After A Call For Help On Social Media Came Out Of Connecticut, The Sheet Metal, Air, Rail And Transportation Workers Joined With Their Union Contractors To Fill The Need, Including Right Here In Western New York

Buffalos SMART Local 71, Its Leadership, Members & Two Area Contractors Have Produced & Donated More Than 40,000 Metal Nose Strips For Masks Worn By First Responders That Are Being Made By Volunteer Groups Across The Country

(BUFFALO, NEW YORK) – The call for help first came out of Connecticut and it mobilized Locals and Members of the International Association of Sheet Metal, Air, Rail and Transportation Workers (SMART) across the United States, who joined together with a host of Union Contractors to make and donate millions of metal nose strips that are being used for First Responder masks that are being made by volunteer groups across the country.

Here in Western New York, SMART Local 71, its Leadership and Members got together with two Union Contractors - making more than 40,000 of the aluminum nose strips.

“Local 71 and its partners ‘are doing all we can to help out during this unnerving time’ of COVID-19.  Our Local, our Members and contractor partners ‘signed on’ to the ‘SMART Nation Wide Million Mask Challenge,’” SMART Local 71 Business Manager Paul Crist tells WNYLaborToday.com. “By doing this ‘we’re helping to support thousands’ of people who’ve volunteered to make face masks - which are being donated to people ‘from all walks of life:’ First Responders, Hospital Workers, Construction Workers ‘and everyday people who need a mask’.  As you know, ‘it’s been a problem getting masks and materials to make them’.  One part is the metal nose strip ‘and we know metal so (the overall effort) was a natural fit and we’re are more than up to the challenge.’” 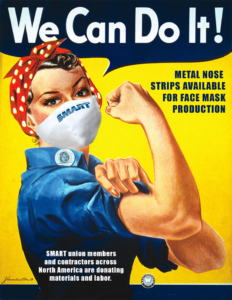 According to a SMART news release, in late March, the Hillery Company, a custom metal fabrication shop located in Groton, Connecticut began posting messages on its Facebook page announcing the company would donate the nose strips to anyone looking to make masks.

“Hillery was asked by a local Nurse to make the aluminum strips used on (N95) masks so they could sew them in the cotton masks being made by volunteers around the country,” said Hillery Employee and SMART Local 40 Member Joe de la Cruz in a message posted to the company’s Facebook page on April 6th. “I posted a picture showing a small box of strips on March 24th and it (went) viral.”

When Crist first saw the Facebook posting, he sent out an e-mail and representatives at both the John W. Danforth Company Plant in Tonawanda and at the Snappy ADP, LLC Plant in Medina (Orleans County) “jumped in right away.” 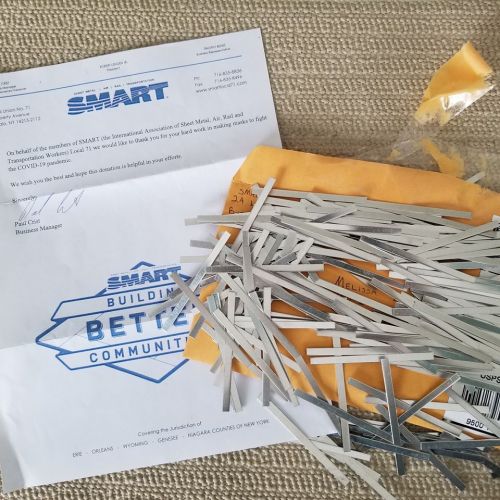 The thin and flexible strips are critical to custom-fitting the top of a mask to a user’s face, making them more effective, less likely to slip off and more comfortable to wear.

SMART’s initial response out of Connecticut immediately grew across the country with SMART Locals and Union Sheet Metal Contractors eager to join the effort and effectively begin crowd-sourcing mass production of the small metal pieces.

Within hours, the Union had more than 100 requests that totaled more than 15,000 metal strips from volunteers making donated face masks from Alaska to Florida.

As each request comes in, SMART assigned it to one of its Locals near the ZIP code of the request.

That individual Local then worked with a Union Contractor in the area to produce the strips and deliver them to the volunteer or organization that requested them.

“We ‘want to do everything we can to help and support’ Health Care Workers and First Responders ‘who are on the front lines helping people and savings lives in our communities during this public health crisis,’” SMART General President Joseph Sellers said. “This is a ‘great idea that began with one’ Union Shop in Connecticut ‘and took off like wildfire.’  We’re now ‘working to scale this up as fast as we can across’ the United States and Canada.”

About 60% of the Local 71’s Membership here in Western New York has been designated as Essential Workers, with some working inside area schools and hospitals, where they’re changing over air filtration systems into reverse air pressure systems that create COVID-18 Treatment Rooms. 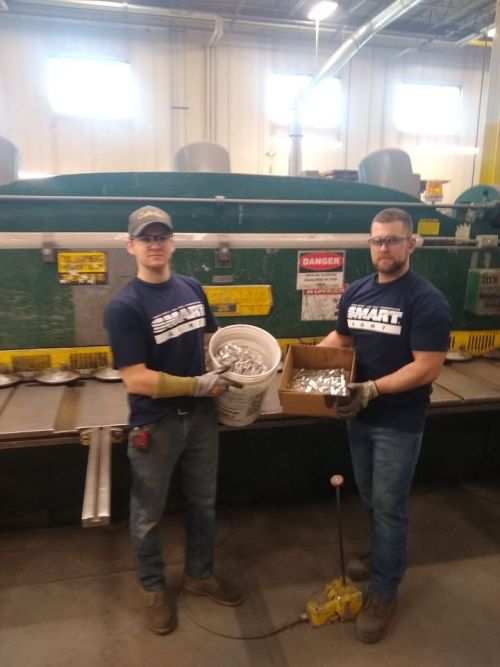 Local 71 Member and Danforth Foreman Dave Sass told Your On-Line Labor Newspaper that he, his fellow Members and the company “were all ‘eager’ to jump in.”

“This is ‘definitely in our wheelhouse,’” he said. “We asked some of the guys in the shop and ‘they wanted to contribute.’  ‘We are all thankful to help.’”

Richard Dellato, who serves as a Project Executive for Danforth, told WNYLaborToday.com: “There ‘was a need out there and we showed our craft’.  ‘Our guys are proud of what they do and we are all glad to donate these nose strips.’  ‘It does make you feel good.’” 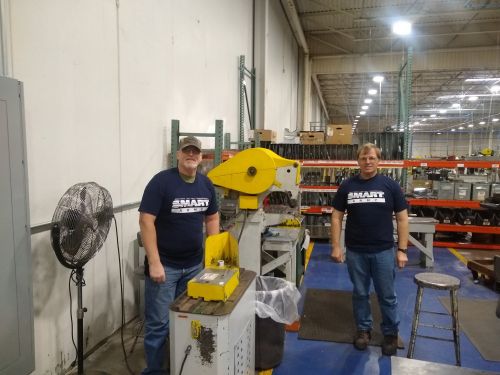 Local 71 Business Agent Time Benes, meanwhile, said he was “so proud” of his Members and the Union Shops that participated in the effort.

“No question about it,” Benes said.

Asked if he thought the general public may now begin developing a new respect for not only all those Essential Workers out there who are doing the work to keep so many Americans safe during the Coronavirus outbreak, but also for Union-represented Workers – who make up a large percentage of First Responders.

“I ‘sure hope so,’” he said.  “While ‘we’re not looking for recognition, this did involve sheet metal and we were a perfect fit.’  ‘We’re just doing the best we can.’”

Photos Courtesy of SMART and SMART Local 71 Via Facebook.