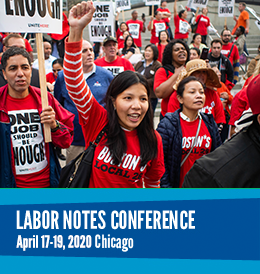 “This is a ‘moment that we won’t get back, and if we’re not careful this moment will dovetail into more austerity,’” she said. “I ‘don’t want to go back to 2008.’  ‘I do not want to go back to what anyone has deemed normal, because normal was insufficient for everyone.’”

Between Zoom and Facebook - 1,300 people viewed the session during its live broadcast and to date, it’s been viewed more than 20,000 times.

This was a substitute for the Labor Notes Conference in Chicago.

It was expected to draw 4,000 people, the biggest yet, but had to be postponed because of the pandemic.

Nurse Kelley Cabrera-Adler, Chapter President of the New York State Nurses Association (NYSNA) at a Manhattan Hospital, described how her Co-Workers came together to organize a protest: “It’s a ‘horrible’ time, ‘but one positive thing is Members are finally starting to realize that we are the ones who can change anything and the power can come from us.’”

Jia Lee of the Movement of Rank-and-File Educators (MORE) Caucus told how New York City had delayed closing schools in the early weeks of the pandemic.

Teacher Union Leaders said they would “agree to disagree” with the mayor.

With lives at stake, “that wasn’t good enough,” Lee said.

Her caucus organized a sickout that forced the city to close the schools.

Since then they’ve teamed up with parent groups to make demands about how on-line instruction goes.

And organizing is attractive, they said.

Lee said the MORE Caucus has seen a 20% increase in Members.

Twenty thousand Postal Workers have joined a new Facebook group where they discuss the crisis.

Retired Letter Carrier Jamie Partridge has been working with a core group to encourage organizing.

Since management is tight-lipped about who has gotten sick, Workers are using an emergency organizing plan to build their own phone trees and self-quarantine plans.

With the Postal Service at risk to run out of money by the Fall, the group is now mobilizing to demand that Congress allocate funds to save it.

United Electrical Workers (UE) President Carl Rosen talked about how his Union has sprung into action to support non-Union Workers.

The Fight of Our Lives is an on-line toolkit that “allows Workers to start organizing without a Union Staff Member to help them,” Rosen said. “This is how they did it in the thirties.”

UE has teamed up with the Democratic Socialists of America to respond rapidly to hundreds of on-line inquiries.

Everyone gets a quick call back from a volunteer who can get them started.

If it looks like a group can mount a full-fledged Union Drive, UE Organizers will help.

Rosen urged the rest of the Labor Movement to follow suit.

“There’s ‘more than enough organizing to go around,’” he said. “I ‘hope many of you take that message back to your unions and push them to take up the challenge of our lives.’”

To Continue Reading This Labor News Report, Go To: https://labornotes.org/2020/04/building-power-pandemic-virtual-labor-notes-conference-draws-thousands