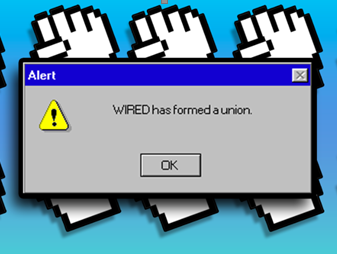 (NEW YORK CITY) - Writers at the Technology Outfit Wired magazine will form an Editorial Union as the publication’s parent company Condé Nast plans deep cuts amid the Coronavirus-fueled economic downturn that has ravaged the media landscape.

Organizers informed magazine managers this week that they will Unionize with the NewsGuild of New York, which represents Staff at a number of other publications including The Daily Beast.

“Wired has always focused on the future, the better to prepare readers for its promise and upheaval,” the Union said in its mission statement. “Now it’s time to secure our own place in that future, with our voices rooted in a workplace of transparency, diversity, and fairness.  As Journalists, we must hold ourselves to the same standards we hold the tech companies we cover. By Unionizing, we earnestly seek to secure the future of Wired and strengthen its claim as the publication best qualified to report on technology and our changing world.”

The Union will likely ultimately encompass the Editorial Staff of nearly 80 people, including Writers, Researchers, Video Producers and other Non-Managers at the publication - making it one of the larger Unions among national magazines.

In the mission statement, Wired’s Unionizing Employees said they seek pay equity among Staffers with the same or similar jobs, increased benefits for contractors or help turning them into Full-Time Staff, and the protection of the magazine’s unique editorial voice.

The Union also said it will focus on increasing diversity at the publication.

The effort comes as Condé Nast openly weighs potential Staff pay cuts or layoffs for a significant portion of the company.

In a memo to staff earlier this month, obtained by The Daily Beast, Condé Nast CEO Roger Lynch acknowledged that the company had lost a significant amount of revenue as a result of the spread of the Coronavirus, which has effectively put a pause on much of the global economy and resulted in a massive decline in advertiser revenue.

Lynch told Staff that, as a result, the company would take cost-cutting measures including temporary salary reductions for those earning more than $100,000 annually, furloughs, and reduced work schedules, project deferrals and layoffs.

“We will still see a substantial impact from this crisis on our business,” Lynch said. “The (executive leadership team) and I recognize it’s very likely our advertising clients, consumers, and therefore our company, will be operating under significant financial pressure for some time.”

Wired Staff have been laying the groundwork to form a Union for more than a year, but as the Coronavirus began to spread, shutting down parts of the economy and resulting in layoffs and pay cuts at numerous publications, organizers realized they had to make a decision: Put Unionization efforts on pause until the company weathered the storm, or go public with the Union amid uncertainty.

Ultimately, Staff decided to slightly accelerate the organizing efforts, partially in order to guarantee Members a greater say in determining how the company takes cost-cutting measures.

To Continue Reading This Labor News Report, Go To: www.thedailybeast.com/wired-staff-unionizing-as-conde-nast-bosses-weigh-coronavirus-layoffs