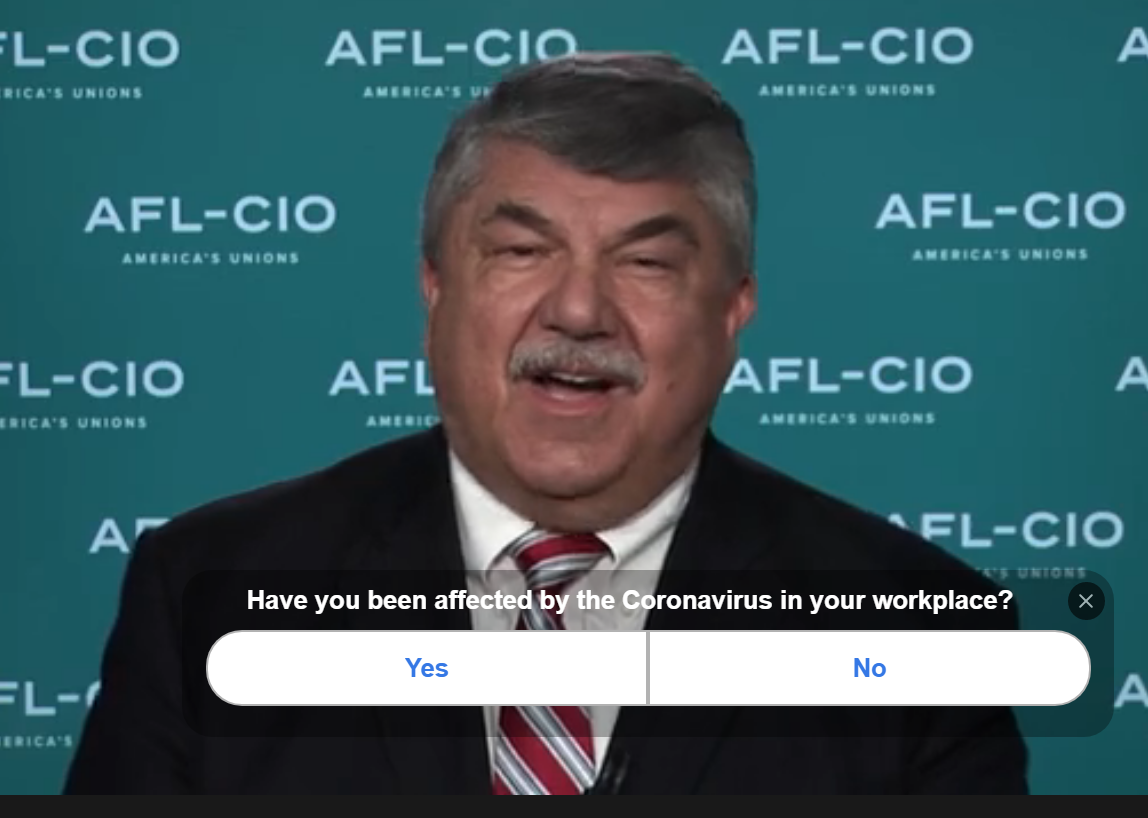 “Workers of ‘every stripe are supporting the sick, the isolated and the vulnerable,’” he said (pictured above) in a Thursday (March 19th) Facebook telecast. “Even ‘in the face of this emergency, Working People are showing no crisis is too great and no task is too small.’”

“Our ‘values are needed more today and more than ever before,’” Trumka declared.

“We ‘can rebuild America and we will,’” once the immediate Coronavirus Pandemic Health Care Crisis has run its course, he said.

But Workers need the Federal Government to step in and provide both guidance and supplies, and they’re not getting that from President Trump, Trumka asserted - and he warned business against taking advantage of the pandemic to both line their pockets and trash their Workers.

Trumka spoke as Congress started work on a $1 trillion-plus emergency spending package designed to help the economy - and workers - against the impact of the Coronavirus Pandemic.

One centerpiece of that package would be $1,000 checks to every U.S. adult, and $500 to every child, to especially help Workers who have lost their jobs due closures in a wide range of industries, from restaurants and hotels to airlines and construction.

The plant closures already show up in Federal Jobless Data.

The U.S. Labor Department’s weekly tally of new unemployment benefits claims jumped by one-third - to almost 270,000 - in one week, and that was before big closures really started to hit.

The virus, officially called COVID-19, has now affected hundreds of thousands of people worldwide, not counting those who are carriers and don’t know it (asymptomatic).

But Workers, especially Health Care Workers, face particular shortages, of N95 masks and respirators to protect themselves as they treat Coronavirus victims, of hospital beds to put those victims in, and of a vaccine against the virus.

Nurses in Ohio “are making their own masks out of hospital gowns,” Trumka said.

Marshaling and providing resources to protect workers and aid victims is where Trump has fallen down on the job, Trumka said.

But that end of OSHA’s rule-making “is ‘part of his pattern,’” Trumka said.

“Instead of ‘strengthening’ Worker protections, ‘(Trump’s) dismantling them,” he said.

“They ‘were woefully unprepared’” Trumka said of Trump and his crew, before demanding the President “put someone in charge to make sure the national stockpile” of N95 masks and respirators and other protective equipment gets to the Nurses and other Health Care Workers.

To Continue Reading This Labor News Story, Go To: www.peoplesworld.org/article/trumka-praises-workers-slams-trump-and-profiteers-on-coronavirus-pandemic/