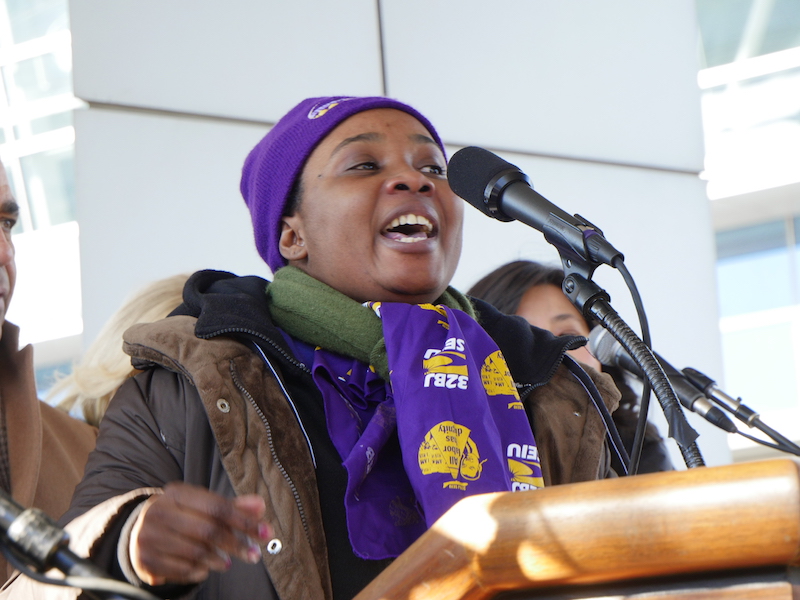 (NEW YORK CITY) - Dozens of 32BJ Service Employees International Union (SEIU) airport Workers may not have been able to take their health concerns to the streets because of the Coronavirus last week, but they still made their voices heard during a tele-conference to state and city officials when it came to fighting for the Healthy Terminals (HTA) Act.

The HTA Bill, introduced in May 2019, has 34 co-sponsorships in the New York State Senate, but because it has been amended three times, it is now going through both the Assembly and Senate’s Labor Committees.

“This year, ‘I was able to get almost every member of the Democratic Conference to sign on,’” Biaggi said. “I ‘can’t see why anyone wouldn’t want this bill because it is common sense and aligns with the values we allege to care about.’”

Biaggi has requested the HTA Bill come out of committee and is currently waiting on the chair to move it on the calendar for a vote.

If it passes through both the Senate and Assembly, it would to be delivered to Governor Andrew Cuomo’s desk for his signature.

Similar to Biaggi, Hyndman was able to get support from her Democratic colleagues in the New York State Assembly: “There are ‘thousands of Bills in the docket and each bill requires a campaign in-and-of-itself.’  This Bill ‘has risen to the level of urgency because of what we are dealing with at the moment’ (with the Coronavirus).”

Unfortunately, as the virus continues to spread, there has been service cuts at airports resulting in Airport Workers being laid off, having hours cut or doing work outside what they have been hired - so they don’t lose their jobs.

“There are Wheelchair Attendants doing cleaning work or security so that they won’t be laid off,” 32BJ SEIU Vice President Rob Hill said. “We are trying to ‘help extend’ sick days and Unemployment Insurance.”

32BJ SEIU is doing what it can to minimize the situation by reaching out to all stakeholders like contractors and the airlines to prevent further layoffs, according to Hill.

“We would ‘much rather have everyone together chanting 32BJ than doing this the way that we are on a teleconference, but that is the urgency of the situation we are in,’” Hill added. “There is an ‘absolute need to get this legislation passed.’  ‘This will happen again.’  ‘The next time, one of these epidemics could happen a year from now or two years from now.’  ‘We could make some good come from this by making the largest workplace in the city (and) Airport Workers have some health coverage.’”

To Directly Access This Labor News Story, Go To: http://laborpress.org/airport-workers-continue-push-for-hta-as-coronavirus-puts-jobs-in-jeopardy/