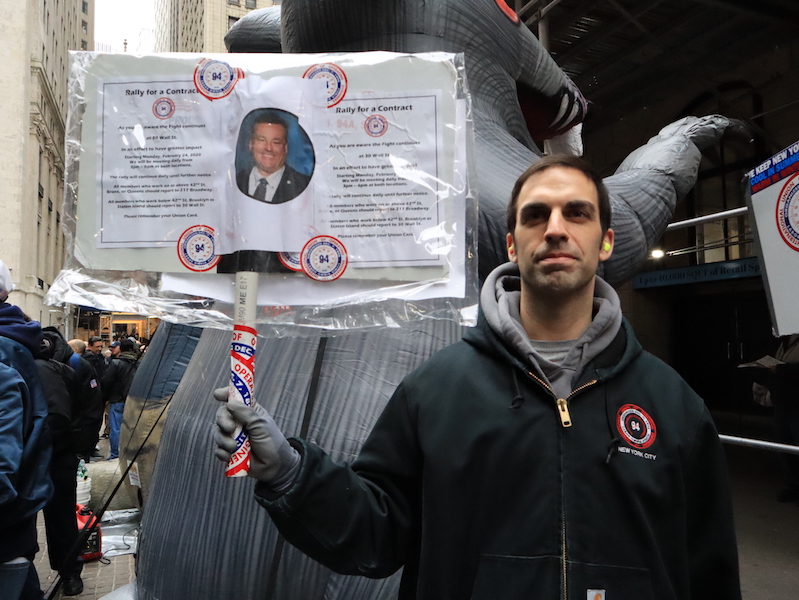 (NEW YORK CITY) – More than 100 Trade Unionists rallied outside 30 Wall Street on Thursday (March 12th) - the latest salvo in an ongoing struggle to win back the jobs of Building Service Workers who were unceremoniously fired and/or had their wages and benefits slashed earlier this year after managers of the post address brought in a Non-Union subcontractor.

“What happened here is that ‘management outsourced their job,’” International Union of Operating Engineers (IUOE) Local 94 Business Agent John Cancel told LaborPress. “The company they outsourced to turned around and said, ‘We are a Non-Union shop and you guys are only going to get fifteen dollars an hour.'”

“We said, ‘no way, no one works for ($15) an hour for what we bring to the table,’” Cancel continued. “We went to management, and they said, ‘The contract is not with us,'” but we know that management ‘calls all the shots.’  ‘That is why we are here.’”

“The new owner of this building ‘kicked out’ two Members of Local 94, ‘then offered them their jobs back at a (75%) decrease with no benefits’ - they were ‘certified to run a building like this,’” an incredulous Baffuto said - shaking his head.

“At Local 94 our ‘main job’ is (High Voltage Integrated Circuitry) and heating and air conditioning, ‘so our licenses are through the Fire Department,” he said.

Union Officials say Local 94 Members need to get a Refrigeration and Machine Operations License to run the turbines for the chillers in buildings, like the one at 30 Wall Street - all of which takes three to five years to acquire.

“They worked here approximately (15 to 30) years,” Baffuto added. “They had ‘little to no forewarning.’  The building was sold, you have income and expenses and these two guys ‘were a part of those expenses - bottom line.’  ‘Then they got a bunch of guys that were Non-Union to replace these two guys, who are now out of work.’”

And now with the outbreak of the Coronavirus - the Workers could not have lost their benefits at a more terrible time.

“They ‘did not only lose all their health benefits - but their pension, annuity and essentially their training benefits as well,’” Baffuto said. “They have ‘no coverage to lean on (now) if something happens to them.’”

But the fight is even broader than that, according to Baffuto: “We are here in these buildings to ‘protect (them) because it is all about fire safety.’  You ‘need certifications to run the equipment - and God forbid if there is a fire - who knows where to go [now] to make sure everyone evacuates properly or to make sure that a sprinkler system is working.’  ‘No one thinks of these things.’”

IUOE Local 94 Trustee Bill Caramico believes this is not just an attack on the Union itself, but on the entire Middle Class: “We ‘are not going to leave until this is over.’  ‘This is what people better start realizing.’  ‘We are here for our children and grandchildren.’”

To Continue Reading This Labor News Story, Go To: http://laborpress.org/iuoe-local-94-steps-up-the-fight-to-save-workers-jobs-at-30-wall-street/