The Current State Of The NLRB: More Than Half Of NLRB Regional Offices Have Top-Level Vacancies, 15 Offices Have Vacancies Or Acting Leadership & Observers Say Effective Management At Regional Level Is Crucial 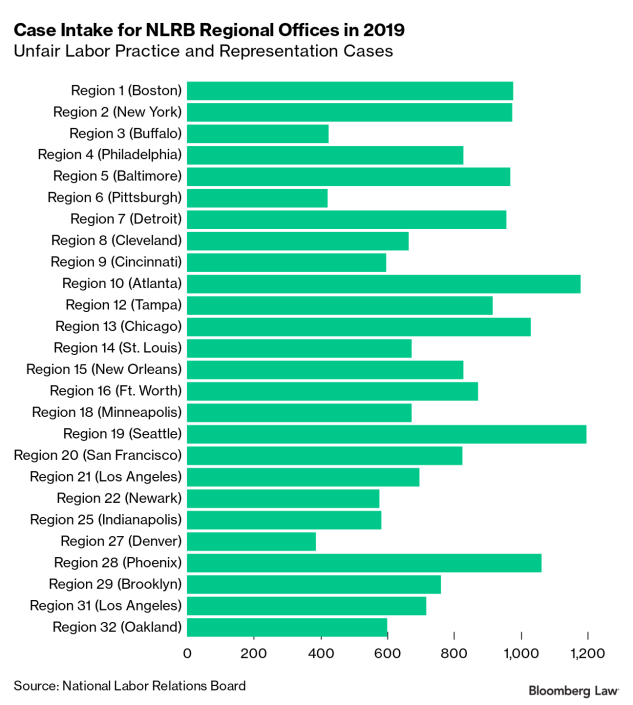 (WASHINGTON, D.C.) - A majority of the National Labor Relations Board’s (NLRB) 26 Regional Offices have at least one vacancy or temporary appointment in leadership, creating top-level personnel gaps that some observers say can hinder the agency’s work and sap Employee morale.

Effective management at the regional level is crucial to the agency’s mission because of the sheer volume of work that the offices handle, former NLRB Officials and Staffers said.

Although Richard Heller was named Acting Regional Director of Philadelphia, his and Marshall’s former spots as regional attorneys remain vacant.

Staffing and management of regional offices have been especially hot points of contention at the NLRB since Peter Robb became the agency’s general counsel in 2017.

Robb considered reorganizing regional operations, but he eventually abandoned that plan after NLRB Regional Directors expressed “grave” concerns over it.

Robb has since downplayed that proposal, repeatedly saying there was no specific plan and he was simply soliciting suggestions for improvements.

The agency’s regional workforce stood at 825 Employees as of September 2019, representing an 11% drop from 2017 levels and a 27% decrease since 2011, according to the Union’s most recent estimates.

The agency encouraged Staffers to leave by instituting early retirement and buyout programs in 2018.

With rising labor costs and a flat budget, the NLRB can afford fewer Workers, Robb has said.

Meanwhile, the agency failed to spend $5.7 million of its budget for fiscal year 2019, which triggered an Inspector General investigation.

“The Agency’s Division of Operations-Management is constantly assessing the needs of each Region based on caseloads,” NLRB spokesman Ed Egee said in an e-mail.

Evidence shows the NLRB is aggressively enforcing Federal Labor Law, he said, pointing to statistics showing that the agency improved its case processing time by 17.5%, nearly meeting its goal of a 20% reduction by 2022 in just one year.

The NLRB is a decentralized agency, with decision-makers distributed around the country and close to the communities where the cases originate, former Agency Staffers and Officials said.

NLRB Regional Offices handle the vast majority of cases filed with the NLRB, settling nearly 6,000 cases in fiscal year 2019, or 99% of the cases that came before them.

The traditional leadership structure at the NLRB’s Field Offices features a Regional Director (RD), who wields power delegated from both the Board and the General Counsel, an Assistant to the Regional Director (ARD), who acts as a Chief of Staff and oversees representation cases and a Regional Attorney (RA), who manages litigation.

To Continue Reading This Labor News Story, Go To: https://news.bloomberglaw.com/daily-labor-report/more-than-half-of-nlrb-regional-offices-have-top-level-vacancies