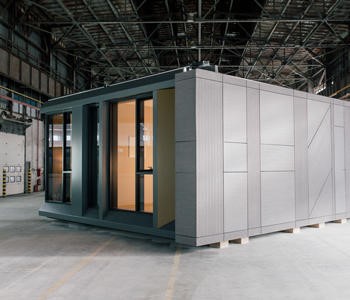 (NEW YORK CITY) - Industry insiders are calling the tallest modular hotel in the world a “milestone” and a “game-changing symbol” - what they are not talking about is how the 26-story building rising 360 feet over Sixth Avenue in New York City, along with other similar developments around town, are shutting out American Workers on their own soil.

“You ‘can’t stop’ progress, ‘but you can make progress fair,’” New York Metal Trades Council President Jimmy Hart tells LaborPress. “I ‘believe’ Union Labor in New York City ‘is committed to a fair’ economic system – ‘not only don’t we not want to stop’ progress, ‘we want to be part of the progress.’”

But that’s not what developers of an emerging building method using prefabricated modular units constructed on the cheap in places like Russia, Poland, Germany and Denmark want.

By utilizing stackable modular units delivered to the job site already fully constructed and completely outfitted down to the bedding and toiletries - developers, like the ones behind the AC Hotel New York NoMad at 842 Sixth Avenue, can put up a building quicker and with two-thirds fewer Workers than traditional construction projects.

“We’re building ‘lots’ of modular hotels in New York City,” Hart said.  “And if they’re manufactured in New York City, employing New Yorkers, ‘that’s one thing.’  ‘But when they’re getting manufactured overseas in places like Poland, Russia, Germany and Denmark - the American Worker does not benefit from that.’  The ‘only’ people that benefit ‘are the corporations.’”

In the not too distant future, Hart predicts prefabricated modular construction will become the dominant method of construction in New York City, with new hospitals, schools, and cultural institutions being built by non-traditional means.

“Picture this,” says Hart. “(The AC Hotel New York NoMad) is going to be fabricated in Poland.  I’m told it takes ‘ninety days’ to fabricate.  They’re going to load it on ships, sail it across the ocean, drop it on a pier in Brooklyn, then truck it over to the site  - ‘and all that (U.S.) labor is lost.’”

But what about the Build American mantra?

Yeah, what about it?

The New York State Department of Labor says the AC Hotel New York NoMad on Sixth Avenue is a private development - and, therefore, the agency “does not have a role in this particular project.”

Neither Mayor Bill de Blasio nor Governor Andrew Cuomo has responded to requests for comment.

“New York City’s Trade Unions ‘are ahead of the curve on this,’” Hart says. “They’re working with one of the world’s largest fabricators in the Brooklyn Navy Yard.  There’s a facility in place ‘waiting to do this work’ – ‘no need to sub it out to Poland.’  ‘You could put New Yorkers to work, still reduce the cost and take the benefit of modularization and manufacturing costs, and do it right there in New York City.’”

To Continue Reading This Labor News Report, Go To: http://laborpress.org/the-future-of-construction-is-here-and-american-workers-are-being-cut-out-of-it/