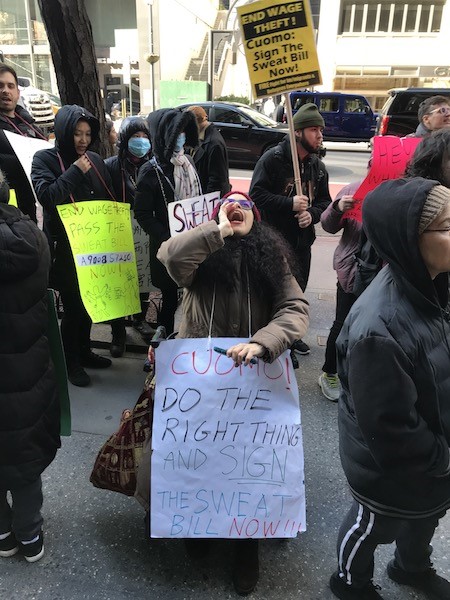 (NEW YORK CITY) - More than 150 people rallied outside Governor Andrew Cuomo’s Manhattan offices on Monday (March 2nd), demanding Cuomo stop blocking a Bill that would allow Workers to put liens on the property of employers that are accused of wage theft.

“The Governor ‘has once again failed to take action against wage theft,’” Sarah Ahn of the Workers Against Wage Theft Coalition told the rally.

Cuomo vetoed the Securing Wages Earned Against Theft (SWEAT) Bill, passed by the New York State Legislature last June, in January.  It would have enabled Workers whose claims are likely to succeed to freeze their employer’s assets, paralleling the “Mechanic’s Lien” that a landscaper or construction contractor can use against homeowners who haven’t paid their bills.

Cuomo said in his veto message that letting Workers or the state put a lien on employers’ property before the courts or state agencies had issued a judgment against them would be considered “inadequate due process.”

SWEAT Bill supporters argue getting liens before the process starts is necessary to prevent employers accused of wage theft from transferring or hiding their assets before a judgment is issued, so Workers awarded back pay can actually collect what they’re owed.

Last Summer, Mahoma Lopez of the Laundry Workers Center told LaborPress, when the Sunshine Shirt laundry in Brooklyn’s Bay Ridge neighborhood was ordered to pay $75,000 in back wages, that it closed and reopened three weeks later - supposedly under new management.

It had been accused of paying Workers less than Minimum Wage and not paying them overtime.

“It is ‘different management, but we don’t know who it is in reality,’” Lopez says. “(Liens are) the ‘only way we can prevent wage theft by employers who play with the system.’  ‘They know there are no repercussions.’”

“Right now, ‘there’s no lien possibility for most Workers,’” JoAnn Lum of National Mobilization Against Sweatshops told LaborPress. “Cuomo ‘has made’ New York ‘a sanctuary for sweatshop businesses.’”

Attaching assets, the Securing Wages Earned Against Theft Coalition argues “is a critical tool to prevent employers from disposing of property after being sued and before a court renders a judgment.”

Current law, it says, requires an Employee seeking an attachment to show the employer has an “intent to defraud” by transferring or hiding property, which is almost impossible to prove.

There is also no way for Employees to learn the identity of the owners, it adds.

The liens the SWEAT Bill would allow are fair to employers, Lum says, because they’re temporary - lasting one year unless the state Labor Department or Attorney General extends them.

Employers would be able to challenge liens by asking the Worker to provide itemized details about what they’re owed or remove them by either paying the back wages or posting a bond until the case is resolved.

If a court determines the Worker willfully exaggerated how much they’re owed, the lien would be voided.

Workers in New York are cheated out of about $1 billion a year, the Coalition estimates.

Lum says wage theft happens in “all kinds of industries,” but is most common in Non-Union construction and low-wage service jobs, such as restaurants.

To Continue Reading This Labor News Story, Go To: http://laborpress.org/cuomo-refuses-to-talk-with-wage-theft-protesters/