Strike Threat Gets Union Machinists & Electricians A New Contract After Two Years Of Negotiations With Raises Of Up To $10,000 At Nabisco Bakery In Oregon 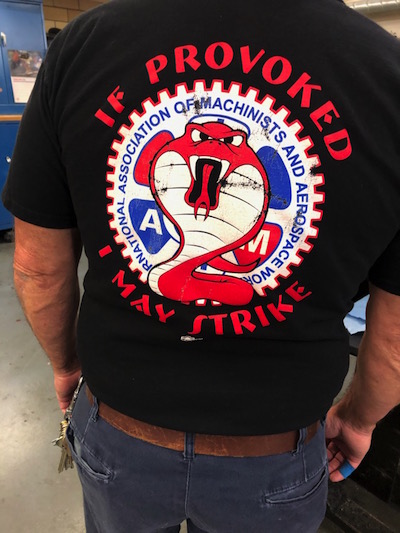 (PORTLAND, OREGON) - After two years of contract negotiations, it was only then that 32 Union Machinists and 10 Electricians employed at Mondelēz’ Portland Nabisco Bakery in Portland started preparing for a Strike after it became apparent their employer would not give them an acceptable offer.  Now, Members of the International Association of Machinists (IAM) Local Lodge 63 and International Brotherhood of Electrical Workers (IBEW) Local 48 have ratified a pair of Union Contracts that raise wages $6,000 to $10,000 year or more.

Members of the two Unions work together to maintain and repair the machines that turn flour and sugar into Oreo Cookies and Ritz Crackers.

Their Unions also negotiate together, but for the longest time, it wasn’t going well.

Mondelēz had pushed proposals the Union Members wanted no part of, like a shift to a work-week of three 12-hour days.

“In terms of the duration and the amount of effort it took to get a contract, ‘it was like nothing I’ve experienced,’” IBEW Local 48 Business Representative Mike Bridges, a Union Negotiator since 2011, said.

Six Union Members and Staff met with six company negotiators 41 times over more than two years.  So high was Mondelēz management turnover that of the six original management negotiators, only one was still there at the end.  The final session, brokered by Federal Mediator Darrell Clark, lasted 9 a.m. to midnight.

So, what made the difference?

IAM Chief Steward Jeff Obermiller says without question it was Members demonstrating to the company that they were ready to Strike.

When Mondelēz said its offer wouldn’t get any better, the two Unions took it back to Members, who rejected it and voted unanimously to authorize a Strike.

In the weeks that followed, Workers blew whistles on the way in and out of work, and arrived at work wearing Union T-shirts.

Machinists’ shirts pictured a coiled cobra over the Union Logo along with the words: “If provoked I may strike.”

Electricians’ shirts read: “Lightning makes no sound … until it strikes!”

Machinists also ended their shifts by lining up their massive wheeled tool boxes near the building exit, to make it clear they were ready to roll on out if a Strike was called.

The Unions also sought support from the rest of the Labor Movement and got Strike sanction from the Metal Trades Council of Portland and Vicinity and the Northwest Oregon Labor Council.  That support meant that if and when they struck, not only might the machines begin to sputter, but product might have trouble getting out of the plant with picket lines turning back Teamster Drivers.

For the Machinists, the new contract contains an immediate wage increase of 9%, bringing the base wage from $30.30 to $33.12 an hour.

They’ll also get back-pay checks of over $4,000 for wage increases that should have taken place earlier - 2% annual raises dating back to January 1st, 2018.

To Continue Reading This Labor News Story, Go To: https://nwlaborpress.org/2020/02/machinists-and-electricians-get-raises-of-up-to-10000-at-nabisco/?fbclid=IwAR031_8yRW1OErdBlCSDvYN2NS3FFN8WKOczMqivjiWD3bXy51IK39LoC4o