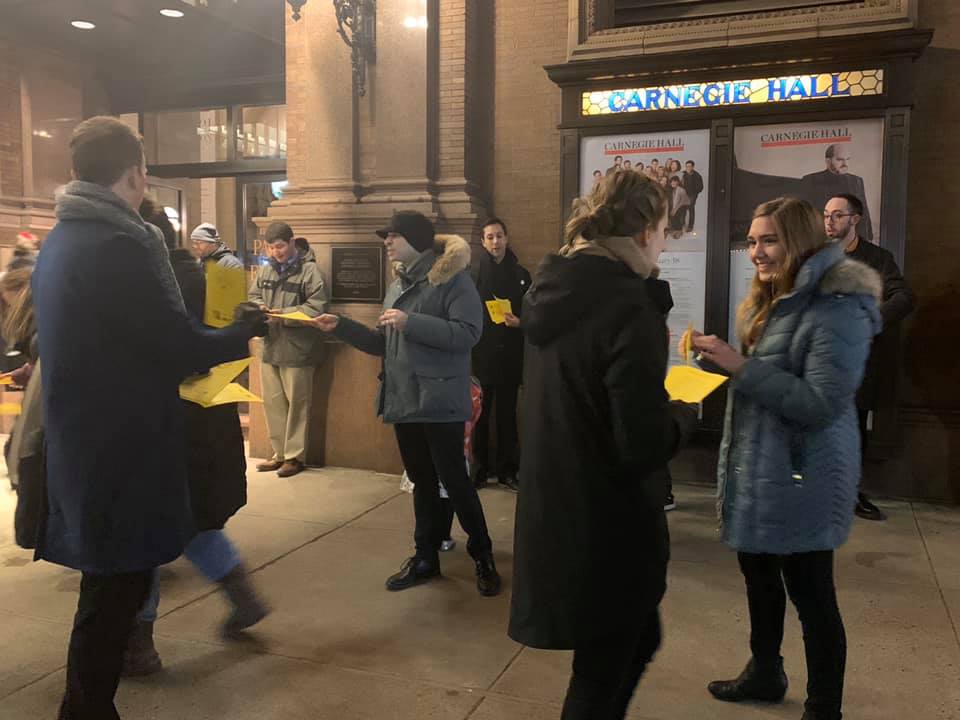 (NEW YORK CITY) – Union-represented Musicians who perform with Distinguished Concerts International New York (DCINY), a producer and presenter of music at Carnegie Hall and Lincoln Center, are fighting for their first contract.

Over the Summer, DCINY Orchestra Musicians voted to Unionize by an 89% "Union Yes" vote, but after three rounds of bargaining, management and the musicians are still far apart from agreeing to the industry standards that the Musicians seek.

So, recently, the Musicians took their campaign to the audience for the first time.

Before DCINY's February 16th and February 17th concerts at Carnegie Hall, Musicians handed out flyers to audience members featuring the roster of Musicians playing each night, since Musicians are not currently listed in the program.

Over the past 11 years, Distinguished Concerts International New York (DCINY) has operated as a producer and presenter of music at Carnegie Hall and Lincoln Center.

For many of their choral concerts, DCINY assembles choirs of amateur Singers from around the world who pay a fee for the unforgettable experience of performing in one of New York’s top venues.

DCINY then hires an orchestra, soloists, and conductors to give the choir members a concert of a lifetime.

While the musicians of the DCINY Orchestra enjoy the work, it often involves unreasonably long rehearsals with inadequate breaks, intense, physically-demanding performance days and an atmosphere of fear due to frequent retaliation for voicing concerns to management, Union Officials said

Making matters worse is the fact that the Musicians still do not have a contract, do not receive benefits of any kind and have no guarantee that we will be hired for future engagements.

As a result, the Musicians came together to Unionize the DCINY - with the support of American Federation of Musicians (AFM) Local 802 AFM, and subsequently negotiate a fair Collective Bargaining Agreement that allows Musicians to express their concerns without fear of retribution.

As contract talks continue, DCINY Musicians say they are grateful for solidarity from the larger Labor Movement and ask that their allies follow their fight on Social Media @DCINYOrchestra on Facebook, Twitter and Instagram.