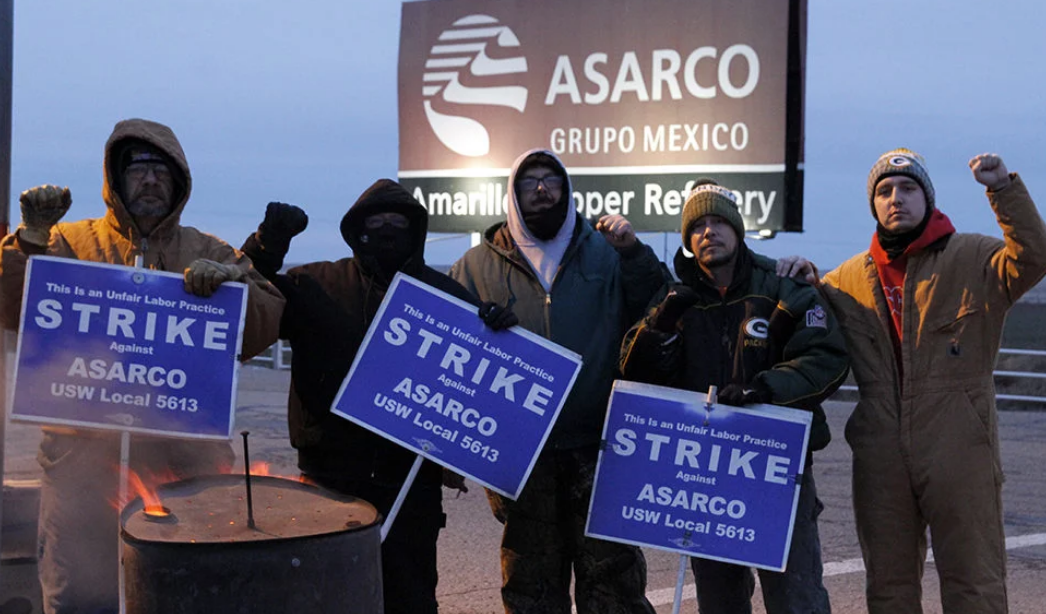 (AMARILLO, TEXAS) - It’s a February evening in the Texas Panhandle and its cold as hell. Five men stand on the shoulder of Highway 136 northeast of Amarillo, huddled around a fire in a 55-gallon oil drum.  Patches of snow linger from a morning flurry and barren fields cut none of the whipping wind.  In the distance, a power plant and a copper refinery dot the sparse horizon.

On a normal day, the men might be working at the refinery, turning 2,000-degree molten metal into thick slabs and coils suitable for manufacturing.

Instead, for the past four months, they’ve taken shifts standing along that highway, cheering as passing tractor-trailers honk in support or jeering as a few colleagues arrive to go to work.

In the GOP stronghold that is the Panhandle, these are Union Workers and they’re on Strike.

“Whether ‘we’re out here two more months or five more months, we’re all gonna stick together,’” says Thaland Roberts, a 55-year-old bear of a man who’s put in 31 years at the copper facility.

Roberts’ father-in-law and uncle worked at the plant and now his 30-year-old son does too.

Roberts is one of about 150 United Steelworkers (USW) Members on Strike from the Amarillo copper refinery, which is owned by Tucson-based Asarco LLC.

More than 1,500 additional Workers are on strike at the company’s mines in Arizona.

In 1999, Asarco was bought by Grupo Mexico, a massive Mexico City-based mining and railroad conglomerate that’s played hardball with its Unionized American Workers.

Roberts and his Co-Workers haven’t seen a raise in a decade and now the company wants to freeze pensions and hike employee contributions to health insurance.

“Its ‘tough,’” says Tannen Andrews, a baby-faced 23-year-old who monitors acid and chemical mixtures at the refinery.

Andrews has picked up part-time work at Walmart and the Union helps him pay monthly bills and provides emergency-only health insurance after Asarco cut off coverage.

“Kids ‘need clothes and I can’t afford that right now,’” Andrews says, jamming his hands into the pockets of his insulated coveralls. “She’s ‘eating more too and I can’t spend what I’d want on groceries.’”

Standing next to Andrews is his father, Jerry, who also works at Asarco - the company gives hiring preference to Employees’ family members.

Four years ago, when Andrews found out his fiancée was pregnant, Jerry encouraged him to apply at Asarco.

“Now I look back and it’s like, ‘Damn, did I lead him in a wrong direction?’” Jerry says.

After years in construction, driving a forklift at Asarco for $20 an hour is the best job Jerry’s ever had - but he thinks the company’s owners want to change that.

“It’s ‘just greed,’” he says, lighting a cigarette. “They ‘want to break the Union and bring in new people they can pay less.’”

To Continue Reading This Labor News Story, Go To: www.texasobserver.org/amarillo-asarco-copper-strike-union/?fbclid=IwAR3Y8UxOuAYQJwZa5-40_4bIgZaVjXw8hdr01kxCofRJ3iVCMaQmYawoeZs