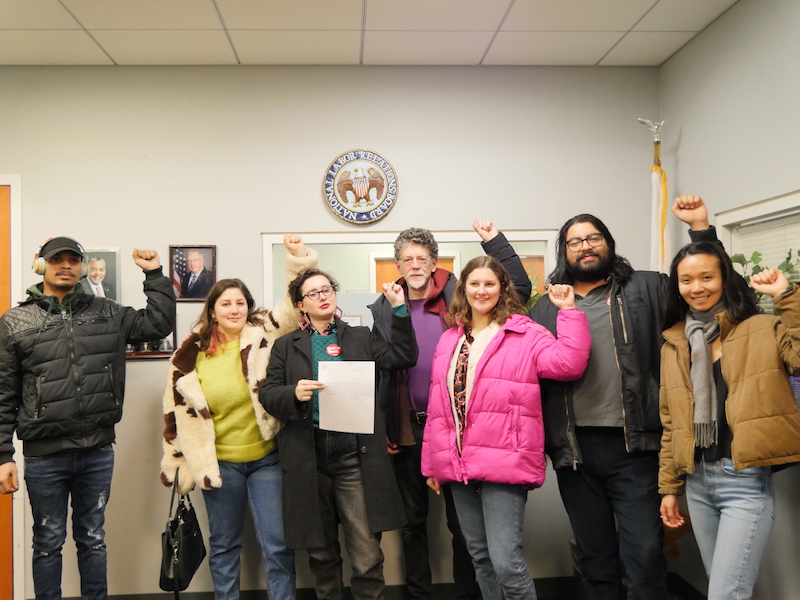 (BROOKLYN, NEW YORK) – Housing Works Employees striving to Unionize with the Retail, Wholesale and Department Store Union (RWSDSU) have officially filed for a Federal Election with the National Labor Relations Board (NLRB) - and although it might have been just what the advocacy group’s CEO wanted all along, they are confident they will win.

Housing Works Employees endeavoring to Unionize in the face of low pay, inadequate health insurance, insufficient time off and high turnover rates, have spent months hoping organization CEO Charles King would sign onto a neutrality agreement.  But King, while insisting that he and the Housing Works leadership are not Anti-Union, has steadfastly refused to do so.

In fact, King just refused another request from Workers to voluntarily recognize the Union.

On St. Valentine’s Day, a delegation of Housing Works Employees left their Lawrence Street Offices in Downtown, Brooklyn and marched more than 400 Union Cards over to the local NLRB outlet located at 2 Metro Tech.

“It ‘could be what he wanted all along - I don’t know,’” Adam Obernauer, RWDSU Director of Retail Organizing told LaborPress. “We ‘didn’t want to go ahead and file with the NLRB because we wanted to find a process that was mutually agreed upon, that was less stringent upon the strict guidelines’ of the NLRB.”

With about 600 Housing Workers in total, Union supporters are confident they have the overwhelming numbers needed to duly designate RWDSU as their workplace representatives.

But it won’t be a slam dunk given the make-up of the NLRB under the Republican Trump Administration.

RWDSU views Workers who signed Union Cards as one Bargaining Unit - a position King and the Housing Workers leadership could challenge.

“They ‘could challenge that, they could challenge many things throughout the process because the NLRB is not necessarily favorable to Working People today’ under the Trump administration – ‘that’s the risk that we run,’” Obernauer said. “But because we ‘couldn’t come to an agreement, we had to move forward in this way.’”

To Continue Reading This Labor News Story, Go To: http://laborpress.org/housing-works-employees-file-for-nlrb-election-confident-in-union-victory/