A Raise To $11 An Hour? Thats Still Not Enough, Union Says At Protests That Took Place At 16 U.S. Airports 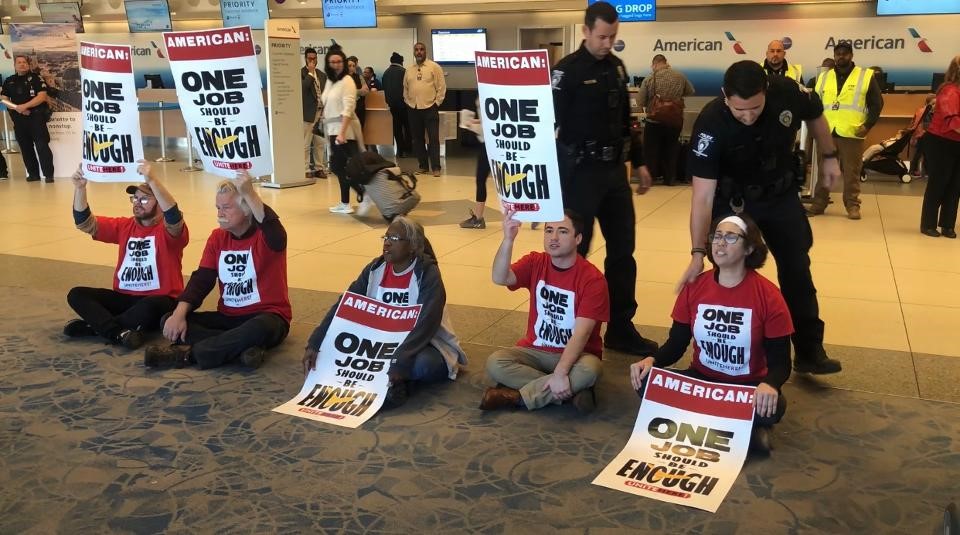 (CHARLOTTE, NORTH CAROLINA) - A Labor Union, working to boost compensation for low-paid Airline Catering Workers in Charlotte - a task in which it appears to have partially succeeded even as contract talks continue - staged a demonstration late last week at Charlotte Douglas International Airport.

Although orderly, the demonstration resulted in five arrests, prearranged with Charlotte police, after Union Members gathered near an American Airlines ticket counter and chanted: “One job should be enough” for about 15 minutes.

Two hour earlier, about 75 Members of the Union, UNITE HERE, demonstrated on Wilkinson Boulevard near the airport.  Like the airport event, the roadside demonstration was orderly, never impeded the flow of traffic and was covered by only a single reporter (me).

Charlotte media generally chose to cover the simultaneous appearance of Presidential Candidate Bernie Sanders a few miles away - even though the arrest of demonstrators at Charlotte Douglas International Airport is rare and perhaps unprecedented.

While the events drew only modest attention, it cannot be said UNITE HERE has lacked impact in Charlotte.

LSG Sky Chefs, which employs about 170 Workers at its Charlotte kitchen, said recently it would give its lowest paid, starting salary Charlotte Workers a raise to $11 an hour from $8.40 an hour, effective February 28th.

“It’s a ‘step in the correct direction, but there’s no victory in Charlotte,’” said Damiana Dendy, a UNITE HERE Research Analyst who managed the demonstrations. “Wages went up, (but) we’re asking for ($15).  Health care ‘did not change.’  ‘It still costs’ ($500) a month for a family plan.”

Now, they will rise to fifth with the pay raises.

A spokesman for LSG Sky Chefs said the pay raise resulted not from Union activity, but rather were “just the normal course of business.”

UNITE HERE represents about 20,000 Workers in the airline catering business, which is dominated by two companies, LSG Sky Chefs and Gate Gourmet, which operate kitchens in about two dozen U.S. cities.

Before a series of airline bankruptcies early this century, airlines operated kitchens, including the Charlotte kitchen, but now only United still employs Catering Workers.

UNITE HERE is engaged in contract talks with both companies.

On Friday (February 14th), the Union demonstrated at 16 U.S. airports including 14 hub airports.

All three major airlines - American, Delta and United - were targeted.

In a press release, the Union noted that while Delta recently paid out $1.6 billion in profit sharing to Employees: “Over 38% of catering workers serving Delta at its hubs in Minneapolis and Detroit rely on Government Health Care Programs for themselves or their children.”

The Union said the dominance of the American hub, which accounts for 91% of the airport’s passengers, has led to the low wage structure for Catering Workers.

To Continue Reading This Labor News Story, Go To: www.forbes.com/sites/tedreed/2020/02/15/as-kitchen-workers-get--raises-to-11-hourly-labor-union-keeps-up-the-pressure-with-airport-protests/?fbclid=IwAR0tBo7TTqCPRBIjzduMWfwIO_-j34E98x8As7wJsTqkbEBk09Ad03a9yTg#757bcda6d7d8