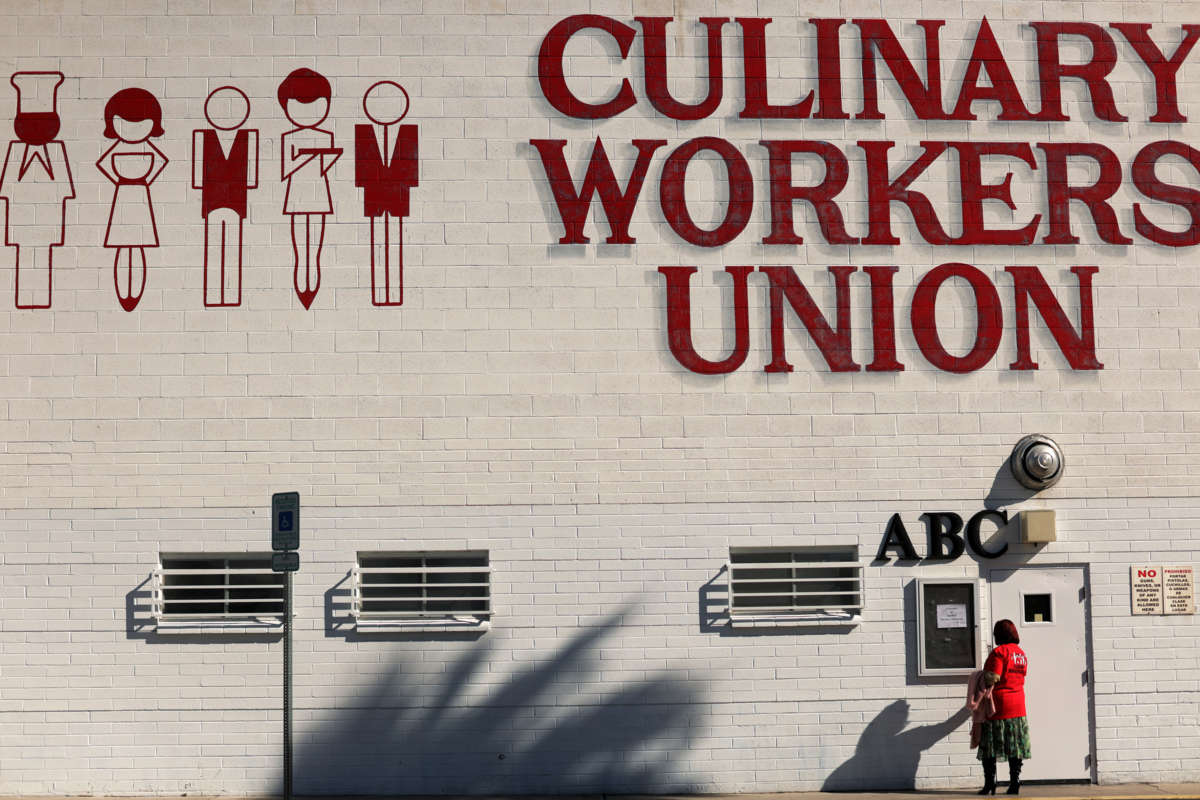 On February 12th, Sanders responded: “Many, many Unions throughout this country - including some in UNITE HERE, and the Culinary Union is part of UNITE HERE - absolutely understand that we’ve got to move to Medicare for All.”

Sanders continued: “When everybody in America has comprehensive health care and when we join the rest of the industrialized world by guaranteeing health care to all people, Unions can then negotiate for higher wages, better working conditions, better pensions.  So, I think the future for Unions is through Medicare for All.”

After Sanders’s statement, the Culinary Union’s Secretary-Treasurer Geoconda Argüello-Kline denounced Sanders and his supporters, stating: “It’s disappointing Senator Sanders’ supporters have viciously attacked the Culinary Union and Working Families in Nevada simply because we provided facts on proposals that might take away what we have built over eight decades.”

The Culinary Union was joined in denouncing the Sanders camp by fellow Democratic Presidential Candidates Elizabeth Warren and Amy Klobuchar.

On February 13th, Pete Buttigieg joined with Klobuchar, Warren and the Culinary Union in promoting condemnations of the Democratic front-runner and Medicare for All.

Flashback to September 17th, 2019: General Motors confirmed to the press that it had ceased payment for the health care coverage of striking United Auto Workers (UAW).

On the same day, Presidential Candidate Joe Biden addressed members of the AFL-CIO on his health plan, stating: “I have a significant health care plan.  But guess what?  Under mine, you can keep your health insurance you’ve bargained for if you like it.”

For the striking UAW Members, the choice of keeping private health insurance that was bargained for wasn’t an option.

Talking points touting “choice” have frustrated advocates of Medicare for All and sympathetic Union Members this election cycle.

Earlier on February 12th, Buttigieg joined Biden and company in echoing familiar “choice”-focused talking points, tweeting: “There are 14 million Union Workers in America who have fought hard for strong, employer-provided health benefits.  Medicare for All Who Want It protects their plans and Union Members’ freedom to choose the coverage that’s best for them.”

Sara Nelson, President of the Association of Flight Attendants (AFA), fired back: “This is offensive and dangerous.  Stop perpetuating this gross myth.  Not every Union Member has Union Health Care Plans that protect them.  Those that do have it, have to fight like hell to keep it.  If you believe in Labor then you’d understand an injury to one is an injury to all.”

Nelson later joined the Culinary Union leadership in denouncing “attacks” from Sanders supporters, rather criticisms of Union Management not directed at the Rank and File.

But Nelson has been a consistent advocate of Medicare for All and the AFA has stood with Sanders since 2016.

To paraphrase Nelson and her advocacy, Medicare for All is popular among Organized Workers.

The 150,000 Members of National Nurses United (NNU), the U.S.’s largest Union of Registered Nurses, have organized the charge on behalf of patients and fellow Workers.

And the NNU and AFA aren’t alone.

Even with strong support from many Rank and File Members, some Union Leaders have shied away from Medicare for All in order to adjust their sails to the political winds at a moment’s notice.

To Continue Reading This Labor Perspective, Go To: https://truthout.org/articles/medicare-for-all-helps-unions-by-taking-health-care-off-the-bargaining-table/