Labor Perspective From Pulitzer Prize-Winning Journalist Michael Hiltzik: Trump Has Turned The Department Of Labor Into The Department Of Employer Rights 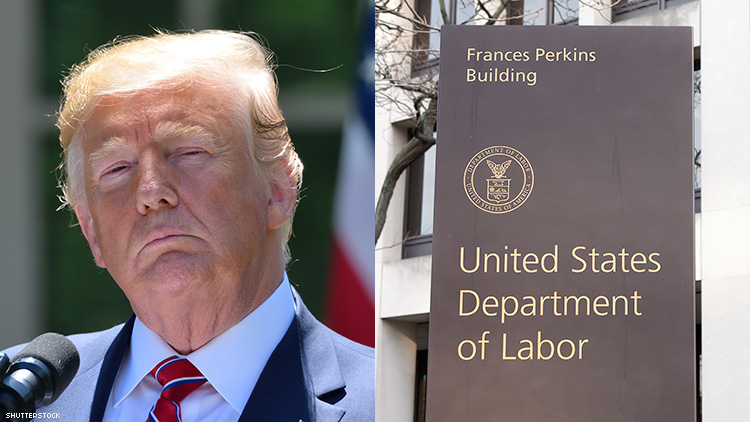 L.A. Times Editor’s Note: Pulitzer Prize-winning Journalist Michael Hiltzik writes a daily blog appearing on latimes.com.  As a member of The Los Angeles Times Staff, he has been a Financial and Technology Writer and a Foreign Correspondent.  He is the author of six books, including: Dealers of Lightning: Xerox PARC and the Dawn of the Computer Age and The New Deal: A Modern History.  Hiltzik and colleague Chuck Philips shared the 1999 Pulitzer Prize for articles exposing corruption in the Entertainment Industry.

No advocates for Workers’ Rights or Labor were especially surprised when Republican President Donald Trump nominated Eugene Scalia for U.S. Secretary of Labor, succeeding the utterly discredited Alex Acosta.  Scalia - the son of the late Supreme Court Justice Antonin Scalia - had made his reputation in Washington as a lawyer for big corporations resisting labor Regulations, after all.  He had helped Walmart overturn a Maryland Law mandating minimum contributions by big employers for Workers’ health care, defended SeaWorld against Workplace Safety Charges after a Park Trainer was killed by an Orca (he lost that case), and had written extensively against a Federal Regulation expanding Ergonomic Safety Requirements.

Despite his positioning himself during his Presidential Campaign as a flag carrier for the Working Class, Trump has rolled back numerous Pro-Worker Regulations from the Obama era and before.

He talked a good game about bringing back manufacturing and coal jobs, but that hasn’t materialized.

Trump’s steel tariffs are credited with saving some 12,000 steel manufacturing jobs, but at the enormous cost to the economy of an estimated $900,000 per job.  That’s paid by steel users, including automakers and other manufacturers.

General Motors (GM) says it took a $1-billion hit in 2018 from the tariffs.  That contributed to its decision to shed 14,000 jobs globally and to shutter its assembly plant in Lordstown, Ohio, costing 900 jobs.

Although Trump attacked GM Chief Executive Mary Barra for the decision, he also turned his ire on the United Auto Workers (UAW) and AFL-CIO leaders, calling them “not honest people” and blaming high Union Dues for the Lordstown closing.

Just to let everyone know - Union dues are paid by workers, not employers.

Hourly wages for Rank-and-File Workers are up since Trump’s inauguration, but only at a measly rate after inflation.

Wages rose about 3.1% in June over a year earlier, but with consumer inflation running at 1.6% during the same period, the real gain for Workers was a mere 1.1% in a year.

The real hubs of Trump’s attack on Workers are the Department of Labor and the National Labor Relations Board (NLRB).

These bodies were established to protect Worker Rights.

As we’ve reported before, under Trump they’ve become the advance guard in eviscerating those rights.

Through those agencies, writes Pedro Nicolaci Da Costa of the Labor-oriented Economic Policy Institute (EPI): “Trump is pursuing the most hostile Anti-Labor agenda of any modern President.”

To Continue Reading This Labor News Story, Go To: www.latimes.com/business/story/2019-07-22/trump-attack-on-labor?fbclid=IwAR2ccTM-XOlZoRvwz174_mvhvLgPjDWHmiVMbbOL9rNRZ23y017GNc4CCG4