The Largest Federal Employee Union Punches Back At President Trump 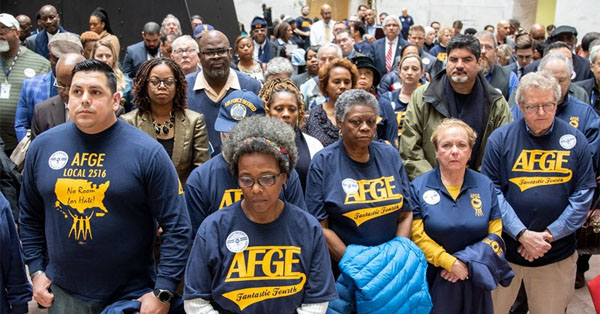 (WASHINGTON, D.C.) – As President Donald Trump continues battering Federal Employees, their largest Union sent him a rousing retort this week that it might be bloodied - but not busted.

Delegates to the American Federation of Government Employees (AFGE) Legislative Conference were fired up by high-profile speakers, including House Speaker Nancy Pelosi (Democrat-California) and three Republicans, who pledged their support as Trump continues to push policies that would hit the Workers' wallets and the ability of Unions to represent them.

Even as they were meeting in the Hyatt Regency Capitol Hill Hotel, Trump released a Fiscal 2021 Budget proposal that would make most Federal Employees pay more for a cut in retirement benefits.

And, in a January 29th memo, first reported by Government Executive, Republican Trump gave Defense Secretary Mark Esper the power to stop collective bargaining with Federal Unions.  "Where collective bargaining is incompatible with these organizations' missions," the memo says, "the Department of Defense should not be forced to sacrifice its National Security Mission."

Everett Kelley, the Union's Secretary-Treasurer and acting President, said: "Denying nearly half a million Defense Department Workers the Collective Bargaining Rights guaranteed to them by law since 1962 ‘would be a travesty’ - and doing it under the guise of 'national security' would be a ‘disgrace to the sacred oath and obligation that all Federal Workers make to their country.’  This administration ‘will not stop until it takes away all Workers' rights to form and join a Union and we will not stop doing everything we can to prevent that from happening.’"

They have some powerful help - namely Pelosi, who was greeted as a hero and welcomed with a long and loud standing ovation.   “When you get into the arena with Trump,” Pelosi said to cheers, "you ‘have to be ready to take a punch - you got to be ready to throw a punch.’"

The punches they have taken include three 2018 Executive Orders that made it more difficult for Labor Organizations to organize and represent Federal Staffers, but Labor punched back and recently won 12 weeks of Paid Parental Leave and a 3.1% pay raise for 2020, despite initial opposition from Trump, who earlier had proposed a pay freeze.

In addition, the House has approved the Protecting the Right to Organize (PRO) Act, which would strengthen the ability of Workers nationally to organize.

Passage in the Republican-controlled Senate is doubtful, yet the same once was said about the Parental Leave and Pay Raise Bills that are now law.

Securing Pelosi's attendance was quite the attraction for the Union Members, particularly after her high-profile, speech-ripping confrontation with Trump at his State of the Union address.

To Continue Reading This Labor News Story, Go To: www.stripes.com/news/us/the-largest-federal-employee-union-punches-back-at-president-trump-1.618343?fbclid=IwAR2prOyEElSyLwZFpA_C5GkHb6Lf7lhajalmSLnvGkJF977vYBwKjVBFsP8#.XkN17ht7WEV.facebook