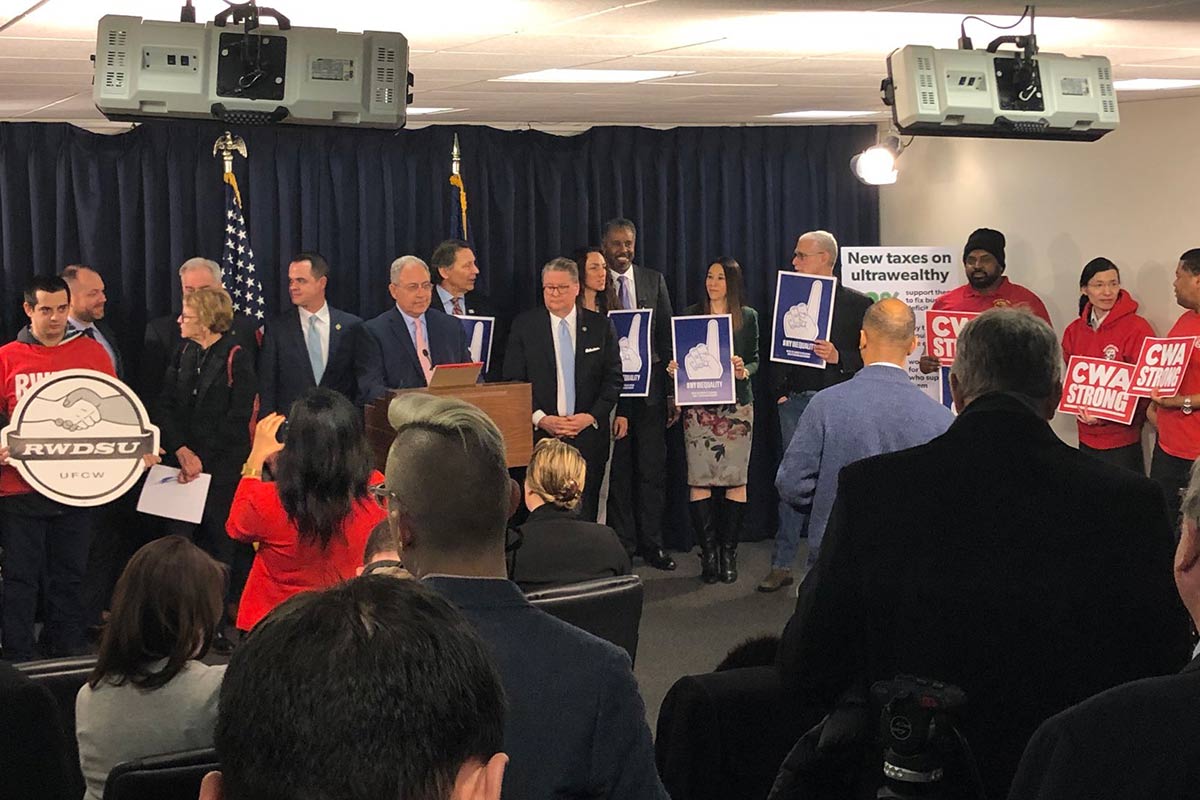 (ALBANY, NEW YORK) - A new poll by Unions representing Workers across New York shows that an overwhelming majority of New York voters (92%) support new taxes on the ultra-wealthy as the state grapples with a $6.1 billion budget deficit.

The survey of 1,000 registered New York voters conducted by Hart Research Associates shows broad support for a Wealth Tax on New Yorkers with more than $1 billion in wealth, a new Ultra-Millionaires Tax on those with incomes over $5 million and a pied-à-terre tax.

That support cuts across all regions of the state and party lines, with 95% of Democrats, 87% of Republicans and 89% of unaffiliated voters backing the tax proposals.

What’s more, 64% of voters say that implementing these new taxes on the super-rich would have a good impact on New York’s economy and that 72% say they are more likely to vote for a candidate who favors passing new taxes on ultra-millionaires.

A polling memo with full results can be found here.

The Labor Unions say that at a time when income inequality is at an all-time high, the poll shows New Yorkers believe that making billionaires and ultra-millionaires pay their fair share in taxes is the right way to make significant investments in critical state services, such as education, higher education, health care, public housing and transportation.

With 112 New York billionaires sitting on $525 billion in wealth and more than 46,000 multi-millionaires calling the Empire State home, the Unions say that mandating that the ultra-wealthy pay their fair share in taxes would generate more than $12 billion in revenue for the state.

“It’s hard to walk down some Manhattan blocks without bumping into a multi-millionaire,” New York State United Teachers (NYSUT) President Andy Pallotta said. “So while some say it may be hard to consider tax proposals in an election year, we say that it’s hard for our schools to go without the Social Workers, classroom technology and supplies they need because the state wouldn’t ask the ultra-wealthy to pay their fair share.”

“Albany cannot balance its budget by shifting its costs onto the backs of our children, sick, elderly and struggling families,” United Federation of Teachers (UFT) President Michael Mulgrew said. “Not in New York City, nor anywhere else.  We know there are better solutions to deal with the deficit - millionaires and billionaires shouldering more of their fair share.”

“It’s clear the people of our state, Union Men and Women, and students across New York are all on the same page that there needs to be a comprehensive approach on the budget,” United University Professions (UUP) President Fred Kowal said. “To ensure quality health care, public education and public services, tax revenue must be strategically generated from those who can most afford it.  All New Yorkers need to pay their fair share for New York to make real progress.”

“We call on the Legislature to make sure that full funding for CUNY’s (City University of New York) essential needs is a priority in your conference and that the leaders of each house take a stand in favor of the new revenue that will be needed to achieve it,” Professional Staff Congress (PSC) President Barbara Bowen said. “Refuse to pass a budget unless it includes new revenue from progressive taxation and covers CUNY’s basic operating costs — without raising tuition.”

“Albany cannot just cut its way out of this budget crisis,” Communications Workers of American District One Assistant to the Vice President Bob Master said. “Given the staggering levels of income and wealth inequality in New York State, the only fair solution to the budget shortfall is to require the most fortunate among us to contribute a little more in taxes so that vital public services like education, health care and housing can be protected.”

“New York State has the responsibility of ensuring that vital services and programs across the state - education, health care, housing, transportation - continue to be funded at needed levels for New Yorkers,” said Stuart Appelbaum, President of the Retail, Wholesale and Department Store Union (RWDSU). “Taxing ultra-millionaires and the pied-à-terre tax to raise the necessary revenues are not only supported by a majority of New Yorkers, they are the right thing to do. Now is the time for the state to adopt tax policies that support and revitalize communities.  We can’t afford not to.”

“As Nurses, we see the compelling necessity of every Medicaid dollar, with more than a quarter of New York’s population (26%) covered by Medicaid and Children’s Health Plus,” New York State Nurses Association (NYSNA) Executive Director Pat Kane said. “To ensure that our hospitals, community health centers, physicians, nursing homes and jobs in the Health Care Sector all receive the Medicaid funding they need, it is critical that we generate the revenue that makes that funding possible in the first place.  To ensure a healthy future for New York, billionaires and ultra-millionaires must pay their fair share toward public services like health care.”

“As the state looks to close its budget deficit, it would be irresponsible for legislators to not consider new revenue streams,” said Henry A. Garrido, Executive Director of American Federation of State, County & Municipal Employees (AFSCME) District Council 37. “We must reject the notion that cuts to programs and services for vulnerable New Yorkers across the state are needed to fill the gap year after year; and instead, tell the ultra-wealthy it’s their turn to pay their fair share.”

“After a decade of austerity under the two percent state spending cap, it is long past time to address glaring and pressing unmet funding needs throughout the state,” said Ron Deutsch, Executive Director of the Fiscal Policy Institute.

“The way to do this is to ask the wealthiest among us to pay a little more in taxes so that we can raise the revenue needed to invest in education, housing, human services and other public services.  The public, regardless of political affiliation, overwhelmingly agrees that we should ask our state’s billionaires and multimillionaires to pay their fair share in taxes,” he said.

For More On This Labor News Story, Go To: www.nysut.org/news/2020/february/survey-says-tax-the-ultrawealthy-to-boost-revenue