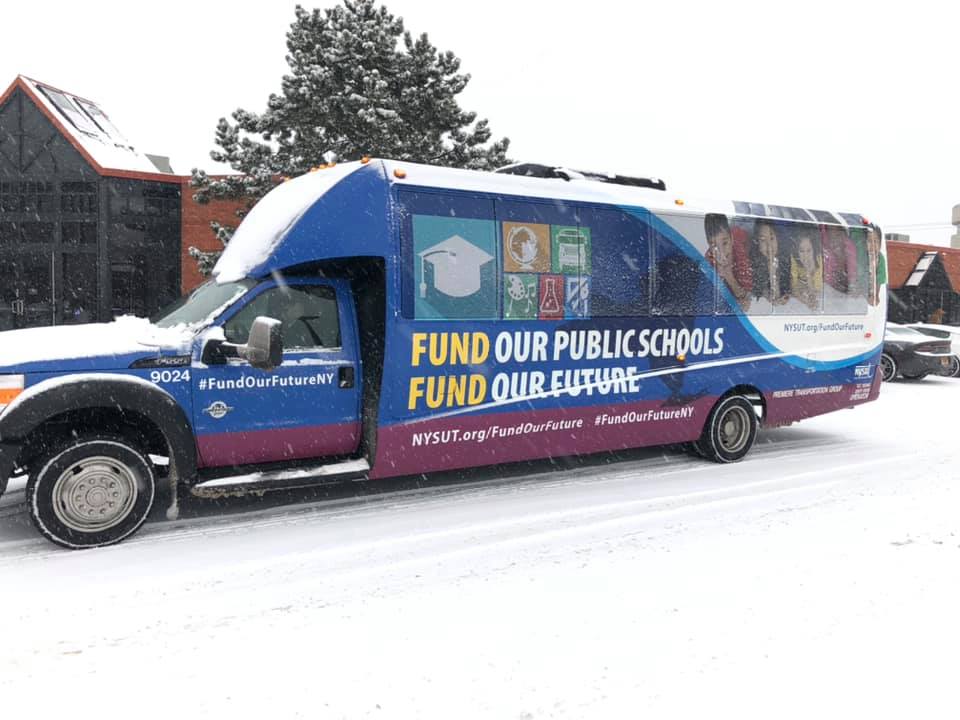 Pallotta also advocated for new taxes on billionaires and ultra-millionaires that would generate billions of dollars in new revenue for essential state services.

“Our children ‘do not get a do-over,’” Pallotta (pictured below) said. “We ‘hear every year that there is a budget gap, but the state can’t close it on the backs of Western New York’s Middle Class families and students through more underfunding of our education system.’  ‘Fully funding our students’ futures can’t wait any longer.’” 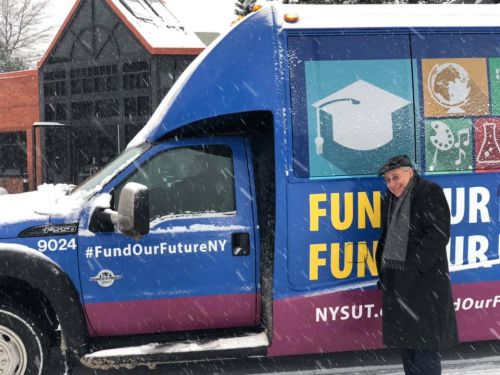 During stops at Niagara Falls High School and Niagara Street School, Educators and administrators noted that the Niagara Falls City School District is owed $13.7 million in Foundation Aid.  Due to underfunding, the district can offer only one Social Worker for every 2,000 students and only eight Guidance Counselors districtwide.  At the same time, the district is not able to offer a Librarian at any of its elementary schools.

“The Niagara Falls City School District is a ‘very poor, small’ city school district ‘that remains in litigation with the state of New York since 2011 over the state’s failure to follow its own funding formula,’ which would entitle the district to nearly ($20 million) ‘more’ in Foundation Aid yearly,” Niagara Falls Superintendent Mark Laurrie (pictured below) said. “As a result, we have ratios at Niagara Falls High School of ‘(2,000) students to one’ Social Worker, ‘no’ Library Media Specialists in elementary schools and a school counselor to student ratio ‘of over (300) to one.’ Even after taking the steps to ‘right-size’ our buildings, ‘renegotiate’ health benefits with our Union Partners ‘and to consolidate many functions, we fight a budget gap over ($4 million) every year.’  ‘This is not equitable and far from a sound, basic education for our neediest students.’” 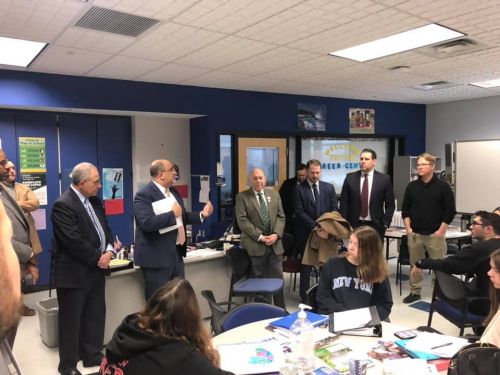 Later in the day, the Fund Our Future bus traveled to school districts in the Buffalo Suburbs of Williamsville and Kenmore-Tonawanda.

Williamsville is owed $12.6 million in Foundation Aid.  The needs of an increasing number of English Language Learners are among the pressing issues that school officials say they need to address through additional state funding.

“Our ‘goal is to provide the proper resources to our schools, so our administrators, Teachers and students are prepared and can succeed at the highest level,’” Williamsville Superintendent Scott Martzloff said.

Meanwhile, the Kenmore-Tonawanda School District is owed nearly $9 million in Foundation Aid.  Educators there say the district is in desperate need of Staff who can provide support in reading and math and to bolster remedial programs.  That’s to say nothing of the fact the district has had to cut Sixth Grade Exploratory Language Classes and Technology Training for younger students due to underfunding.

“The ‘combination’ of Foundation Aid ‘not being full funded along with the state tax cap continues to put a severe strain on our district’s ability to raise revenue,’” Kenmore-Tonawanda Superintendent Stephen Bovino said. “While our community ‘wholeheartedly supports’ the school district, ‘we cannot place any further burden on our taxpayers.’”

State lawmakers are joining with NYSUT in drawing attention to the serious needs schools are facing.

“Many students ‘depend on the state for their education, and it’s our responsibility to ensure that education is funded,’” New York State Assemblyman Sean Ryan of Buffalo said. “Foundation Aid ‘is vitally important to our students and I pledge to make sure the equitable distribution of Foundation Aid is a top priority this legislative session.’  Our students ‘deserve to have access to the services they need to be successful and this funding will allow districts to provide programs that will benefit all students.’”

“Here in Williamsville, our schools ‘are some of the best’ in Western New York, but the Williamsville School District is owed more than ($12 million) in Foundation Aid and, every year, ‘our schools are expected to do more with less,’” New York State Assemblywoman Karen McMahon said. “Education ‘is an investment in the future and I call upon the governor to fully fund all school districts across the state.’”

As the state budget takes shape, NYSUT’s Fund Our Future Bus Tour – which already has made stops in the Capital Region, Rochester, the Southern Tier, Westchester County, Long Island and New York City - will continue visiting districts throughout the state well into February.

NYSUT, as a member of the New York State Educational Conference Board, is calling for a $2.1 billion increase in state aid in the 2020-21 State Budget, which includes the first installment of a three-year phase-in of the more than $3.4 billion in Foundation Aid owed to more than 400 school districts around New York.

In order to generate the revenue needed to fully fund Foundation Aid, in addition to other state services like health care, housing and transportation, NYSUT is supportive of new taxes on billionaires and ultra-millionaires.

NYSUT - which represents more than 600,000 Members in Education, Human Services and Health Care, is affiliated with the American Federation of Teachers (AFT), the National Education Association (NEA) and the AFL-CIO.

For More On This Labor News Story, Read: FUND OUR FUTURE: Western New York Schools Agree: We Need The Funds We Are Owed At https://www.nysut.org/news/2020/february/fund-our-future-western-ny

You Can Also Learn More About NYSUT’s Fund Our Future Campaign At nysut.org/FundOurFuture.