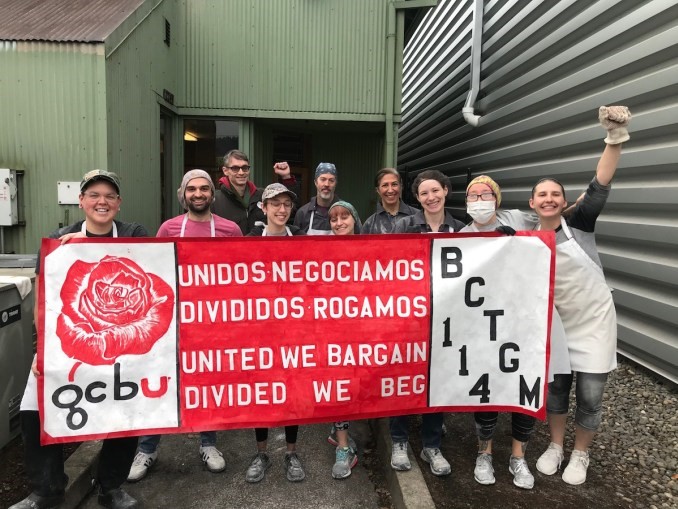 (PORTLAND, OREGON) - Workers who make bread for Grand Central Bakery in Portland have voted to Unionize in an election held by the National Labor Relations Board (NLRB).

The 29-to-9 vote affirmed what the Workers had told management three weeks earlier: Bakery, Confectionery, Tobacco, and Grain Millers (BCTGM) Local 114 has the support of a majority of the Workers at the company’s wholesale bakery at 2249 NW York Street.

For now, just the 44 Bakers and Dishwashers at that location will be Union-Represented.

The company’s 12 retail locations, its NE Fremont Pastry Bakery, and its Seattle Wholesale Bakery, remain Non-Union, but supporters of the new-born Union at the Portland Wholesale Bakery have given Workers at all other locations an open invitation to join the union effort.

Grand Central employs about 460 Workers in all.

In the weeks before the Union Election, a company-wide memo told all employees not to talk to the press.

It even directed them to ask TV camera crews to leave the property - if any showed up.

The company did not respond to messages from The Northwest Labor Press.

However, a spokesperson for the Union Committee explained some of why Workers wanted a union: Wages of $16.43 to $21.42 an hour are far lower than Union-represented Bakers at Franz and Bimbo/Oroweat, who make over $25 an hour; Opportunities for advancement and raises are limited; They say complaints of sexual harassment have been poorly handled by management; and that Workers have no say over changes that affect them.

Safety is also a big concern, said the Grand Central Worker, who asked not to be named.

Workers use buckets to scoop a pre-ferment called poolish out of 500-pound mixing bowls, which that can lead to injuries.

The Union Campaign launched at the busiest time of the year for the company – just before the Christmas Holiday Season - and yet for four days, Grand Central Bakery managers pulled Workers off the floor half a crew at a time for special meetings to try to talk them out of Unionizing.

“If you become this Union, we are not able to deal with you directly regarding your wages, hours, employment,” CEO Claire Randall said at a December 6th Employee meeting, according to a word-for-word transcript of the meeting produced by one of the Workers present.

Note to Randall: That’s kind of the point of Unionizing, isn’t it?

As the slogan Workers picked for their campaign lays it out: “United We Bargain, Divided We Beg.”

Top Read This Labor News Story In Its Entirety, Go To: https://nwlaborpress.org/2019/12/grand-central-baking-workers-join-union/