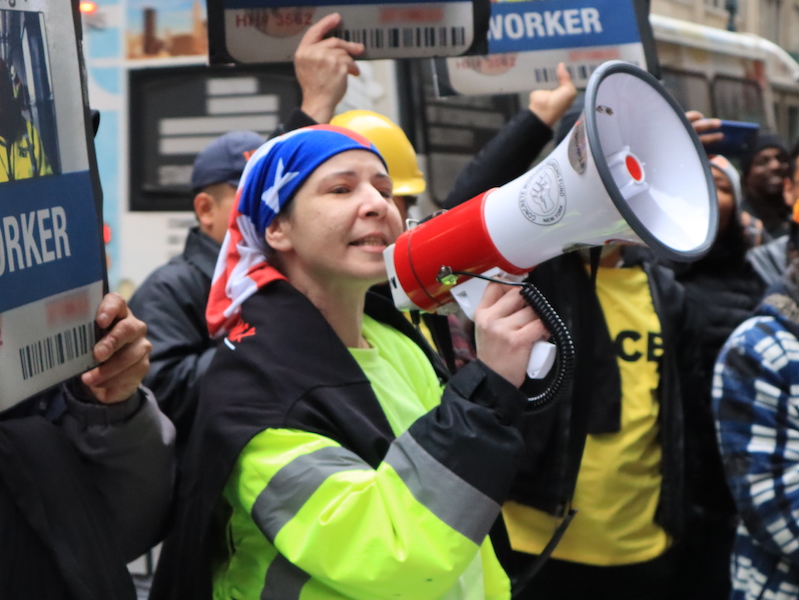 (NEW YORK CITY) - A diverse group of Union and Non-Union Workers protesting more than $70,000 in alleged wage theft rallied outside the New York Construction Alliance’s [NYCA] HQ in Manhattan on Wednesday (February 5th) in an ongoing protest against New Line Structures’ business practices, as well as the recent deaths of two subcontractors on Long Island.

Joe Scopo, the Head Organizer of District Council 16 of the Cement and Concrete Workers Union, led the group of 400 protestors on Lexington Avenue as they held up pictures of the subcontractors while Workers chanted: “Stand Up, Fight Back!”

“Construction Workers ‘are human beings whether they are Non-Union or not,’” Scopo said. “Nearly ninety-percent of construction deaths ‘are in the Open Shop Sector - that should tell you that the open shop model does not work.’”

Scopo later held a moment of silence for two Long Island subcontractors who died in a trench collapse last week.  After the silent reflection, he and the crowd chanted: “How Many More Must Die!”

“The movements in New York City ‘are what keeps the fight going,’” Scopo said. “Your ‘future is at stake.’  ‘We are in a good place right now, but don’t let anybody tell you that the Unions aren’t in a good place.’  We ‘just want to secure a good future, so what they are doing in the Non-Union Sector doesn’t come to us.’  ‘We can’t allow them to hurt Workers.’”

Intro 1447 was the Bill sponsored by then City Council Member Williams in 2017 that required enhanced training and qualifications for Workers to engage in construction and building demolitions.

“What I want to see happen is that they ‘get kicked off these boards, they get no more work from the city and the state and that somebody goes to jail for some time,’” Williams said.

To Read This Labor News Story In Its Entirety, Go To: http://laborpress.org/stand-up-fight-back-construction-workers-jeer-new-york-construction-alliances-record-on-wage-theft-and-safety/