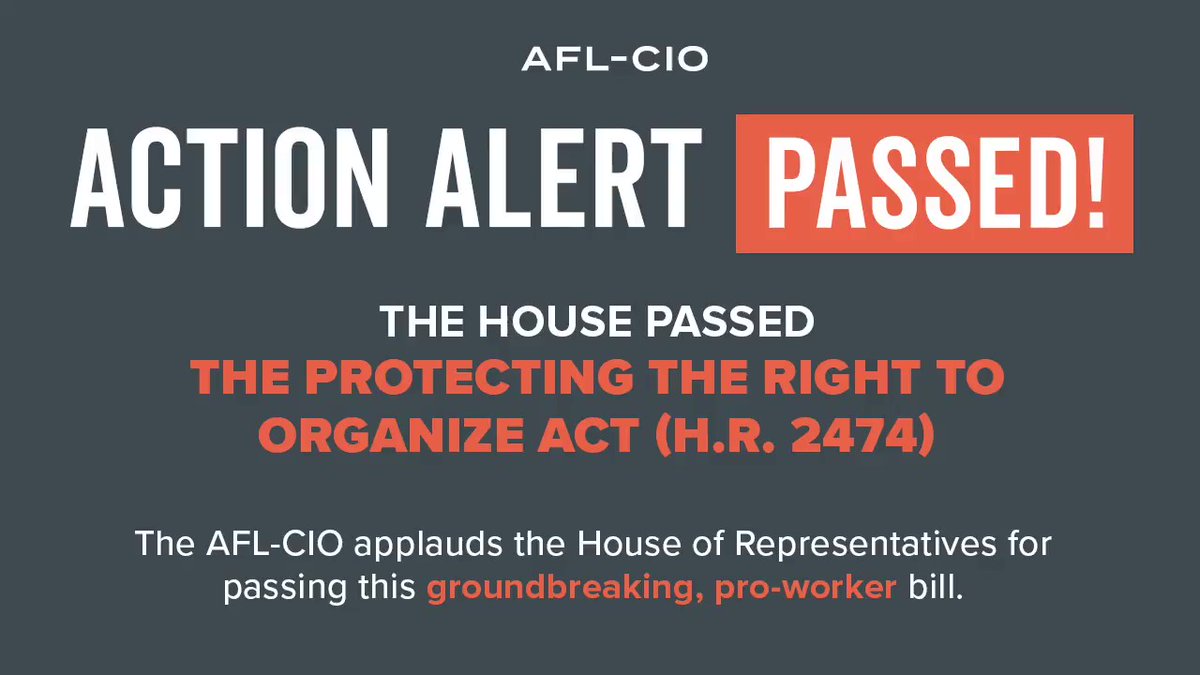 The Protecting the Right to Organize (PRO) Act was endorsed by most of the top Democratic Presidential Candidates.  Although its co-sponsors also include three House Republicans, the Bill is unlikely to clear the Republican-controlled Senate.

A day earlier, National AFL-CIO President Richard Trumka delivered the following message at a news conference held in Washington with supporters of the PRO Act: Now is the time - in fact, its way past time - to protect the right to organize for Workers in the 21st century.  The PRO Act is how we do it.  It is not an exaggeration to say this is the most significant piece of legislation that will come before the House this year.  It protects the right to Strike.  It trumps the “Right-To-Work” sham.  It ensures a process for reaching a first contract once a Union is recognized, provides substantial relief for Workers whose rights have been violated and creates a true deterrent, so employers think twice before violating the law.  It also removes the employer’s standing in representation cases.  So we call on the House to pass the PRO Act.  We call on all members of Congress - Republican and Democrat - to support it.  We call on the Senate to follow suit.  And we call on President Trump to sign this bill into law.  And to those who would oppose, delay or derail this legislation - do not ask the Labor Movement for a dollar or a door knock.  We won’t be coming.

Introduced in May by U.S. Representative Bobby Scott (Democrat-Virginia), who serves as the Chairman of the House Committee on Education and Labor, the PRO Act languished for months as moderate Democrats expressed misgivings that the Bill was anti-business.

The Bill would make it easier for Workers to: Certify Unions; Change how employers classify Workers; Prevent Workers from being denied rights because of Immigration Status; Eliminate State Right-To-Work (for less) Laws; and Block Laws that protect Employees from not paying Union Dues, among other measures.

The U.S. Chamber of Commerce lobbied heavily against it, deriding it as "a litany of almost every failed idea from the past thirty years of labor policy."

The logjam broke last month after 72 Democrats wrote House Speaker Nancy Pelosi to demand that the Bill be brought to the floor.

Supporters of the bill say it would put Workers on more equal footing with employers, raising wages and improving working conditions nationwide.

Democrats also hope to drive a wedge between Republican President Donald Trump, who opposes the Bill, and White Working Class Voters after the President's recent legislative victory passing the U.S. Mexico-Canada agreement.  That agreement is expected to create jobs in the Midwest-based Auto Industry.

But businesses and many Republicans regard the Bill as a declaration of war.

In the weeks leading up to the vote, business groups sought to peel off vulnerable Democrats and to stop additional Republicans from signing on.

The White House said this week the legislation would “take the country in precisely the opposite direction from the president’s successful deregulatory agenda, which has produced rising Blue-Collar wages and record low unemployment.”