NYSUT Brings Its Fund Our Future Bus Tour To Western New York  Visits Teachers & Elected Officials In Niagara Falls, Williamsville & Kenmore-Tonawanda In Order to Draw Attention To The Severe Impact And Lack Of State Funding Has Had On Schools 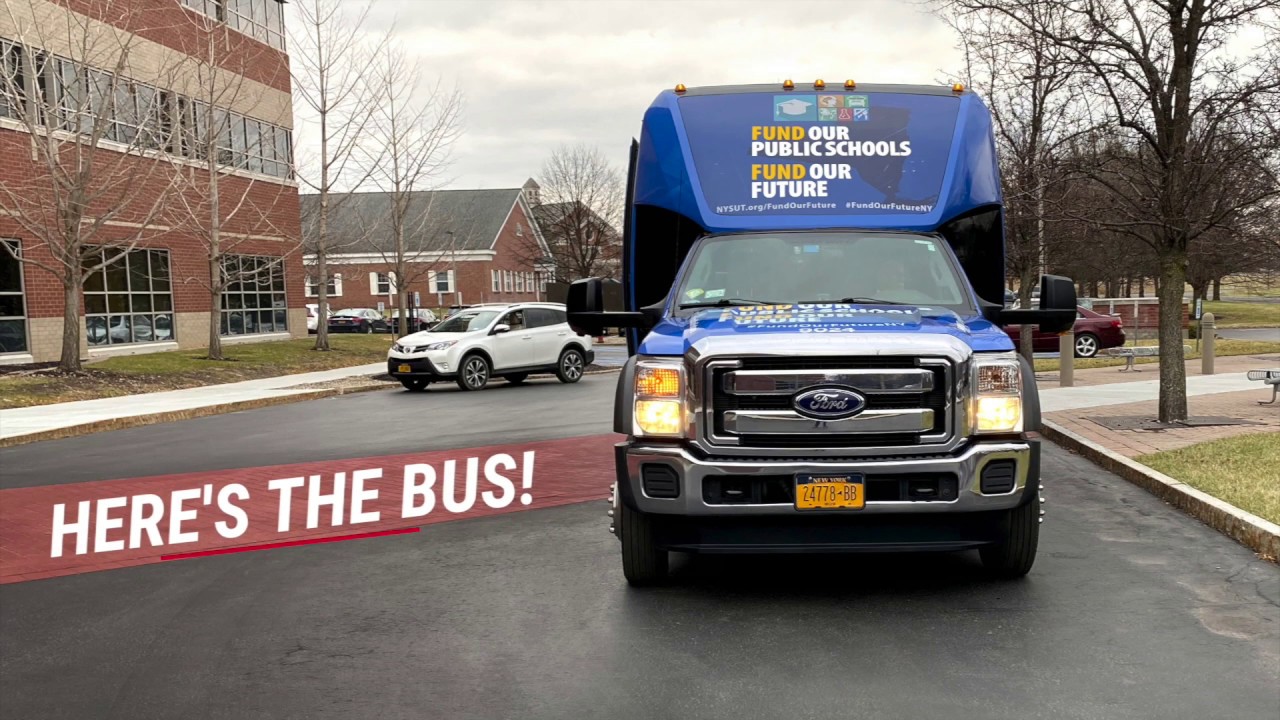 The goal is to draw attention to the severe impact a lack of New York State Funding has had on schools statewide.

Union Activists will also highlight the need for new revenues that will enable the state to tackle Educational Inequality and other pressing needs.

NYSUT President Andy Pallotta and other NYSUT Officials will first travel to Niagara Falls to join local Union Leaders, Superintendent Mark Laurrie, fellow Educators and elected officials for a tour of Niagara Falls High School to hear first-hand about the issues caused by underfunding that Niagara Falls schools are facing.

They will then travel to Niagara Street School for a tour.

Niagara Falls is owed $13.7 million in State Foundation Aid Funding.  Educators and administrators say that due to underfunding, the district can offer only one Social Worker for every 2,000 students and only eight Guidance Counselors district-wide.

At the same time, the district is not able to offer a Librarian at any of its elementary schools.

The Fund Our Future bus will then travel to Williamsville for two stops.

NYSUT officials will join Local Union Leaders, Superintendent Scott Martzloff, Educators and elected officials for a roundtable discussion at South High School.  That will be followed by a tour of Country Parkway Elementary in Buffalo.

Williamsville is owed $12.6 million in Foundation Aid.  The needs of an increasing English language learner population and the mental health needs of students are among the pressing issues that school officials say they need to address through additional state funding.

The bus tour will round out the day in Tonawanda, with tours of two Kenmore-Tonawanda buildings, starting at Holmes Elementary School.  The bus will then travel to the Ken-Ton Closet in Tonawanda) for a roundtable discussion on the district’s needs featuring Superintendent Steve Bovino, Union Leaders and other district officials.

Kenmore-Tonawanda is owed nearly $9 million in Foundation Aid.  Educators say the district is in desperate need of Staff who can provide support in reading and math and to bolster remedial programs.  That’s to say nothing of the fact the district has had to cut Sixth Grade Exploratory Language Classes and Technology Training for younger students due to underfunding.

As the state budget takes shape, NYSUT’s Fund Our Future Bus Tour is visiting school districts around New York that, like Niagara Falls, Williamsville and Kenmore-Tonawanda, have been underfunded by the state.

NYSUT, as a member of the New York State Educational Conference Board, is calling for a $2.1 billion increase in State Aid in the 2020-21 State Budget, which includes the first installment of a three-year phase-in of the more than $3.4 billion in Foundation Aid owed to more than 400 school districts around New York.

In order to generate the revenue needed to fully fund Foundation Aid, in addition to other state services like health care, housing and transportation, NYSUT is supportive of new taxes on billionaires and ultra-millionaires.

To Directly Access This Labor News Story, Go To: www.nysut.org/news/2020/february/media-release-fund-our-future-western-ny

And To Learn More About NYSUT’s Fund Our Future Campaign, Go To: FundOurFutureNY.org.