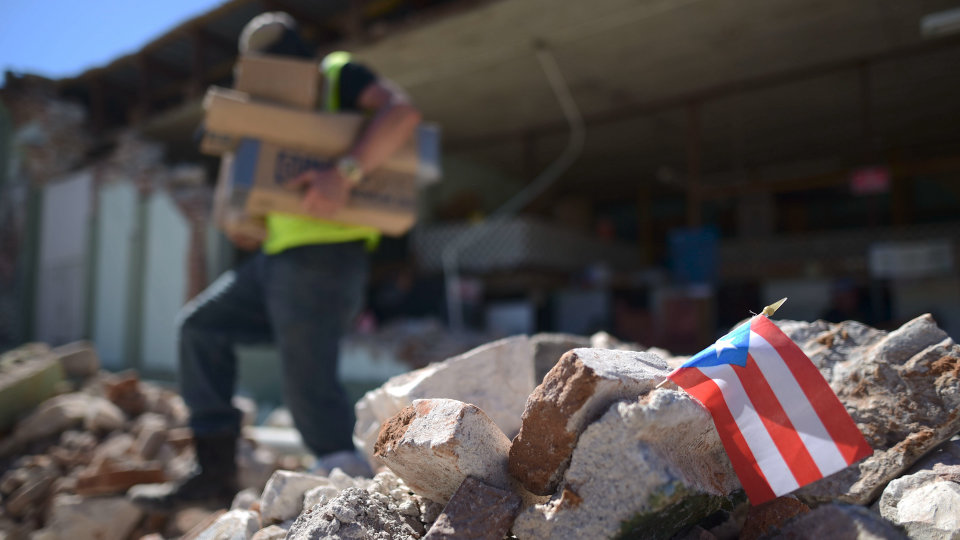 (PUERTO RICO) - Teacher Maria Velez saved money for decades to be able to buy a house. Six months ago, she accomplished that dream and moved into a new home with her son and daughter, but on January 7th, an earthquake destroyed her house and all her family’s new belongings.

Velez managed to rescue her children and the family dog.

The next day, her son received orders to deploy to Iraq.

Meanwhile, earthquakes continued to rumble on the island, crushing many more homes, businesses and schools.

Like many others, Velez is sleeping in a tent near her former house.

Union Leaders, Staff and volunteers are on the ground helping Velez and other colleagues from the Asociación de Maestros de Puerto Rico (AMPR), the Teachers Union.

They are meeting regularly with school and government officials to determine the next steps.

The American Federation of Teachers (AFT) is shipping large tents to the island and AFT estimates that up to 20% of Puerto Rico’s 856 schools have been rendered structurally unsound due to the earthquakes.

“We spoke with AFT Members - Teachers - who want to return to their jobs of teaching and caring for children but have no idea if they’ll have a school to go back to this year,” said AFT President Randi Weingarten, who visited the island.

The New York State United Teachers (NYSUT) Union and its Members are supporting residents with supplies and with donations to the NYSUT Disaster Relief Fund.

The AFL-CIO has pledged to buy desks, chairs and easels.

“The ‘continued generosity’ of NYSUT Members for the educators and students of Puerto Rico ‘is reflected in the more than ($11,500) that has been donated to the NYSUT Disaster Relief Fund since the first earthquake struck the U.S. Territory on (January 7th),’” NYSUT Secretary-Treasurer Philippe Abraham said.

“In addition to direct outreach, NYSUT and its Members have donated more than ($40,000) to assist the AFT's Puerto Rico relief efforts,” he added.

Union Responders are also making “Go Bag” backpacks for Teachers with emergency First Aid kits, water, flashlights, and folders of students’ names in case an earthquake affects another school and they all have to bolt.

“Children ‘need to be in school.’  ‘We want some normalcy and the opening of the schools would help with that,’” said Evelyn DeJesus during her second trip to the island in a month.

A native of Puerto Rico, DeJesus is Executive Vice President of the AFT, a NYSUT Board Member and United Federation of Teachers (UFT) Vice President.

Union Volunteers and Staff have been walking through neighborhoods to hand out forms to people who need help.

A committee meets each week and uses the forms to determine the amount of each stipend to be awarded by using a rubric based on family size and damage to the home, explained Adriana O’Hagan, an assistant to DeJesus.

To Continue Reading This Labor News Report, Go To: www.nysut.org/news/2020/february/union-steps-up-to-help-members-in-puerto-rico