Union Advocates Fighting For Latino Construction Workers In Brooklyn, Who Say They Are Owed More Than $89,000 In Unpaid Wages 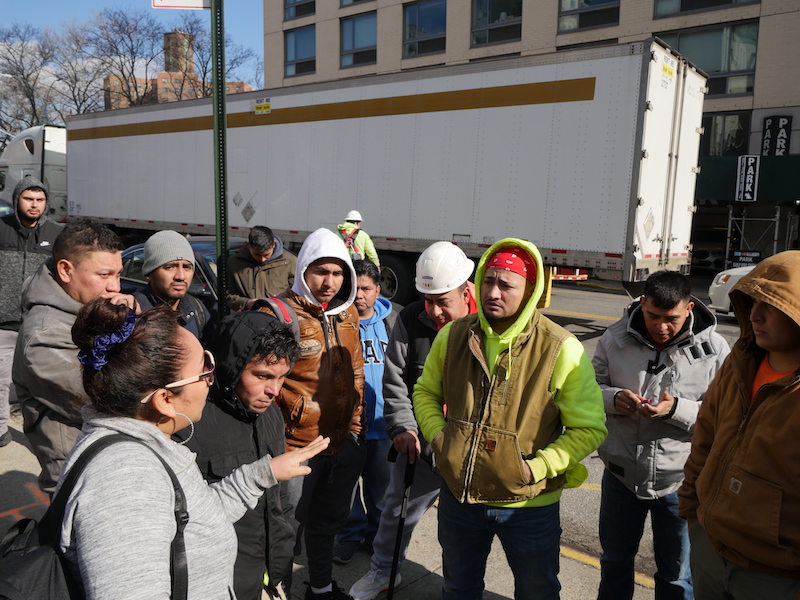 (BROOKLYN, NEW YORK) - The builders of new residential development going up in Downtown Brooklyn owe a group of more than 40 Latino Construction Workers in excess of $89,000 for three weeks of unpaid wages, according to Union Advocates fighting on their behalf.

Members of the New York Community Alliance for Worker Justice visited the 260 Gold Street job site earlier this week, hoping representatives from Neiva Construction Corporation would finally make good on restitution - but after standing around all morning near the corner of Concord and Gold streets, the Workers learned that they would have to come back Thursday (February 6th) to get paid.

“If it doesn’t’ happen by Thursday, we’ll go to the District Attorney’s Office on Friday morning,” NY Community Alliance for Worker Justice Organizer Eddie Jorge said. “It ‘sucks that we have to wait another week, but my end goal is to get them paid.’”

Some of the Workers said they were also stiffed working another Nieva job site on Fulton Street.

“It’s the ‘same shit every day - no pay,’” one of the construction workers told LaborPress on Monday (February 3rd).

The Latino Workers began working on the Gold Street site the first week of January and they say they were always paid in cash.

According to the New York Community Alliance for Worker Justice, Neiva hired them as “Independent Contractors” without the benefit of any insurance or Workman’s Compensation.

“Imagine, this is just ‘one ‘crew,” Jorge said. “There are ‘hundreds of guys this is happening to weekly.’”

Fed up Trade Unionists say contractors are exploiting Immigrant Workers and that there are many more Workers being ripped off - but are afraid to come forward.

The NY Community Alliance for Worker Justice has also been advocating for another group of unpaid Latino Workers on a Nieva job site at 181st Street and Amsterdam Avenue in Manhattan.

After much effort, that group has reportedly recovered their lost wages.

Downtown Brooklyn is undergoing a residential and commercial building boom.

The cost of apartments at the tony Brooklyn Point building on Willoughby Street, for instance, started at $837,000 when they first went on the market three years ago.

“It’s ‘personal when these guys reach out to us,’” Jorge said. “We ‘understand what they’re going through.’”

To Directly Access This Labor News Story, Go To: http://laborpress.org/latino-construction-workers-owed-more-than-89k-in-unpaid-wages/