Labor Perspective From Mackinac Center for Public Policys Jarrett Skorup: Public Sector Right-To-Work (For Less) May Be A Reason Why Union Density Has Declined 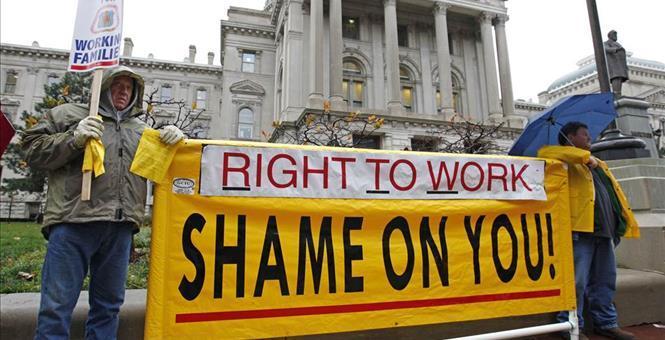 The Hill Editor’s Note: Jarrett Skorup is Director of Marketing and Communications at the Mackinac Center for Public Policy, a Research and Educational Institute headquartered in Midland, Michigan.  You can follow him on Twitter @JarrettSkorup.  The views expressed by contributors are their own and not the view of The Hill.

Another year, another decline in Union Membership in the United States.

While Private Sector Unions long have been shrinking, Public Sector Unionization rates now also are on a downward trend.

In its annual Union Survey, the Bureau of Labor Statistics (BLS) found a decline of 0.2 percentage points in the overall Unionization Rate of the workforce, from 10.5% to 10.3%.

The Unionization Rate in the Private Sector is just 6.2%, down from nearly 17% in the early 80s.

That’s the lowest rate ever recorded.

Until recently, the national rate of Unionization had been buoyed somewhat by their gains among State and Local Workers.

The Public Sector Unionization Rate was steady for 40 years, with just shy of 40% of Government Workers Unionized, but that rate began to decline in 2011, fueled perhaps by the passage of Right-To-Work (for less) Laws in the states of Michigan, Wisconsin, Indiana, Kentucky and West Virginia.

Then, membership in Government Employee Unions dropped - reaching 33.6% in 2019.

In 2018, the U.S. Supreme Court’s Janus decision affirmed the First Amendment rights of all Public Employees.  Teachers, Police Officers, Firefighters, State Employees, Local Government Workers and everyone else who draws a government paycheck now cannot be required to pay dues or fees, and have the ability to fully leave a Union.

In short, the decision extended Right-To-Work to all Public Sector Workers.

The change in Unionization Rates in the largest, most heavily Unionized states has been mixed over the past decade, with some increasing and some decreasing.

While Unions oppose policies allowing Workers to leave, the usual complaints about negative effects from Right-To-Work Laws do not appear in the government data, but a long-term look at the evidence shows that Right-To-Work States are gaining the most in total jobs, household income and population.

The legislative fight over Right-To-Work is not necessarily related to public policy or economic outcomes.

Unions are a key source of support for the Democratic Party and they can help Democrats more if Workers are forced to financially support them.

The single largest grant from one of the Nation’s largest Unions - the American Federation of Teachers (AFT) - went to a Democratic Party Super PAC.

Given the partisan realities of Unions’ political activities, some politicians always will support Right-To-Work Laws and others always will oppose them.

To Continue Reading This Labor News Report, Go To: https://thehill.com/opinion/finance/480481-unions-decline-again-and-public-sector-right-to-work-may-be-a-reason?fbclid=IwAR28dUyUZV7FMLiUbRJa-qvlLozEUD-jj_JZ-hPZ_b1HLHIXhJFB1HNVecg