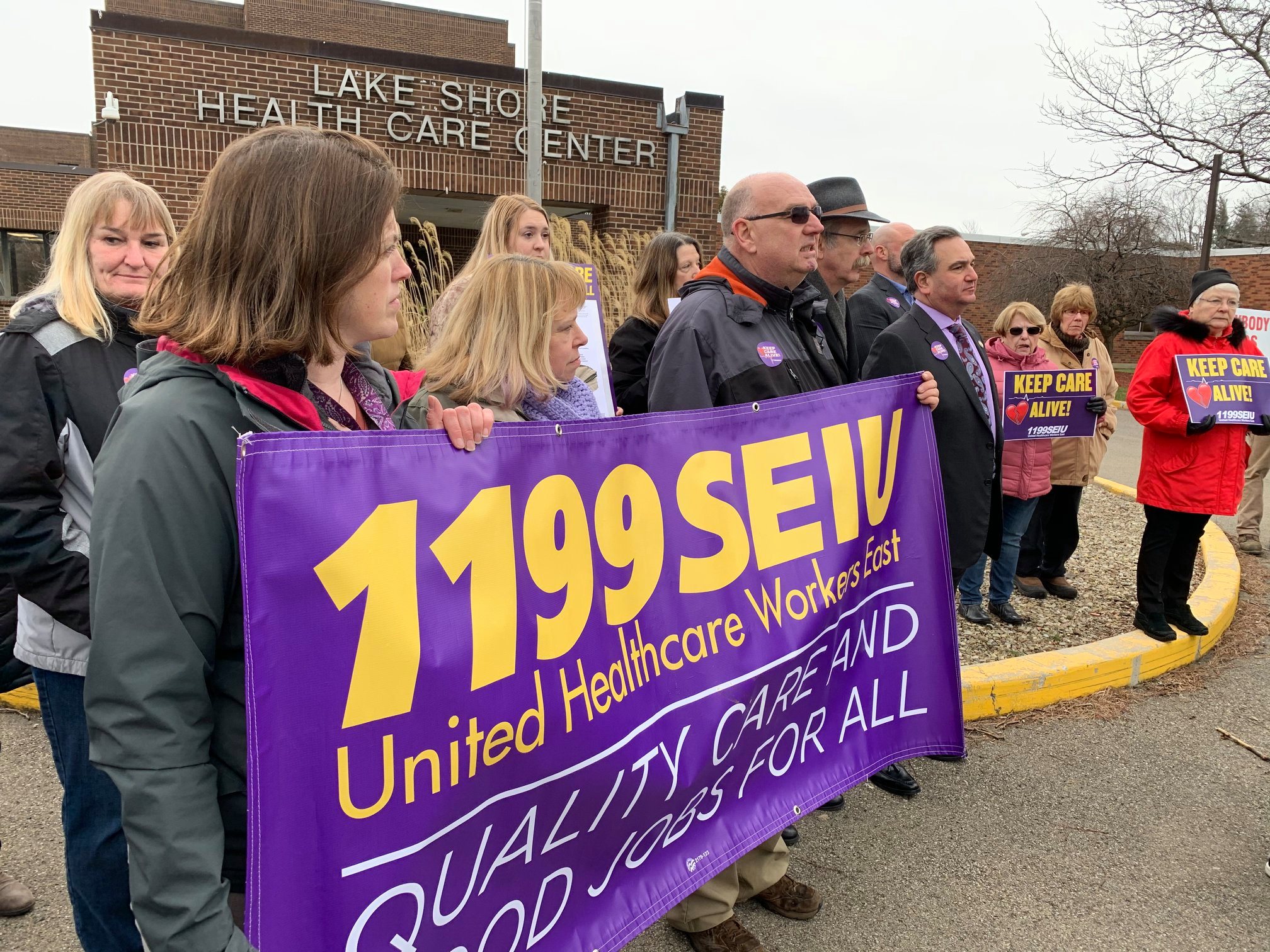 (IRVING, NEW YORK) – 1199 Service Employees International Union (SEIU) is criticizing the closing of Lakeshore Hospital’s Emergency Room as those in this Chautauqua County Community rallied outside the Medical Facility to blast the Hospital Administration’s “devastating” decision that will negatively impact area residents.

“We’re ‘extremely disappointed’ with TLC Lakeshore’s ‘decision to ignore’ the Behavioral Health Services Advisory Council’s recommendation ‘by expediting the closure of a needed’ emergency department and behavioral health unit.  As Health Care Workers ‘who care so deeply for our patients, it is heartbreaking to think about the devastating impact this closure will have.’  It is a ‘terrible way to treat this community,’” 1199 SEIU Administrative Organizer Cheryl Marino said.

“We call on the Brooks Hospital/TLC Board of Directors, Chairman Chris Lanski, CEO Mary LaRowe and Kaledia Health Management ‘to sit down with the community to talk about how these critical gaps in health care services will be filled.’  ‘We also urge TLC/Lakeshore Management to return to the bargaining table to discuss how they plan to help the Health Care Workers who are now faced with losing their livelihoods.’  In the coming weeks we will ‘continue to speak out against this rushed and irresponsible closure and work towards meeting the behavioral health needs of our community,’” Marino said.

The closure was first announced in early December by the Brooks-TLC System.

While the state Health Department approved the plan, the New York State Office of Mental Health has not.

In addition, the state has been subsidizing both Lakeshore Memorial Hospital and Dunkirk’s Brooks Hospital to the tune of more than $25 million since 2016.

Union Members at the rally also confirmed that patients were removed from the hospital’s Behavioral Health Unit and said many items were being thrown in dumpsters behind the building.

According to a news story in The Dunkirk Observer, it was announced that the Lakeshore Hospital Emergency Room was closed Sunday (February 2nd) at 7 p.m.

The Brooks-TLC Hospital System sent the notice right as the afternoon rally to support the emergency department and the behavioral health clinic began on Friday (January 31st).

It was one more action taken by the administration that ignores an edict from the Office of Mental Health’s Behavioral Health Services Advisory Council that just admonished hospital management for their lack of planning and execution in announcing the closing in early December.

Despite calls by Union Officials, elected representatives, community members and emergency responders to “do the right thing,” Brooks-TLC did exactly what they were not supposed to do.

To Continue Reading This Labor News Story, Go To: www.observertoday.com/news/page-one/2020/01/live-coverage-rally-at-lakeshore-starts-at-1-p-m/?fbclid=IwAR3CT4bE3dZp1eJUDbeHEXmUx7m-lS5WUsqhPPQiU9Jk7wEHo4yNeaHLnn0