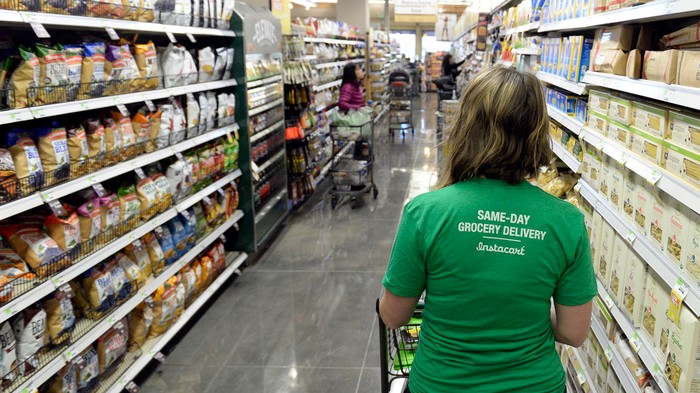 (SKOKIE, ILLINOIS) - A group of Instacart Employees in the Chicago suburb Skokie have voted to Unionize with United Food & Commercial Workers (UFCW) Local 1546 - a historic win for the grocery delivery platform.

The vote was 10-to-4 in favor of the Union, according to Workers.

"The overwhelming majority of the Employees made history by becoming the first Instacart Employees to win a certified Union Election in the United States," UFCW Local 1546 wrote in a press statement.

The Union victory sends a message to other Gig Workers around the country who are fed up with working conditions at Silicon Valley Tech Companies like Instacart - which has faced months of backlash in the form of Worker-led strikes, protests and on-line boycotts.

In the days leading up to the election, Instacart enlisted high-level managers to visit the Mariano’s grocery store where the Unionizing Workers pick and pack groceries for delivery.

The managers distributed Anti-Union literature warning Employees that a Union would drain paychecks and “exercise a great deal of control” over Workers.

“I encourage you to look at all of the FACTS and vote “NO” on February 1st,” a senior operations manager for Instacart wrote in one of the memos obtained by Motherboard, dated January 22nd.

"The Workers remained united throughout the Organizing Campaign despite being subjected to their company's Anti-Union stance," UFCW Local 1546 President Bob O'Toole said in a press statement. "We look forward to this opportunity to work with our new Instacart Members in negotiating their first Union Contract."

While Independent Contractors who ferry groceries to customers make up the majority of Instacart’s 142,000 national “Shopper” Workforce, roughly 12,000 of those Workers are Instacart Employees, known as In-Store “Shoppers,” who pack groceries in select grocery stores.

These In-Store Workers are capped at 30 hours a week and are legally classified as Employees - making them eligible to Unionize - unlike the rest of Instacart’s workforce.

“Instacart cares deeply about all Members of our community, which includes In-Store Shoppers who are Part-Time Employees," a spokesperson from Instacart's San Francisco headquarters told Motherboard following news of the Union's victory. "We will always support Employee freedom and choice and we respect our Employees’ rights to explore Unionization."

"Pending certification of the election results, Instacart will honor the outcome of this election and the decision of these fifteen Part-Time Employees in Skokie to choose Union Representation," the spokesperson continued. "We will then begin the process of negotiating in good faith on an initial Collective Bargaining Agreement that covers this location.  While (this) election only affects In-Store Employees assigned to this store, we remain committed to providing the best experience for all customers and Employees.”

One of the Union Campaign’s Lead Organizers, Joe Loftis, told Motherboard that his Instacart Co-Workers decided to Unionize to address high turnover, the rapid pace of work, and the opaque algorithm for rating Employees.

He told Motherboard that Employees currently earn $13 an hour, the minimum wage in Skokie - and are capped at 29 hours a week, which means they do not receive health care and other benefits.

For many of these Workers, it’s a second job.

To Continue Reading This Labor News Story, Go To: www.vice.com/en_us/article/qjdvgm/instacart-workers-win-historic-union-election?fbclid=IwAR2tEcEsButmuDHy5LN-UueP3kjTap8kRVWlCI-SRAmkMvnM94pbmawOflU