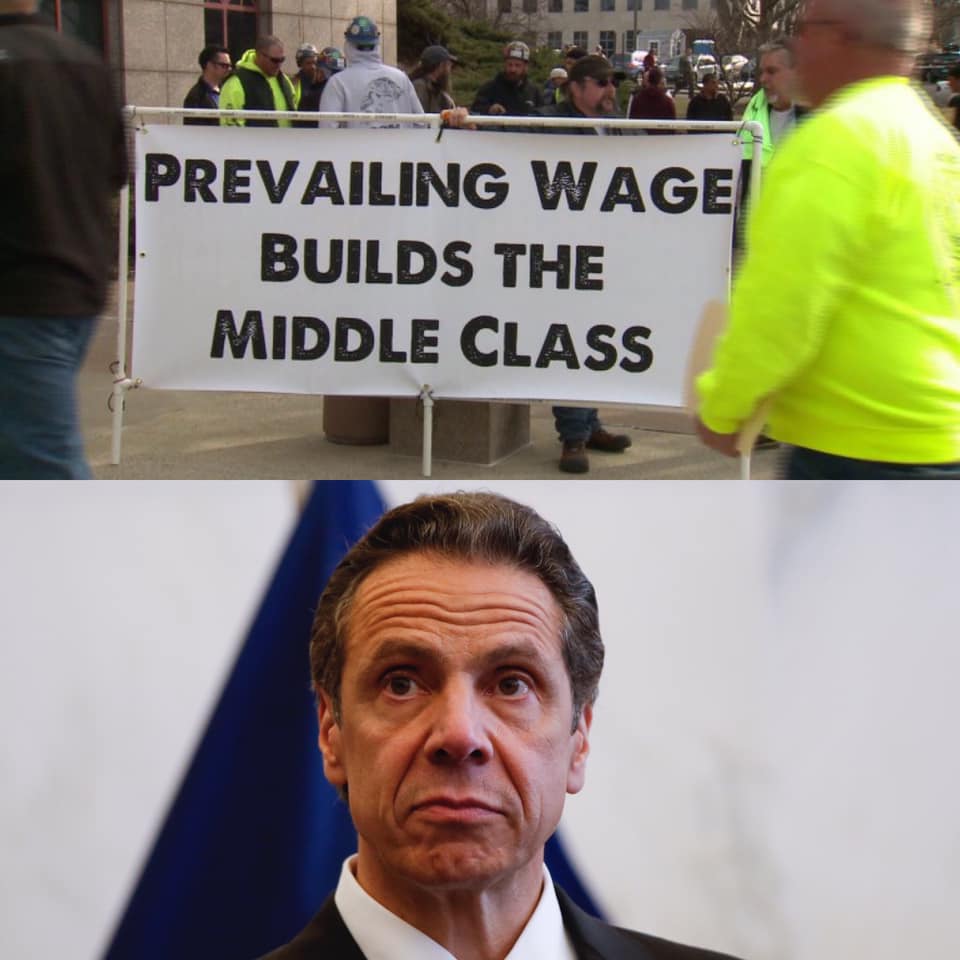 (NEW YORK CITY) – In a little over a week, approximately 4,000 Building Service Workers could either be lifted out of poverty or remain there with or without the stroke of Governor Andrew Cuomo’s pen, according to 32BJ Service Employees International Union (SEIU) Vice President John Santos.

“The governor is holding two bills of ours right now,” Santos said at a Thursday (January 30th) afternoon rally held for struggling Con Edison Workers at Pershing Square. “We ‘want to make sure that he signs the bills and help them get living wages at their jobs.’”

The rally was supposed to be held outside the Governor’s Third Avenue Offices, but became so large that it had to be moved a few blocks over to accommodate protestors.

The Prevailing Wage Legislation consists of two bills that, if enacted, would give Con Edison Workers better pay and benefits, but it would need to be signed by Friday, February 7th.

“These Workers ‘deserve respect and dignity,’” Santos said as the Workers chanted, “sign the bill!”

State Assemblyman Michael Blake (Democrat-Bronx) agreed: “Anyone that is working ‘should get quality’ wages.  ‘These are the things that make it fair for our communities whether you are a cleaner, doing maintenance, no matter your job there has to be dignity with that.’”

People who are working shouldn’t be living paycheck-to-paycheck, Blake emphasized.

“You’re ‘wondering whether you are paying your rent, whether you are going to put food on the table,’” the Assemblyman said. “We ‘have to remind people that poverty and the feeling of (being) poor is not tied to a number.’  ‘That’s a day-to-day mindset where you are trying to figure it out.’”

Building Service Worker Carlos Moncayo echoed that sentiment: “I have been working at (418 Central Park West) for seven-and-a-half years.  I make ($18.50) an hour, ‘have unaffordable health insurance and no’ retirement.”

Moncayo is depending on Cuomo to sign the legislation so that he can take care of his family.

“My wife has a medical condition and our medical bills ‘are through the roof!’ Having ‘affordable’ health insurance ‘would change our lives dramatically,’” he said. ” It ‘would also give me the ability to help my young grandkids financially.’  ‘I want nothing more than to continue to provide for my family and making the family-sustaining wage would allow me to do that.’”

Moncayo pledged 32BJ SEIU will continue fighting for the bill until there are better standards at Con Edison.

“I ‘have no idea what will happen, but I will be speaking to his office every day and we will be back in the next couple days if we don’t hear anything,’” Santos said. “We are ‘going to put some pressure on the governor.’”

To Directly Access This Labor News Story, Go To: http://laborpress.org/time-running-out-on-cuomo-to-sign-prevailing-wage-bills/