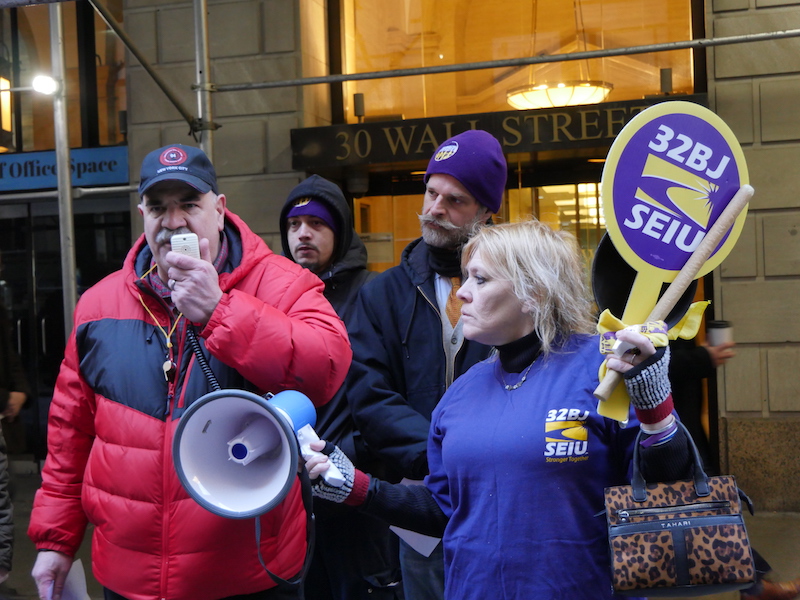 (NEW YORK CITY) - The new decade is starting off bleak this month, for Building Service Workers in the heart of the Financial District who have either been fired outright or forced to reapply for previously good jobs suddenly recast as paltry minimum wage gigs with zero benefits.  But they and their Union Brothers and Sisters at International Union of Operating Engineers (IUOE) Local 94 and 32BJ Service Employees International Union (SEIU) are fighting back in a struggle that also helps expose the myth the U.S. economy is somehow booming under Republican President Donald J. Trump.

Guys like George Iosifidis, Jose Marte and Chris Negrinelli have invested huge chunks of their lives taking care of the high end digs at 30 Wall Street and until the advent of a new building services contractor incorporated just a scant eight weeks ago it was enough to sustain themselves and their families.

Iosifidis spent nearly a quarter century at the property located just down the street from historic Federal Hall, working in turns as a Night-Time Cleaner, Daytime Porter, Building Foreman and Desk Concierge.

On January 8th, three days after Colonnade Management introduced an outfit called Prime Cleaning Solutions into 30 Wall Street’s ecosphere, Iosifidis was terminated or as he said during a joint Union demonstration held outside the property earlier this week: “Kicked to the curb like trash.”

“The building manager offered me a phone number to call Prime Cleaning Solutions (after they denied him an application),” Iosifidis said. “I called the number and then they told me that my job was ‘eliminated,’ and ‘thank you for your service, we don’t need you anymore,’”

After six years working at 30 Wall Street, Marte described suddenly having his salary virtually halved and his health insurance eliminated as a “major blow” - one that landed him in the hospital for a week.   “I ‘don’t even know what I’m going to do to get the medication I need and continue to support my family,’” Marte told LaborPress. “It’s an ideal idea for the building owner - ‘they use a third party to hide behind and then they pull the strings.’”

Building Engineer Chris Negrinelli spent nearly a decade at 30 Wall Street before being fired this year.  Despite the stress of losing his long-time job, the father of two urged Union Solidarity and said his fellow Trade Unionists have demonstrated incredible support.

“This is my family here,” he said this week. “So many people ‘reached out to me and cared and (offered) hugs and wished me good [luck] and offered me jobs.’  ‘United we stand - let’s keep it that way.’”

Using subcontractors as cover for heinous Anti-Worker practices may not be the “right way to do things” - but, increasingly, it is the way corporate elites have chosen to help further bolster their bottom line.

To Continue Reading This Labor News Story, Go To: http://laborpress.org/wall-street-wipe-out-crushes-working-families-glimpses-the-ugly-truth-behind-nations-rosy-unemployment-stats/