Following The Sale Of The Buffalo News To Lee Enterprises, The Buffalo Newspaper Guild Pledges To Do Everything In Its Power To Safeguard The Work Their Members Do And The People Who Do It 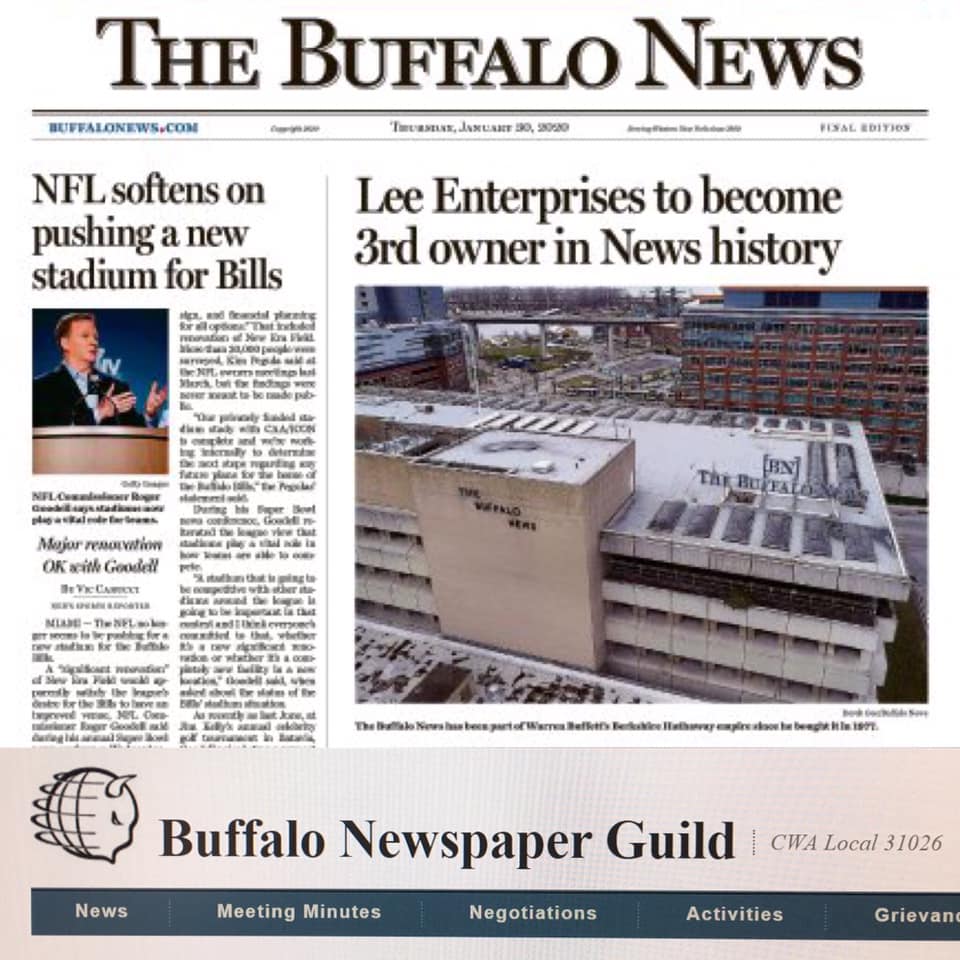 (BUFFALO, NEW YORK) – Following the sale of The Buffalo News to Lee Enterprises earlier this week, Buffalo Newspaper Guild-Communications Workers of America (CWA) Local 31026 is “pledging to do everything in its power to safeguard the work” their members do “and the people who do it.”

Buffalo’s major daily newspaper will now be owned by Lee Enterprises, which becomes the third owner of The News in the newspaper's 140-year history.  It was founded by Buffalo’s Butler Family in 1881.  Investor Warren Buffett’s Berkshire Hathaway took control in 1977.

With this new deal, the Media Giant will own 81 and nearly double its audience.

The total deal is valued at $140 million cash, according to a news release from Lee, and is expected to close in mid-March.

The Union released the following statement after the sale was announced:

Since word broke about the sale of The Buffalo News to Lee Enterprises, the Guild Leadership team has scrambled to research all the implications this may have for our Members.

While there is limited information we know right now, we want to assure all Members that we are doing everything possible to find out what this means for us and to answer as many questions as possible.

Guild Leaders have had a preliminary meeting to discuss the sale and been in touch with National NewsGuild-CWA Leaders.

We are continuing those conversations in the days ahead.

We have also been in the process of gathering more information about the sale and how this will impact the Employees here, including the more than 200 who are represented by the Guild.

For now, what is most important is for our Members to know that our contract remains in full force and effect, and will continue to remain in place even after Lee Enterprises assume full ownership in March.

Those working in Prepress should also know their current contracts also remain in effect.

We have a regular membership meeting scheduled for February 12th.

If we need to have one sooner, we will.

Regardless of who owns us, the Guild will, as always, do everything in its power to safeguard the work we do and the people who do it.

For More On This Labor News Story, Go To: https://news.wbfo.org/post/buffalo-news-sold-lee-enterprises