The Councils Torch Of Leadership Has Been Passed From Another CWAer - Local 1122 President John Mudie, Whos Being Praised For The Legacy He Created - Stepped Down In Order To Devote More Time To The Business Of Running His Union Local 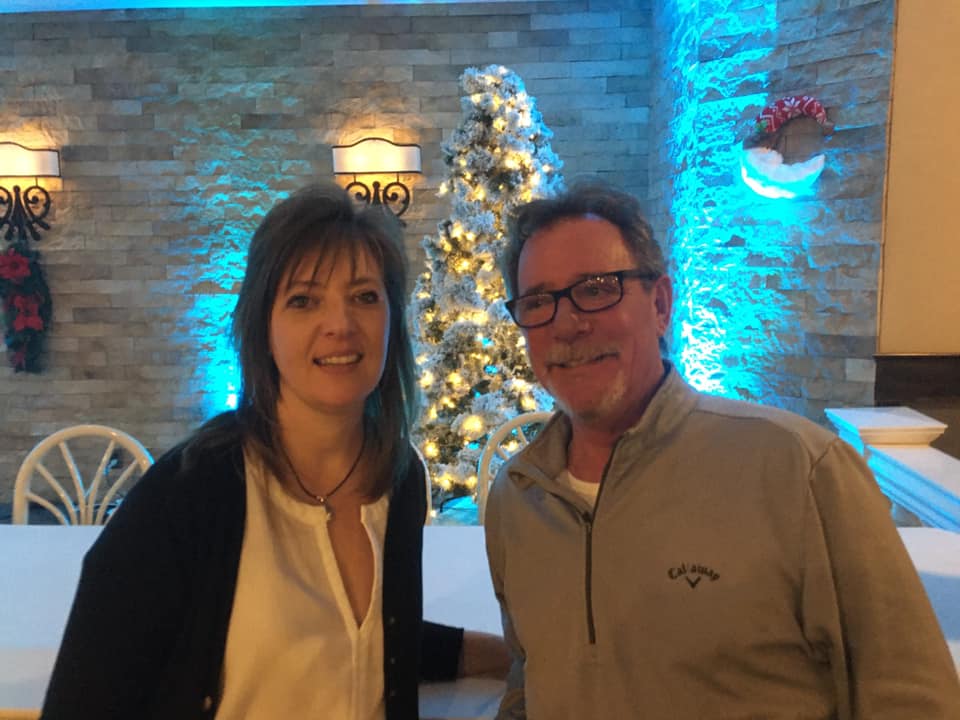 WNYLaborToday.com Editor’s Note: Pictured Above, Denise Abbott - the first woman to lead the Buffalo AFL-CIO Central Labor Council since it was officially founded back in 1957, and John Mudie, outgoing Buffalo Labor Council President, take a moment to enjoy the Holiday Season at the Labor Council’s Annual Christmas Party in December.  (WNYLaborToday.com Photos)

(BUFFALO, NEW YORK) – For the first time since it was officially founded back in 1957, a female Union Leader leads the Buffalo AFL-CIO Central Labor Council - Communications of America (CWA) Local 1168 Health and Safety Director Denise Abbott.

Abbott, who’s currently serving an interim term and is seeking to serve a full three-year term when the Council vote is taken in February, takes the leadership torch from fellow CWAer John Mudie, the President of Local 1122, who’s stepped down in order to devote more time to his Union Local, which is lining up to negotiate three major contracts during the course of 2020.

“Honestly?  I am ‘overwhelmed,’” Abbott, 50, tells WNYLaborToday.com of heading a Labor Council with 70 affiliated Unions and a combined 80,000 Public and Private Sector Members.  “I am ‘overwhelmed by the response from Labor.’  There ‘are a lot of great’ Labor Leaders ‘who have told me that they are happy that I am in this (position of leadership).’” 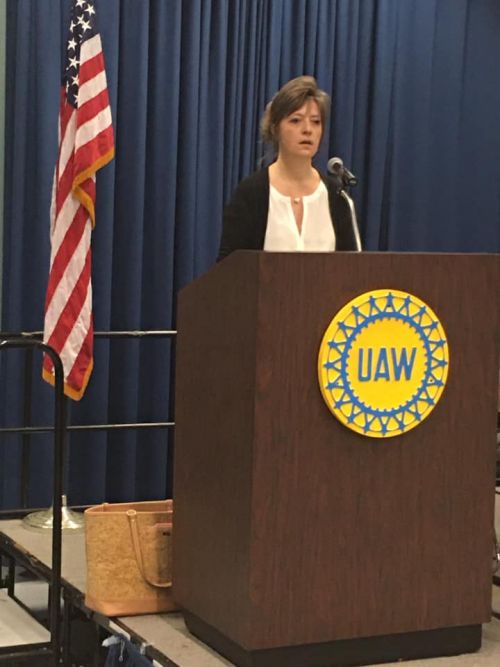 It was both Mudie and Western New York AFL-CIO Area Labor Federation (WNYALF) President Richard Lipsitz who initially reached out to Abbott to determine her interest in heading the Buffalo Labor Council.  “They ‘thought I would be good for it,’” Abbot said.

Mudie said he’d watched Abbott do her job over the years and volunteer for so many of the Buffalo Labor Council’s events, from helping oversee and run the annual Workers Memorial Event to the Buffalo Council’s Summer Picnics to its Labor Day Parade in September.

“She was a ‘natural’ - she’s young, energetic, organized and ‘one hell of a leader.’  I’ve told her that I wish her all the luck (in the job) and that ‘I am here for her as a resource,’” Mudie said.

“John did a ‘wonderful job reviving’ the Buffalo Council ‘and strengthening its participation, all while working closing with the WNYALF,’” Labor Federation President Lipsitz said of Mudie’s five-year tenure. “(Abbott) “is in a ‘perfect position to grow into a job in a big (Labor) city.’”

In regards to her being the first woman to lead the Buffalo Labor Council, Lipsitz said: “This move was ‘long overdue.’  (Abbott) has a ‘good deal of accomplishments.’  ‘She will be good carrying our banner.’”

Said Mudie, 62: “This makes me ‘real proud’ (of Abbott becoming the first woman to head the Buffalo Labor Council).  ‘I didn’t and don’t see her having any opposition.’  I’d talked to others (Leaders in the Buffalo Labor Movement) ‘and they all recommended’ Denise (for the job).”

Said Abbott, who lives in Niagara County, but works in Erie County:  “When they first asked, ‘I thought they were kidding.’  I asked them: ‘You asked others before me, right?’  I’d been in the game ‘long enough, but there are so many others with more experience.’  I went to my Local’s President (Cori Gambini) to talk to her about it and she was ‘okay with me saying yes to it.’  I also asked the (Buffalo Labor Council’s) male Union Leaders: ‘You’re not just asking me because I’m a woman?’  ‘Not one said no.’ They told me ‘it was the best decision and I was just overwhelmed.’” 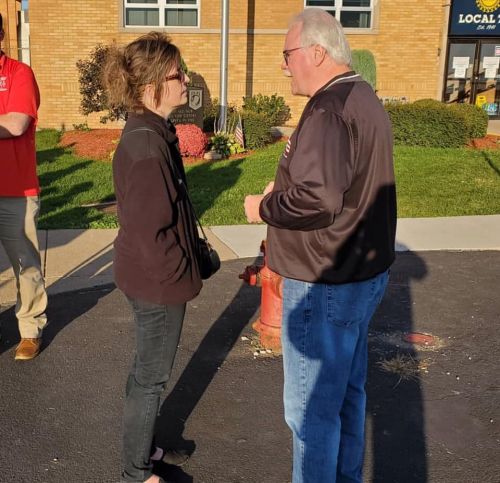 And it wasn’t lost on Mudie that the torch of leadership of the Buffalo Labor Council has now been passed from one CWA Representative to another.

Mudie (pictured below), a CWA Member since 1982, has served as President of his nearly 1,500-Member Local 1122 for the past two years and a number of years previous to that as its Executive Vice President. 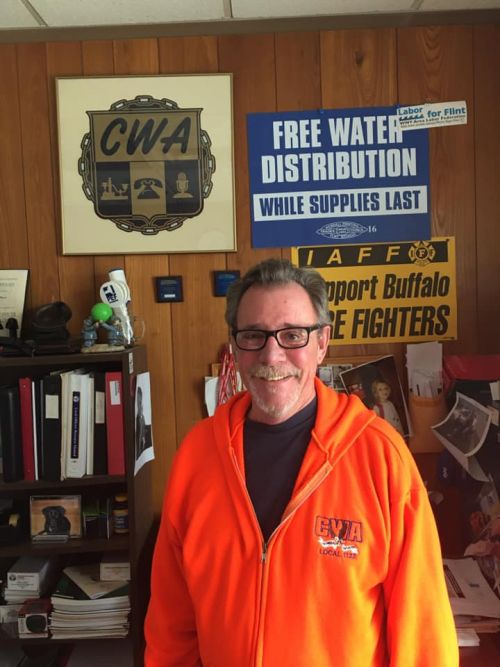 Abbott, who’s been a CWA Member for the past 16 years, has served as Health and Safety Director for CWA Local 1168 since 2013 and has been a Registered Nurse (RN) in the Emergency Room at North Tonawanda’s DeGraff Memorial Hospital for the past 11.

“That was’ big,’” Mudie tells WNYLaborToday.com of the Council being headed by consecutive CWA Leaders.  “Our District ‘loves it.’  Our District Vice President and Regional President Deb Hayes ‘are excited’ because CWA ‘is so interested in our Union being involved in the community.’  ‘At first, I didn’t think about it (consecutive CWA Reps heading the Buffalo Labor Council), but it shows where the CWA is at.’  Our Leadership and Membership is pretty progressive and diverse.’”

Said Abbott: “I am ‘extremely proud to be part of the CWA.’  It is ‘an extraordinary Union.’”

Speaking with WNYLaborToday.com, CWA District One Regional President Debbie Hayes said of the CWA, Mudie and Abbott: “CWA ‘has always been a community-minded Union.’  It has ‘always been important for our Union to reach out and widen our commitment to other Unions’ and John has, and Denise now, has ‘done that.’  ‘I am so proud of and respect John for the work he has done over the years.’  He is a friend and colleague and ‘I wish Denise nothing but the best as the Council’s first woman President.’”

Asked why he decided to give up the Presidency of the Buffalo Labor Council, Mudie told Your On-Line Labor Newspaper: “I ‘just felt I needed to focus more on’ Local 1122’s business.  We have three contracts expire in 2020 (including with the Visiting Nurses Association, ADT and Tycol).  I was ‘also looking for that younger’ replacement.  I had talked to other Labor Leaders ‘and many recommended’ Denise."

Looking back at his five years in the position, Mudie (pictured below) said he is very proud of Labor’s involvement in the Buffalo Community, including helping rebuild the home of a needy woman in Buffalo’s Fruit Belt Section, the Workers Memorial at Chestnut Ridge (“Nobody should ever die on the job.”), increasing the yearly participation in the Labor Day Parade, raising money for the Variety Club Telethon and an amazing amount of donations in water and cash for the residents of Flint, Michigan, whose public water source had been tainted with contaminants due to the decision of government leaders - creating a national embarrassment and bringing about an outpouring of help from across the country. 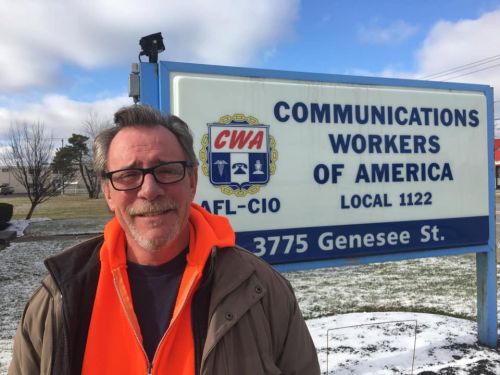 “That was ‘so awesome, filling up a tractor-trailer and a pick-up truck with water and driving to Flint to distribute it to those in need.’  ‘It was great,’” said Mudie, who made the trip himself.

“I ‘would do it all over again.’  And I was ‘honored to be asked’ (to assume the leadership of the Buffalo Labor Council),” he continued.  “I was the Executive Vice President here at Local 1122 ‘and back then I had the support of our President (James Wagner) and our Executive Board.’  ‘But now, the work has piled up and (now) there is twice as much to do.’”

“We ‘have an opportunity to continue to show Labor should not be ignored and that we need to be included.’  Buffalo ‘cannot transition into something better without’ Organized Labor.  ‘And, as Unions, we are all about inclusion,’” Mudie said.

Said Abbott: “I know ‘it is a lot and the responsibility is incredible.’  I still work (as an RN) and as President of the Buffalo Council, I sit on four committees on the Erie County Industrial Development Agency, the WNYALF Board and am still serving as Secretary-Treasurer of the Niagara-Orleans AFL-CIO Central Labor Council.  And I have to attend a lot of events and meetings with business and political people, but since taking over in November - ‘it has been wonderful, great.’  ‘Me being a woman doesn’t change how the job needs to be done.’  ‘I look up to Hayes and Gambini - incredible women.’  ‘I am proud to have been under their wing.’  As we move forward, ‘I will make sure Labor has a voice in our community.’  ‘We will look to continue to organize (more Workers) and build up our numbers.’  2020 is also an ‘important’ election year.  ‘And, again, we will make sure Labor’s voice are heard at the ballot box.’ ‘But what I want people to know that I will always be willing to listen to their concerns and issues.’”