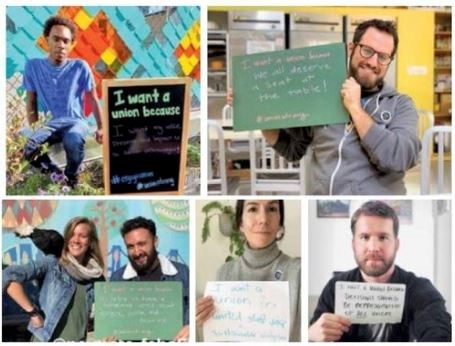 "We ‘got fed up with a lack of pay parity, lack of transparency and not having a voice over the issues that affected us,’" said Rosa Marruffo, Program Manager at PS7. "My Co-Workers and I ‘decided that the best way to make our jobs more sustainable and fix problems was to organize so we could negotiate as equals with management and put everything in a contract.’  ‘Now that we've stood up and made our voices heard, we can't wait to get to the bargaining table.’"

In October 2019, a delegation of Edible Schoolyard Workers delivered a petition for Union Recognition to management with 95% of Workers signed on.

Workers showed management their overwhelming unity and commitment to Unionizing through letters, petitions, and meetings with management and the board.

Management chose to voluntarily recognize the Union instead of fighting at the National Labor Relations Board (NLRB).