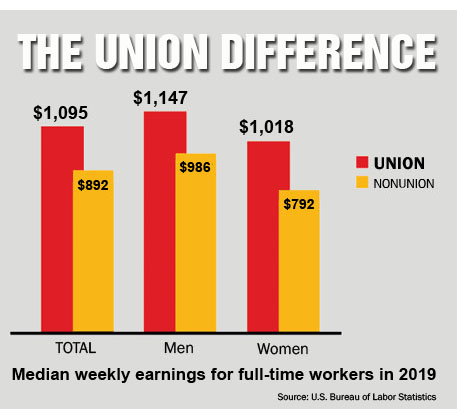 (SEATTLE, WASHINGTON) - A recent national study ranked Washington No. 1 in its 2019 edition of its States With the Strongest Unions.

The U.S. Department of Labor’s Bureau of Labor Statistics (BLS) has released its 2019 Union Membership Report and although the number of Union Members in Washington dropped slightly from 649,000 in 2018 to 638,000 last year, the Evergreen State maintains its position as the third most Unionized State in the Nation.

At 18.8% of the workforce, Washington’s Unionization Rate is unchanged from two years ago, but as the state economy and overall employment have grown, Union Membership has also increased since 2017 from 584,000 to 638,000.

“Its ‘great news for all Washington workers and our state economy that we remain Union Strong,’” Washington State AFL-CIO Labor Council President Larry Brown said. “Union Members ‘earn more money, they boost our state and local economies, and they fight for improved working standards for everyone.’  ‘That’s the power of joining together to negotiate a fair return on your work.’”

That 23% Union Difference means that Full-Time Union Members make about $56,940 per year on average, which is about $10,500 more than Non-Union Workers.

The Union Difference is even greater for women, who earn 28.5% more when they are Union Members.

National Union Membership Levels, which have dropped in recent years as Republican Lawmakers and Conservative Court Decisions have actively discouraged Unionization, dropped again slightly from 10.5% to 10.3% in 2019, according to the new BLS report.

The National AFL-CIO noted the latest national statistics “reflect both the tremendously difficult barriers Workers seeking to form a Union continue to face and the unmatched resilience of Working People in our desire to win bargaining power on the job.”

With its 18.8% Union Membership Rate, Washington is the third most Unionized state in the Nation.

Only Hawaii (at 23.5%) and New York (at 21%) have a higher percentage of their workforce Unionized.

The comparatively low National Union Membership Rate of 10.3% is driven down by so-called Right-To-Work (for less) States like South Carolina (2.2%), North Carolina (2.3%), Virginia (4%), and Texas (4%) that actively discourage Unionization.

The BLS said that in 2019, 28 states and the District of Columbia had Union Membership Rates below that of the U.S. average, 10.3%, while 21 states had rates above it and one state had the same rate.

Eight states had Union Membership Rates below 5.0% in 2019. South Carolina and North Carolina had the lowest rates (2.2% and 2.3%, respectively).

The next lowest rates were in Texas and Virginia (4% each).

Over half of the 14.6 million Union Members in the U.S. lived in just seven states: California, 2.5 million; New York, 1.7 million; Illinois, 0.8 million; Pennsylvania, 0.7 million; and New Jersey, Ohio, and Washington, 0.6 million each, though these states accounted for only about one-third of wage and salary employment nationally.

To Continue Reading This Labor News Story, Go To: www.thestand.org/2020/01/more-proof-that-it-pays-to-join-together/?fbclid=IwAR35KGfUfz4NGyjNyFkafE5n0Yw6bwU_hdMjcONHHZ9fYpw_uNlDSr4Hw3M

For More On The BLS Report, Go to: www.bls.gov/news.release/union2.nr0.htm