STRIKE! - How A Board Game Can Influence Organizing 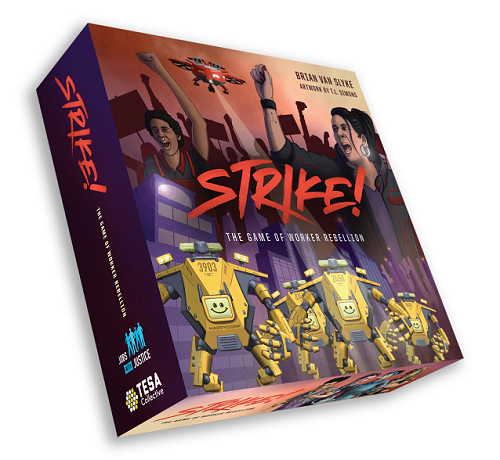 The time is ripe for STRIKE! The Game of Worker Rebellion, a board game where you mobilize Workers around your city to defeat a nefarious mega-corporation.

With Workers joining together and taking action around the country - from Teachers to Tech Workers, Hotel Employees, Nurses, Gig Economy Contractors and so many more – we haven’t seen this kind of display of Labor Power since the 1980s.

So, that’s great and all - but why a board game?

Aren’t they kind of old school?

The fact is that we are actually living in the golden age of board games - more people are playing board games now than ever.

Thousands of new board games are released every year.

Board games are played by millions of people and it’s one of the fastest-growing hobbies in the world.

And - in fact, on some crowdfunding platforms, a primary source of sales for the game market, board games have been outperforming video games.

Like all forms of art and entertainment, board games are often a reflection of our values as a society and they can also influence how we act and what we think about.

That’s why we at The TESA Collective create games that are about fighting for a better future and envisioning the world we want to see.

Our previous titles have includes Rise Up: The Game of People & Power, Co-opoly: The Game of Cooperatives, and Space Cats Fight Fascism.

So when the opportunity came for us to collaborate with Jobs with Justice to make a game by and for the Labor Movement, we were ecstatic.

While it’s not well known, there’s actually a vibrant and powerful history of games being used to fight for a better world, stretching back over 100 years.

But today, we’re all used to the overwhelming number of games that are about war and exploitation.

That’s why we thought it was high time for a game that was about building the power of Working People - an unabashedly a Pro-Labor game.

When we began the design process for STRIKE! with Jobs with Justice, it was obvious that we wanted this to be a culture change initiative.

It needed to be something that appealed to both people who are well-versed in the Labor Movement, as well as for those who are only peripherally aware.

As a result, we decided to give the game a bit of a futuristic, and somewhat comedic feel to attract a wider audience.

In the game, every player is working together to take on the megacorporation known as HappyCorp, which is attempting to take over your city.

HappyCorp can be a stand-in for a number of real-world faceless behemoth corporate entities that try to position themselves as friendly, helpful forces that are in reality just trying to squeeze as much profit out of us and our communities as possible.

In STRIKE!, HappyCorp is trying to turn your city into a privatized metropolis.

If they succeed, there will be no more Unions, no more Minimum Wage, and no more protections for Working People.

To Continue Reading This Labor News Story, Go To: www.jwj.org/strike-how-a-board-game-can-influence-organizing