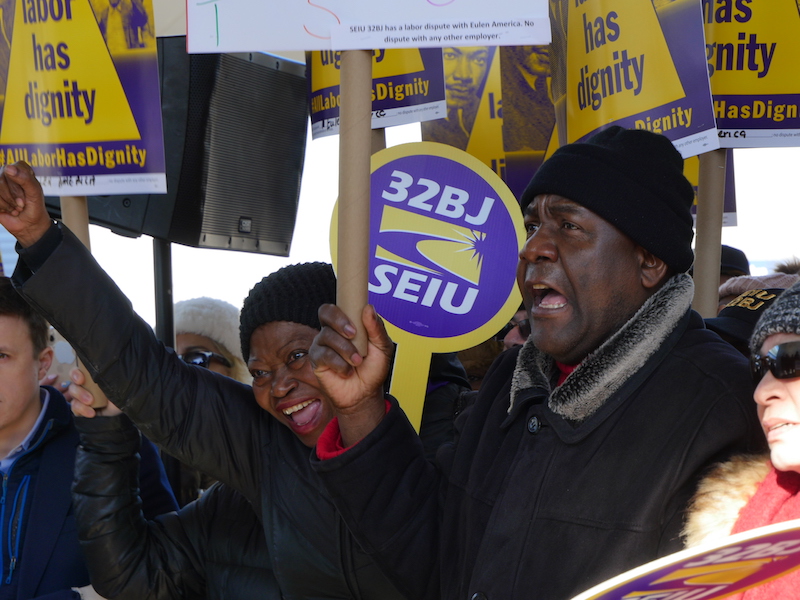 (NEW YORK CITY) - Low-wage Workers who help move multitudes in and out of New York and New Jersey Airports daily, but still can’t afford the prohibitively high cost of private health insurance, are hoping this is the year legislators on both sides of the Hudson confront tight-fisted employers.

Earlier this week, hundreds of Workers at JFK International Airport rallied with 32BJ Service Employees International Union (SEIU) in support of the Healthy Terminals Act - a Bill that, if enacted, would compel employers to provide Baggage Handlers, Wheelchair Attendants, Cabin Cleaners and other Airport Workers with a $4.54-an-hour wage supplement to purchase health insurance.

“Everybody is struggling,” Airport Cleaner Delrose Kelly told LaborPress. “This would help a lot.”

Union Leaders, clergy members and supportive city and state officials invoked the legacy of Dr. Martin Luther King, Jr. and his fight against poverty and economic inequality, as well as 32BJ’s six-year campaign to successfully secure Union Representation, paid time off and higher wages for struggling Airport Workers, in calling for passage of the Healthy Terminals Act.

“Without the type of ‘employer paid, affordable, quality’ health care insurance that ‘many’ 32BJ Members ‘already have,’ Workers at airports ‘are forced into difficult choices and difficult decisions and difficult realities that many American Workers face when it comes to health care,’” 32BJ President Kyle Bragg told demonstrators. “Some employers provide health plans that have premiums, co-pays, deductibles ‘that are so high - they are effectively out of the reach of those Workers.’”

A JFK Terminal 1 Wheelchair Attendant named Tracy said Airport Workers who have spent the last six years fighting for economic justice need the “final piece.”  “We ‘need health care and we need it now - not tomorrow,’” she said. “We ‘cannot continue, we need your votes (and) we need this to happen now.’”

Passage of the Healthy Terminals Act would affect some 40,000 low-wage Airport Workers in New York and New Jersey.

Hard-pressed Airport Workers point out that their daily interactions with thousands of travelers from all over the world make them especially vulnerable to illness.

“Every ‘new virus that comes on line - the first line of defense is right here at this airport,’” 32BJ Vice-President Rob Hill said. “And if those Workers ‘can’t go to the doctor…they can’t take care of their long-term medical needs…they’re not going to live lives as long as other people who have health care because the airlines have decided that they don’t deserve it.’”

Airport Workers in New York and New Jersey will begin earning a $19 an-hour Minimum Wage in 2023 - a direct result of 32BJ’s campaigning.

Without new legislation, however, Bragg warned that untenable medical bills could effectively erase all the gains 32BJ has made over the last six years organizing and advocating for Airport Workers.

“Unpaid medical bills ‘lead to long-term financial trouble,’” Bragg said. “They can ‘erase all the gains we’ve made fighting for economic justice - plunging some, not into just debt and poverty, but also into bankruptcy.’  ‘We cannot be okay with that.’”

To Directly Access This Labor News Story, Go To: http://laborpress.org/ny-nj-airport-workers-we-need-health-insurance-now/