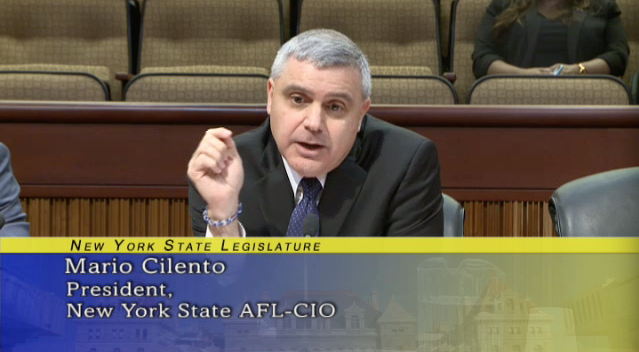 (ALBANY, NEW YORK) – Testifying before the New York State Assembly Standing Committee on Labor during a public hearing that was held on Workers in the Gig Economy in December, New York State AFL-CIO President Mario Cilento stressed to lawmakers that it is imperative Workers in the Gig Economy be considered Employees and must not be left behind when it comes to Worker Protections and Rights.

Now, Cilento - who heads the Statewide Labor Federation of 3,000 Unions, which combine to represent 2.5 million Workers, is now applauding New York State Governor Andrew Cuomo’s public commitment that was just made during this annual State of the State Address to protect Gig Economy Workers.

“Governor Cuomo is once again standing up for Working People by calling for an end to the exploitation of Gig Economy Workers.  I applaud the Governor for his commitment to ensure Gig Economy Workers are treated equally and fairly.  We look forward to working with the Governor and Legislature to pass legislation that guarantees these workers will no longer be denied the rights and protections all other Working Men and Women enjoy," Cilento said.

In his testimony before the New York State Assembly Standing Committee on Labor hearing last month, Cilento stressed that it was imperative Workers in the Gig Economy be considered Employees and must not be left behind.

“Let me be very clear, any legislation passed must ensure that App-Based Workers are Employees and receive all the same rights and protections as all other Employees in this state, including the right to organize,” he said. “One of the false arguments from app companies is that by classifying Workers as Employees, Workers will lose schedule flexibility.  That is simply not true.  For example, Part-Time Workers are classified as Employees and have flexible schedules. In addition, there is nothing that precludes app companies from continuing the practice of flexible scheduling.”

The New York State AFL-CIO had convened a work group of Unions concerned about rights for Gig Economy Workers two years ago and then commissioned a report about the plight of Gig Workers in New York State.

The report was published last Spring by the Cornell University, School of Industrial and Labor Relations.

The Statewide Labor Federation also coordinated with stakeholders, met with Gig Workers and plans to propose and advocate for enactment of comprehensive legislation this session that would ensure Gig Workers are treated equally.

“This has always been about app companies gaming the system to bolster their profits by simultaneously depriving Workers of their rights, disadvantaging traditional employers who play by the rules and shifting their responsibility onto the government and ultimately the taxpayer,” Cilento said. “Gig Workers perform the same jobs as Workers classified as Employees, yet do not have the same rights and protections.  We will not rest until this injustice is rectified.”

To Directly Access This Labor News Report, Go To: https://nysaflcio.org/press-releases/new-york-state-afl-cio-state-legislators-don-t-leave-app-based