AFT Lawsuit Claims DeVos 'Capriciously' Repealed Borrower Protections - The Lawsuit's Message Is Clear: "Protect The Students Of The United States Of America - Not The For-Profit (Schools) That Are Making A Buck Off Of Them." 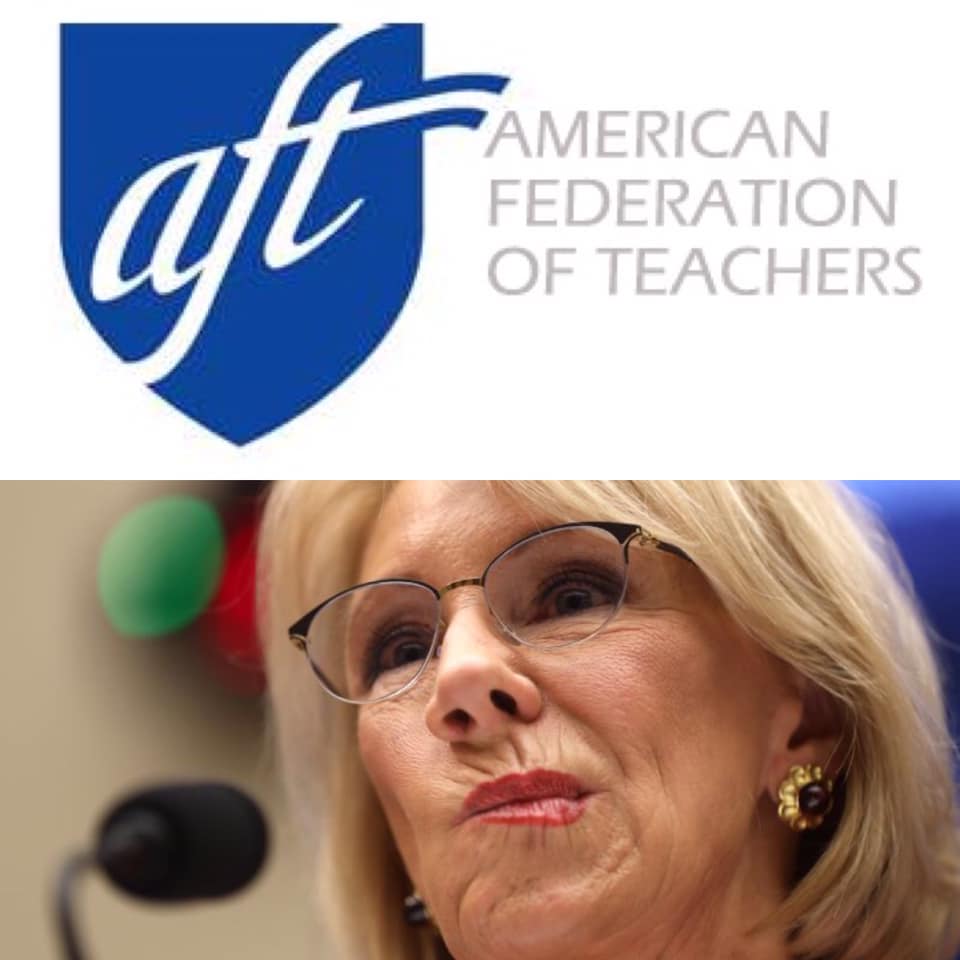 (WASHINGTON, D.C.) - One of the Nation's largest Teachers’ Unions is expected to sue U.S. Education Secretary Betsy DeVos - the complaint: She repealed a rule meant to protect student loan borrowers from for-profit and career-focused schools that graduate them with too much debt and limited job prospects.

Randi Weingarten, the President of the 1.7 million-Member American Federation of Teachers (AFT), says the lawsuit's message is clear: "Protect the students of the United States of America - not the for-profit (schools) that are making a buck off of them."

The 2014 rule that DeVos repealed, known as "Gainful Employment," served as a warning to for-profit colleges and any school that offers career certificate programs: If graduates don't earn enough income to repay their student debts, schools could lose access to Federal Aid.

Because many of these programs derive the bulk of their revenue from Federal Student Loans and Grants, it was a potentially devastating threat.

So devastating that, Weingarten says, "the rule worked.”

“What started happening is that these places - not just the for-profits, but anyone who was covered by this - they started cleaning up their act," she said.

When the Obama Administration began working on a Gainful Employment Rule back in 2010, some for-profit institutions started to make changes, trying to head-off a potential reckoning.

In a press release, Kaplan said the move would "lower the risk that the Federal Government lends money unnecessarily to students with a low chance of success."

And in its 2011 annual report to the U.S. Securities and Exchange Commission, another for-profit heavyweight, ITT Educational Services, Incorporated, captured the fear in the for-profit sector: "Changes resulting from the (Gainful Employment) Requirements could reduce our enrollment and/or increase our cost of doing business, perhaps materially."

In other words: Schools were so threatened by the possibility of losing access to Federal Aid, they started making changes years before Gainful Employment even became a rule.

"I have said quite often in the last few years that the opponents of the (for-profit) sector should just declare victory and go home," says Steve Gunderson, the President and CEO of Career Education Colleges and Universities (CECU), a membership organization that serves as the national voice for career education schools. "Their message was heard and the sector responded."

The first round of official data on gainful employment was released in January 2017 - it showed that more than 700 programs had failed to meet the new standard - what the department considered a reasonable ratio of a student's debt to income.

That same month, Donald Trump was sworn in as president.

The following month, DeVos was sworn in as his Education Secretary.

From the beginning, DeVos ignored the Gainful Employment Rule - even after 18 state attorneys general sued her, demanding that she enforce it.

In 2019, the department officially repealed the rule.

To Continue Reading This Labor News Story, Go To: www.npr.org/2020/01/22/798128256/teachers-union-lawsuit-claims-devos-capriciously-repealed-borrower-protections?utm_term=nprnews&utm_campaign=npr&utm_medium=social&utm_source=facebook.com&fbclid=IwAR1NCvLoma9GutGfipmAT45c3TLahTqvQmd9sLEIFh6IZNcZ7x6O-1Tn0iQ&fbclid=IwAR3lljIWRYvlNEIbVxXIgnv0jQxd7d0Tko4S1va7I6IFYBLaXhb0liFs1UA