At The SAG Awards, Actor Robert De Niro âVoices His Support For His Unionâ & âCalls On Voters To Look For Candidates Who Support Unions Themselvesâ 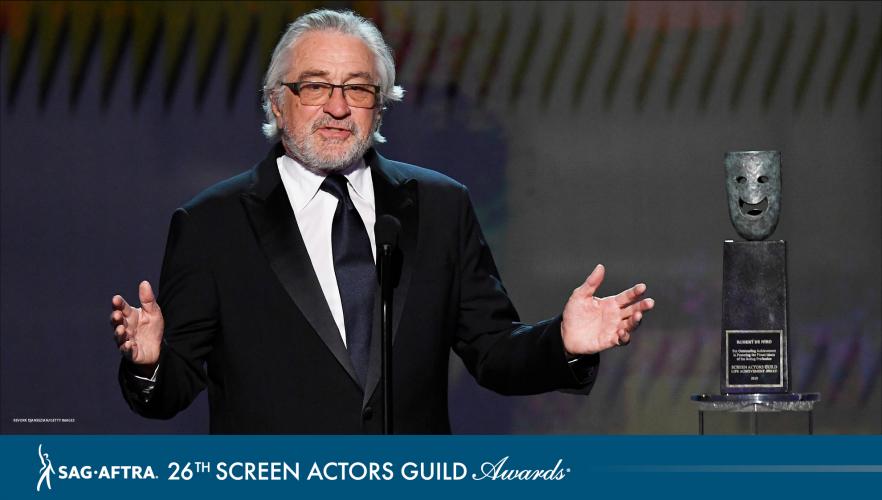 (LOS ANGELES, CALIFORNIA) – Legendary Actor Robert De Niro reserves his right to speak up, so that's exactly what he did in his Screen Actors Guild (SAG) Awards speech on Sunday night (January 19th).  While accepting his Lifetime Achievement Award, De Niro voiced his support for his Union and called on voters to look for candidates who support Unions themselves.

"Political leaders who support Unions are more likely to support (the) Affordable Care Act, equitable taxes, humane immigration regulations, a safe environment, a diverse citizenry, reproductive rights, sensible gun control and fair wages and benefits," he said. "We owe them our support and we owe them our vote."

De Niro stopped short of announcing his own endorsement on stage: "I can imagine some of you are saying, 'All right, all right, let's not get into the politics,' but we're, we're in such a dire situation, so deeply concerning to me and to so many others, I have to say something."

He went on to quote a statement he gave to a Hollywood Trade Publication asserting his right "as a citizen" to "voice my opinion."  "If I have a bigger voice because of my situation, I'm going to use it whenever I see a blatant abuse of power," he said.

De Niro has been an outspoken critic of Republican President Donald Trump.

In addition to receiving his special award, the New York Actor was nominated for a SAG Award this year for his role in Martin Scorsese's "The Irishman."

He has previously been nominated four times - in 2017 for "The Wizard of Lies" miniseries, twice in 2013 for his role in "Silver Linings Playbook" and in 1997 for "Marvin's Room."

He has never won.

The SAG Life Achievement Award is given every year to an actor who fosters the "finest ideals of the acting profession," the group said in November in announcing De Niro's honor.

To Directly Access This Labor News Story, Go To: www.cnn.com/2020/01/19/entertainment/robert-de-niro-sag-life-achievement-award/index.html?fbclid=IwAR3mf2BNMSJshP8ODzEUCsgKEL8nT3hjvfhypkgr6CsTUnpWBps64vrrafY

And For More, Read: Union Members Sparkle And Shine At 26th Annual SAG Awards, At: www.sagaftra.org/union-members-sparkle-and-shine-26th-annual-sag-awards