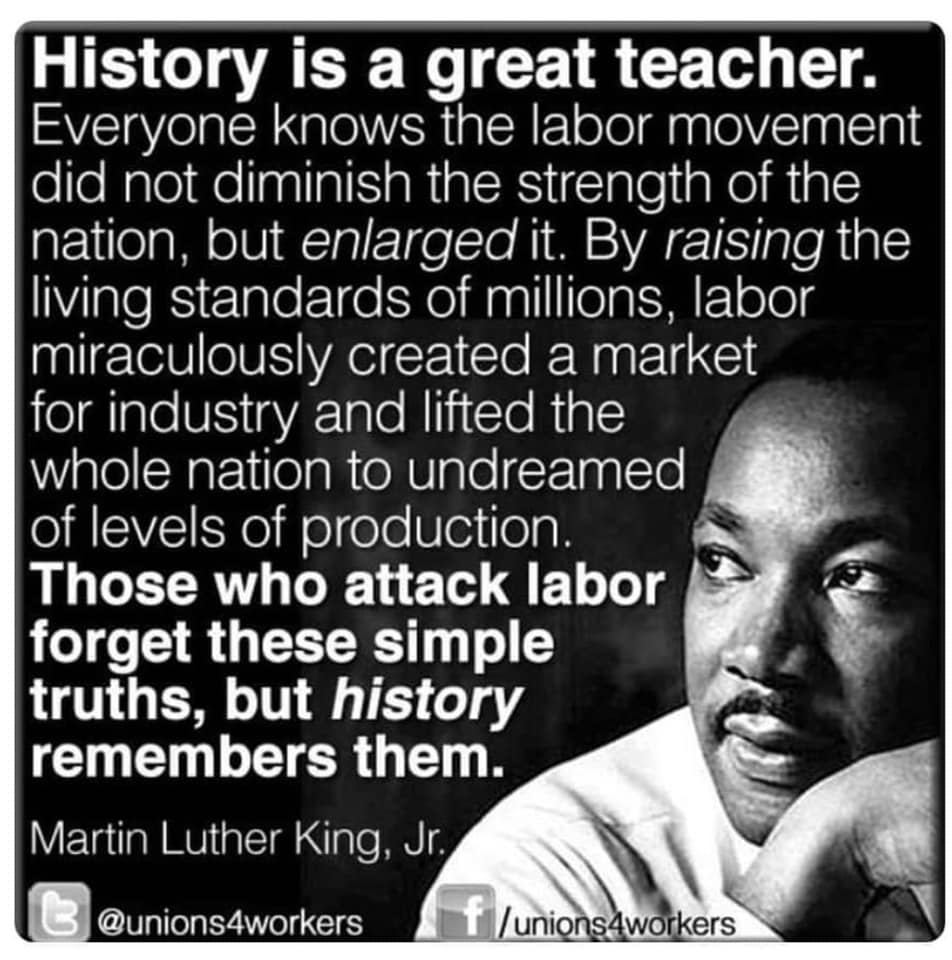 On what would have been his 91st birthday, we celebrate the towering legacy of Dr. Martin Luther King, Jr. - his moral force as a faith leader, his devotion to non-violent resistance and, of course, the sacrifices he made to end legalized segregation in the South.

But there is an often-overlooked aspect of his work: Dr. King was one of his era’s most fearsome champions of Working People coming together to organize, build power and improve their lives.

Here’s how he put it in a speech to the Illinois AFL-CIO Convention in October 1965: The Labor Movement was the principal force that transformed misery and despair into hope and progress.  Out of its bold struggles, economic and social reform gave birth to unemployment insurance, old age pensions, government relief for the destitute, and, above all, new wage levels that meant not mere survival but a tolerable life.

Dr. King understood the Union Difference - the way that a voice on the job and a seat at the table empowers Workers of all races.

It means a bigger paycheck at the end of the week.

It means better health benefits, so you can afford to see a doctor when you’re sick.

It means security in retirement when your working days are done.

It means the basic dignity and respect you deserve.

And he knew that the wealthy corporate interests seeking to crush Labor - to take away the Union Difference - would resort to dishonesty and demagoguery to gain an edge.

Here he is in 1961, warning about the perniciousness of so-called Right-To-Work (for less) Laws: In our glorious fight for Civil Rights, we must guard against being fooled by false slogans, such as ‘Right To Work.’  Its purpose is to destroy Labor Unions and the freedom of collective bargaining by which Unions have improved wages and working conditions of everyone.  Wherever these laws have been passed, wages are lower, job opportunities are fewer and there are no Civil Rights.

Dr. King’s focus on economic issues intensified in the latter part of his life, with the launch of the Poor People’s Campaign in 1967.

And his very last campaign was a Labor action.

They asserted their humanity with a simple, proud slogan: “I AM A MAN.”

On March 18th, Dr. King addressed Sanitation Workers and community members at Mason Temple in Memphis: “You are demanding that this city will respect the dignity of Labor.  So often we overlook the work and the significance of those who are not in professional jobs, of those who are not in the so-called big jobs.  But let me say to you tonight that whenever you are engaged in work that serves humanity.  It has dignity and it has worth.  All Labor has dignity.”

Two and a half weeks later, on his next trip to Memphis, Dr. King was assassinated.

But his message in Memphis and throughout his life continues to be a call to action for everyone who believes in Economic Justice.

In Dr. King’s name, we keep fighting for the idea that “all Labor has dignity,” that the Union Difference can lift up more Working Families, invigorating our communities and strengthening the entire Nation.

To Directly Access This Labor Perspective, Go To: www.theroot.com/dr-king-understood-the-power-of-unions-1841046468?fbclid=IwAR1X9-8yCMi57wKR-_35Rj725j_U2EZYnHc9eQV7GzcCpMvGGfZjiA_wT8E