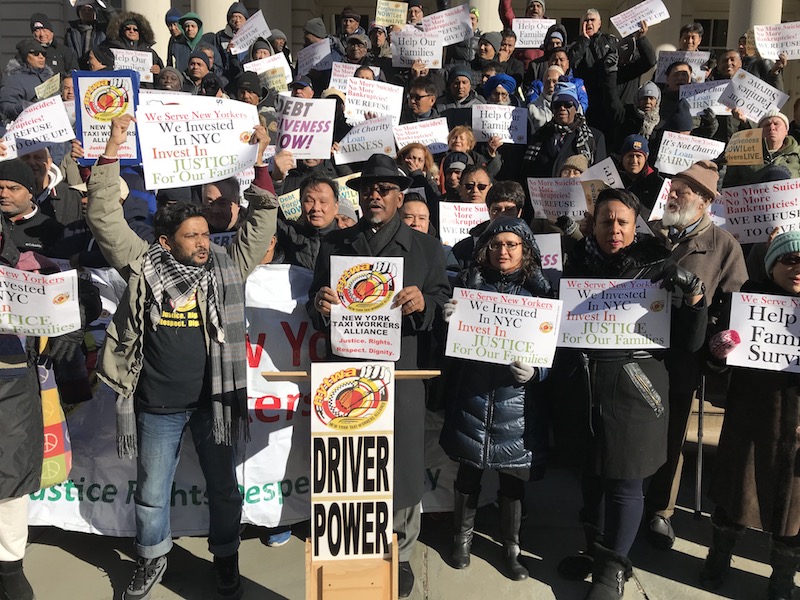 (NEW YORK CITY) – New York City Representative Gregory Meeks (Democrat-Queens) introduced a Bill last week to exempt debt relief for Taxi Drivers from Federal Taxes.  The measure, co-sponsored by all of the city’s House Members - plus Long Island Republican Peter King, is a second front in the struggle to win relief for Yellow Cab Owner Drivers who owe hundreds of thousands of dollars on medallions they bought at inflated prices before the arrival of Uber and Lyft burst the bubble and decimated their value.

It’s necessary, a group of City, State and Federal Legislators said at a City Hall press conference late last week, to protect a Driver who gets $500,000 in debt forgiven against being whacked with a $150,000 tax bill.

Almost 1,000 of the city’s 6,000 Medallion Owner-Drivers have filed for bankruptcy, Meeks said, and the average amount they owe on their medallions is $600,000, said Bhairavi Desai of the New York Taxi Workers Alliance (NYTWA).

Three of the nine Cab Drivers who have committed suicide since November 2017 were Yellow Cab Owners who owed more than the medallions were worth.

Representative Nydia Velázquez (Democrat-Brooklyn) said it would be “sadly ironic” if Drivers had to pay taxes on forgiven debt, which the Internal Revenue Service (IRS) generally counts as income.

It was announced last week that it would expand the exemption it gives people whose fraudulent student loans were forgiven.

Regulators were “sleeping at the switch” instead of going after predatory lending techniques, Velázquez said, and the city made $850 million in revenue selling medallions aggressively as prices inflated.

Meeks hopes to get the legislation enacted before the April 15 tax deadline.

“We’re going to attach it to a bill we know will pass the Senate,” he told LaborPress, such as a budget appropriation.

Representative King’s support is crucial, he added, to show Senate Republicans that it’s a bipartisan effort.

In Albany, state Sen. Jessica Ramos (Democrat-Queens) has introduced the Taxi Medallion Guarantee Act, which would give banks $175,000 to forgive loans from Drivers who can’t pay them.

To Continue Reading This Labor News Story, Go To: http://laborpress.org/house-bill-aims-to-help-nyc-cabbies-survive-underwater-medallion-loans/