For The Love Of God, Ask The Candidates About Unions! 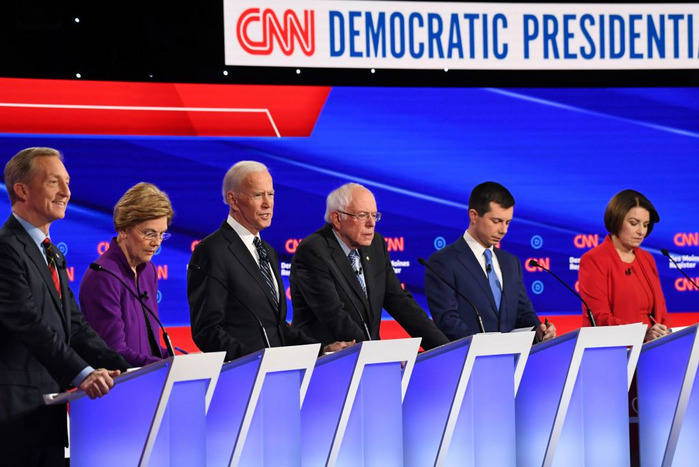 The American Labor Movement has been under attack for decades, but you wouldn’t know it from watching the Democratic Primary Debates.

Last week, moderators mentioned Unions once - specifically a Labor Federation, the AFL-CIO, and only to ask Bernie Sanders why he opposed the USMCA Trade Deal that the Union endorsed.

This meager exchange is still something of an improvement on most previous debates.

When Unions have come up at all, it’s usually thanks to the candidates, who invoke “good Union jobs” to polish their economic proposals or to criticize Medicare for All.

To date, debate moderators themselves have not asked candidates a single direct question about Labor Rights.

That’s a serious oversight and it should be remedied by the moderators of the next Democratic debate in February.

If they don’t, not only will they misjudge the true import of the debate’s location - in Las Vegas, the home of the powerful Culinary Workers Union - they’ll miss the point of the debates themselves.

These monthly spectacles are supposed to have a purpose: They’re opportunities for voters to hear from candidates on the most urgent issues of our time.

Instead, we’ve endured months of barely distinguishable debates marked by nearly identical questions about Medicare for All.

Certainly no one would seriously dispute that health care reform is important - it is both a priority for voters and a litmus test distinguishing the field’s progressives from its moderates, but Unions merit at least a fraction of the same attention.

Union losses are concentrated in the Private Sector, where only 6% of Workers are Union Members.

Those figures stand in sharp contrast with the United Kingdom, where just over 23% of the overall workforce belonged to Unions in 2018, a category that includes 13.4% of Private Sector Workers.

The U.S. has such low rates of Union Membership largely because its Labor Laws are much weaker than those of many other developed nations.

The Taft-Hartley Act of 1947 substantially restricted the rights of Unions and expanded those of employers.

Decades of Right-To-Work (for less) Laws followed its passage, sapping the Labor Movement’s former strength until it reached its present state of decline.

But the Labor Movement isn’t dead.

Workers still Unionize, Strike and win important gains, as the Teachers’ Strike Wave helps prove, but the movement’s woes demand swift attention from the next President of the United States, and debate moderators should ask candidates about their plans.

Ask them to explain the decline in Union Membership.

To Continue Reading This Labor Perspective, Go To: http://nymag.com/intelligencer/2020/01/debate-moderators-need-to-ask-candidates-about-labor-rights.html?fbclid=IwAR0zH5V5-lgdz1ZHZpyuJ-3ktKobvJPYl39Pfz9MvtL71l1v6-D2GoEKuHc