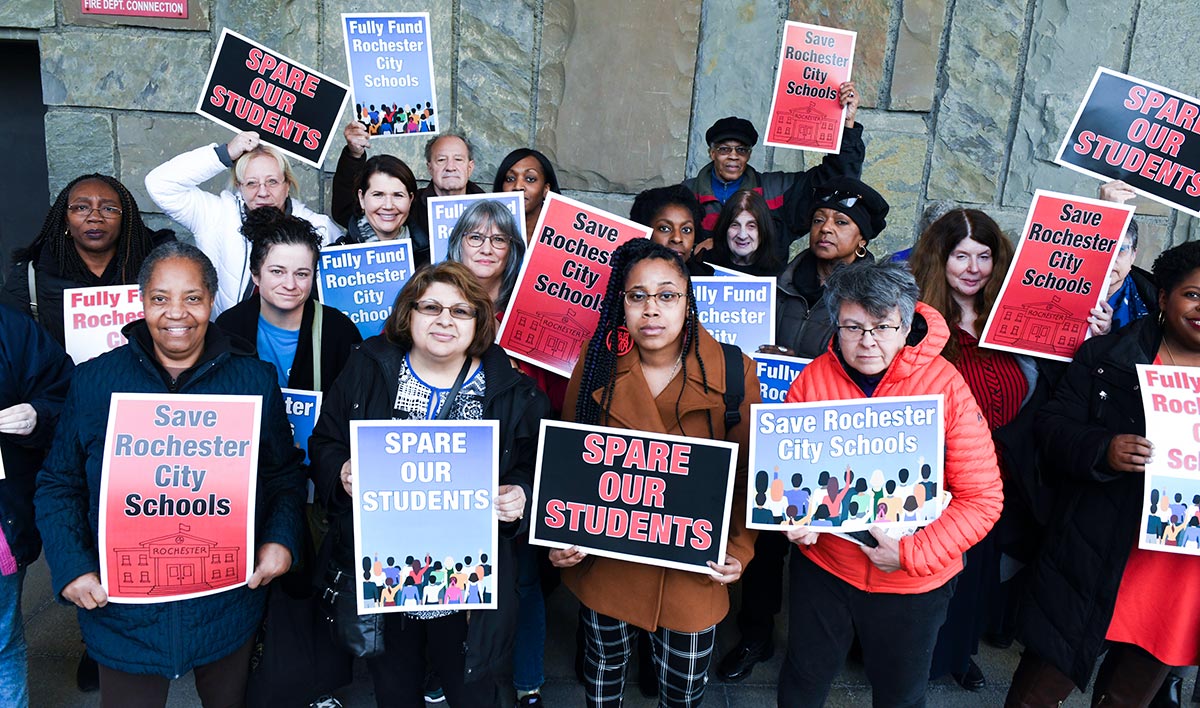 (ROCHESTER, NEW YORK) - Social Studies Teacher Rakia Hardaway boarded a bus for Albany this week, wearing bright lipstick and an optimistic orange dress.  She joined colleagues and officers of the Rochester Teachers Association (RTA) and the Rochester Association of Paraprofessionals (RAP) for a trip to the Capitol to make things right for a high-needs district that was assaulted by more than 100 mid-year layoffs.

“I teach civics.  I ‘can’t teach kids to be active in government and not take action myself,’” Hardaway said.

The Rochester education cuts have roiled the city and state.

“When I say it was ‘disheartening, I can’t underplay that.’  We’re a ‘high’ poverty area ‘and we try to provide normalcy and consistency for our students,’” she said. “It was ‘horrible.’”

Originally the School Board approved 155 layoffs on the eve of Winter break - including 109 Teachers and 10 Para-Professionals.

Union actions, student walkouts and some found grant money have helped to restore some of those positions.

Services and outreach have been provided by the Union to help those who lost jobs.

“Our Members ‘are learning this a precise example of the importance of not being alone,’” said Adam Urbanski, who serves as President of the 3,400-member RTA.

Beneath the pain of the immediate loss, students and staff are angry at how the district has long been underfunded by New York State Foundation Aid, as many others have as well.

According to the foundation formula, designed to provide enough state aid to high need districts to deliver a “sound, basic education,” the district is owed $86 million.

The anger spilled over in a mid-day rally at the Legislative Office Building.

Student Sarah Adams, who helped coordinate student walkouts in December, said: “After two weeks of ‘blood, sweat and many, many tears, our board voted to go ahead with those cuts.’  My peers and I ‘would be thriving with that foundation aid.’”

Another student, Holly Beckwith Cohen, said: “Failing to fund our schools, ‘you are telling us that our needs are not (a priority).’  ‘And we hear you!’  ‘We feel abandoned!’”

The issue has drawn national attention.

“Those ‘who have the least need the most,’” said Randi Weingarten, the President of the American Federation of Teachers (AFT), at the rally.

She said Rochester is part of a national problem where corporations have closed shop and turned their backs on many areas.

“The reason I am here is that Rochester is a community ‘that should be focused on, not abandoned,’” Weingarten said.

To Continue Reading This Labor News Report, Go To: www.nysut.org/news/2020/january/rochester-community-to-lawmakers-dont-abandon-us