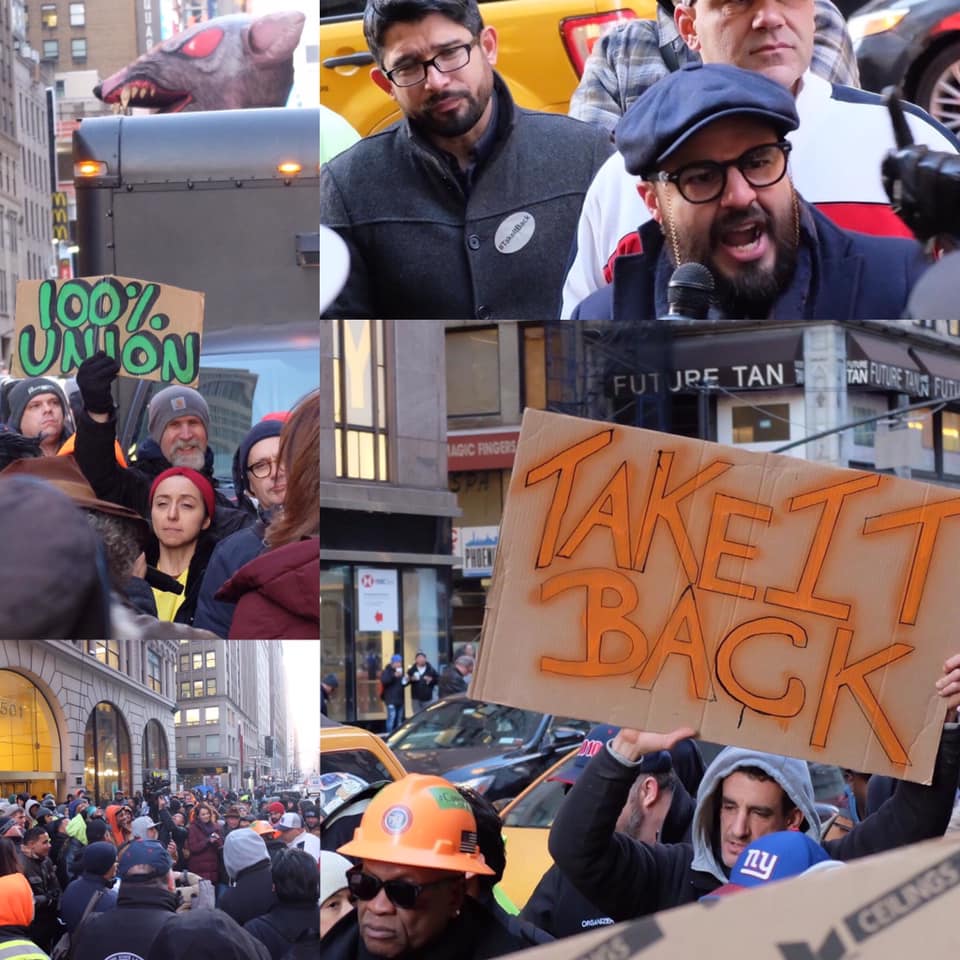 (NEW YORK CITY) - The last time Trade Unionists and Non-Union Workers teamed up in November to demand one of the largest construction management companies in the city cough up $70,000 in unpaid wages - the company coolly thumbed its nose at protesters and barred elected officials from entering its Seventh Avenue offices, but that wasn’t the end of it.

This time, however, cops kept protesters far away from New Line’s high-rolling offices, relegating the vocal demonstrators to a specially prepared pen waiting for them across the street.

“New Line made ($208 million) last year,” City Council Member Francisco Moya (Democrat-21st District) jeered. “Now we’re out here in the streets (fighting) over ($57,000) - the ‘average entry-level position for someone at New Line. Yet, our Workers are begging to get paid to put food on the table.’”

Six Construction Workers who were part of a group of more than 20 Non-Union Workers stiffed on a New Line job site in Hallets Point, Queens last year, have reportedly been paid since Trade Unionists and Unorganized Workers last showed up on the company’s doorstep back on November 19th.

“Not all the Workers have been paid,” Council Member Carlos Menchaca (Democrat-38th District) said at the January 8th rally. “Greedy developers ‘have been taking advantage of our Workers.’  ‘It doesn’t matter what you look like because they’re going to take advantage of you.’”

Trade Unionists and Non-Union Construction Workers are united against rampant Wage Theft in the industry - just one of a myriad of Worker abuses that Trade Unionists say results when greedy developers go “Open Shop” and seek to maximize profits by exploiting especially vulnerable Non-Union Labor.

Since 2014, New York City Comptroller Scott Stringer’s Office has recovered more than $14.5 million for Workers cheated on the job and assessed nearly $30 million in underpayment interest and penalties, debarring 58 contractors along the way.

“We’re ‘going to keep coming out for every Worker in our city to make sure that when you’re on a construction site you get training, you get apprenticeship and a chance to learn on the job,’” Council Member Ben Kallos (Democrat-5th District) said. “(And) ‘that you have a Shop Steward to come to when (bosses) tell you to do something dangerous.’  ‘That you have protections on the job, that you get paid - not a Minimum Wage, not just a Living Wage - but a Prevailing Wage.’”

To Continue Reading This Labor News Story, Go To: http://laborpress.org/take-it-back-trade-unionists-nonunion-workers-united-in-ongoing-fight-against-wage-theft/