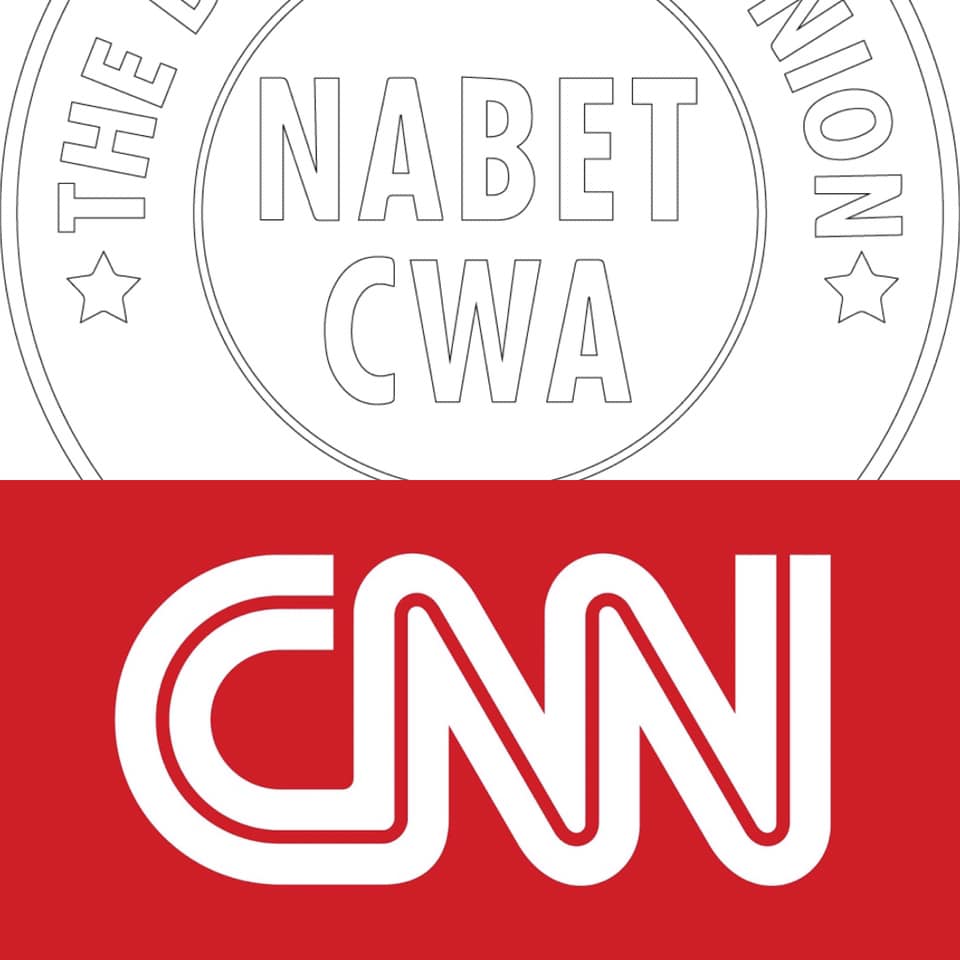 (WASHINGTON, D.C.) – The National Association of Broadcast Employees and Technicians (NABET)-Communications Workers of America (CWA), its Local 11 (New York) and Local 31 (Washington, D.C.) have negotiated one of the largest back pay settlements in the 84-year history of the National Labor Relations Board (NLRB).

The agreement requires CNN America, Incorporated to pay a total of $76 million to hundreds of Broadcast Technicians who were fired when CNN terminated its sub-contract with Union-represented Employees at Team Video Services (TVS).

The settlement provides substantial justice to Workers who have been waiting more than 15 years to be made whole for the losses that they suffered as a result of CNN’s unlawful conduct, Union Officials said.

“After ‘more than’ fifteen years, this settlement agreement ‘finally delivers justice’ for Workers ‘who experienced serious hardship in their lives due to CNN’s Union-Busting Practices,’” NABET-CWA President Charlie Braico said.

“This ‘incredible settlement in Workers’ favor should send a very clear message to CNN and to other employers that Union-Busting is illegal and has consequences,” Braico said.

NABET-CWA had advised the Democratic National Committee (DNC), Democratic Presidential Candidates who qualified for the debate, and CNN of its intention to picket the event.

“We are ‘grateful’ to Democratic National Committee Chair Tom Perez for his help ensuring that this debate will proceed without the disruption of a Labor Dispute,” CWA President Chris Shelton said. “The Democratic Presidential Candidates ‘demonstrated their commitment to Working People by intending to honor the picket line.’”

Under the terms of the agreement, CNN will pay $76 million to the NLRB, which in turn will make payments to the affected Workers.

The payments will compensate them for the protracted length of the case and the adverse tax consequences from the size of the payouts.

NABET-CWA will withdraw all pending charges against CNN.

AT&T CEO Randall Stephenson and Warner Media CEO John Stankey played a constructive role in the settlement talks between NABET-CWA and CNN, which is part of AT&T’s Warner Media Division.

To Continue Reading This Labor News Story, Go To: https://cwa-union.org/news/releases/nabet-cwa-negotiates-historic-76-million-back-pay-settlement-cnn?fbclid=IwAR1C36M2oMaO7YWpMwfXdNSCwNUzRIGiKnOo4-mZkJ8ZEEWOHXZTMh9nyIM