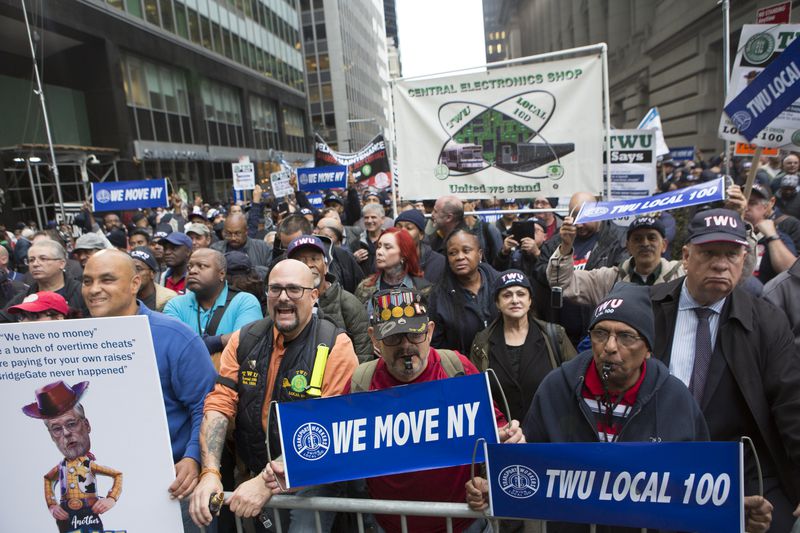 (NEW YORK CITY) - New York City’s Transit Workers on Thursday (January 9th) overwhelmingly approved a contract deal between their Union and the Metropolitan Transportation Authority (MTA), ending a bitter negotiation between the two sides that dragged on for more than six months.

Roughly 15,300 of the 35,650 Transport Workers Union (TWU) Local 100 Members who were eligible to vote weighed in on the deal via mail-in ballots - and about 66% of them voted to ratify the contract, according to the American Arbitration Association, which tallied the vote.

“The MTA was ‘determined to win huge’ concessions - like ‘doubling’ our paycheck deductions for health care, ‘turning full-time jobs into part-time positions’ and paying overtime ‘after’ forty hours ‘instead of eight,’” TWU Local 100 President Tony Utano said. “We ‘did more than just hold our ground - we moved forward.’"

The deal comes with a 2% raise for Workers in 2019, which will be paid out retroactively.

By the time the contract expires, Workers will be taking home 9.8% more than their current pay.

Bus Drivers who operate long articulated buses will also get a $1 per-hour raise.

Health Care Premiums for Workers will remain the same under the new arrangement, but they’ll be forced to pay higher co-pays for emergency room visits and non-generic prescription drugs.

The deal encourages Workers to use urgent care clinics instead of hospital emergency rooms.

MTA Budget Officials believe the health care changes will save the agency about $27 million each year.

The contract also allows Workers to more easily swap shifts with one another, and comes with a Memorandum of Understanding (MOA) that the two sides will work to increase Worker availability by 1.5 days per year.

MTA data shows that Transit Workers missed an average of 54 days in 2018, which includes vacation time, sick days, time off for workplace injuries and the time it takes transit supervisors to reinstate Workers who return from leave.

The MTA hopes the increases in Worker availability will reap another $17 million in annual savings.

The contract must still be approved by the MTA Board at a meeting later this month.

Local 100 had launched an aggressive public campaign that vilified MTA Leadership after the previous contract expired.  Union Officials on several occasions last year used scrupulous “safety inspections” to slow down bus service across the city - and one Local 100 Officer even threatened to “tar and feather” MTA chairman Pat Foye.

To Read This Labor News Story In Its Entirety, Go To: www.nydailynews.com/new-york/ny-transit-workers-ratify-contract-mta-20200109-l3eul2dagvakjhwivmbia2vzee-story.html?fbclid=IwAR2hW_Hay65-BHxMctAdDSZrLClO8GSPGGPncHhQf31YMztrt_4MERBPUpc