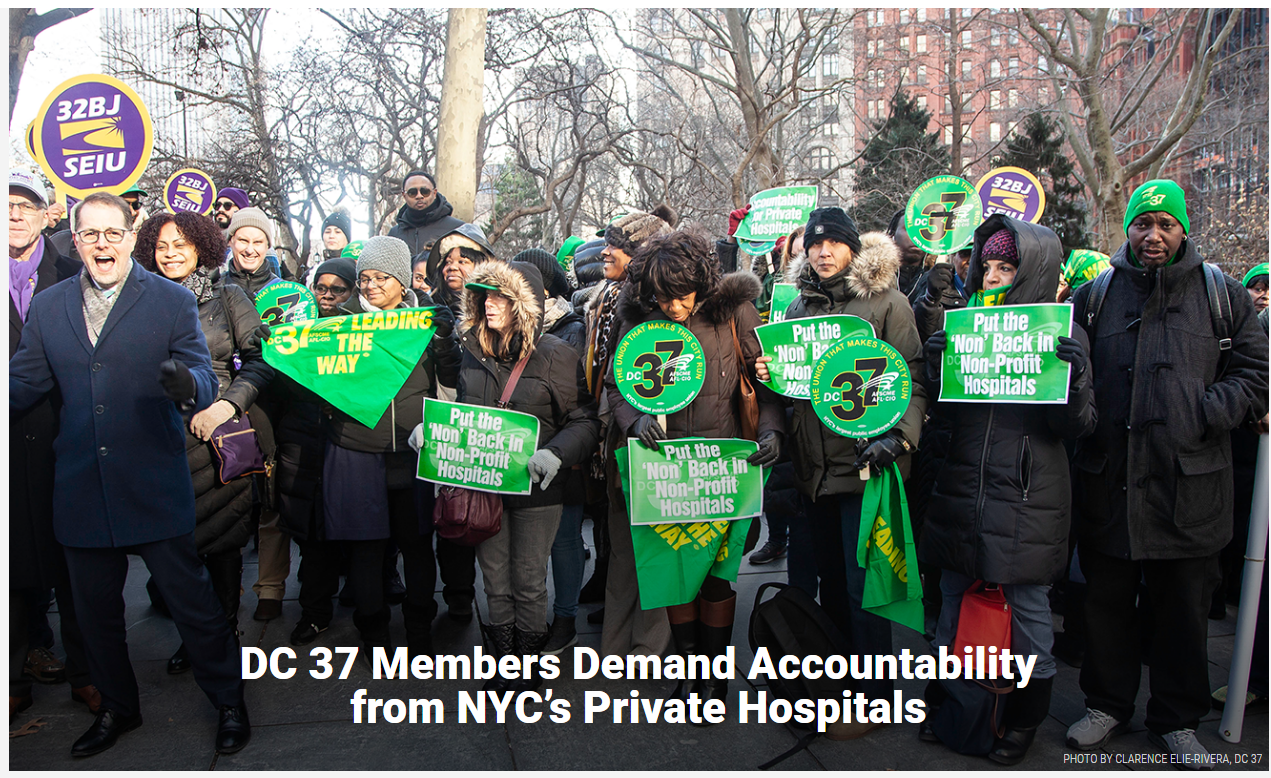 The Unions testified about the effects of skyrocketing costs for health care and asked the city council to curb practices by hospitals and health care providers that unreasonably ratchet up costs for needed care.

“The ‘single factor that’s had the most profound, negative impact on health care coverage in New York City is the cost of in- and out-patient care provided by the city’s non-profit, private hospitals,’” DC 37 Executive Director Henry Garrido said. “DC 37 and our Brother and Sister Unions that make up the Municipal Labor Committee ‘are doing our part to reduce hospital bills with changes in the design of our health plans, but the private hospital systems are not doing their part to contain costs.’”

Garrido noted that under the current system: A hip replacement procedure can cost $83,000 at one hospital and $56,000 at another; Hospitals that serve Medicare and Medicaid patients receive lower prices in the private market, while hospitals that serve insured patients have higher prices; and on average, higher-priced hospitals in the New York Metro Area are 2.5 times higher than the lowest priced hospitals.

“Adding ‘insult to injury is the fact that hospital executive compensation has soared along with the cost of care,’” Garrido said. “In 2018, the top ten highest paid hospital CEOs received combined salaries, perks and other compensation ‘totaling more than’ ($53 million).  At the same time, the city and state also offer the hospitals hundreds of millions of dollars in tax breaks.”

Garrido made four recommendations to change the status quo: (1) The city must investigate private hospitals with high-cost services that decline to treat uninsured and under insured, low-income and Immigrant Populations; (2) The city and the state should re-evaluate property tax exemptions given to private hospital systems that are unwilling to treat populations that can least afford their services: (3) Officials should create a group that includes Labor Unions, health care advocates, consumers, health care institutions and insurance providers to discuss the cost and quality of health care; and (4) The City Council should monitor all hospitals (private and public) and health plans to measure disparities in pricing and care.

To Directly Access This Labor News Story, Go To: www.afscme.org/now/dc-37-members-demand-accountability-from-nycs-private-hospitals