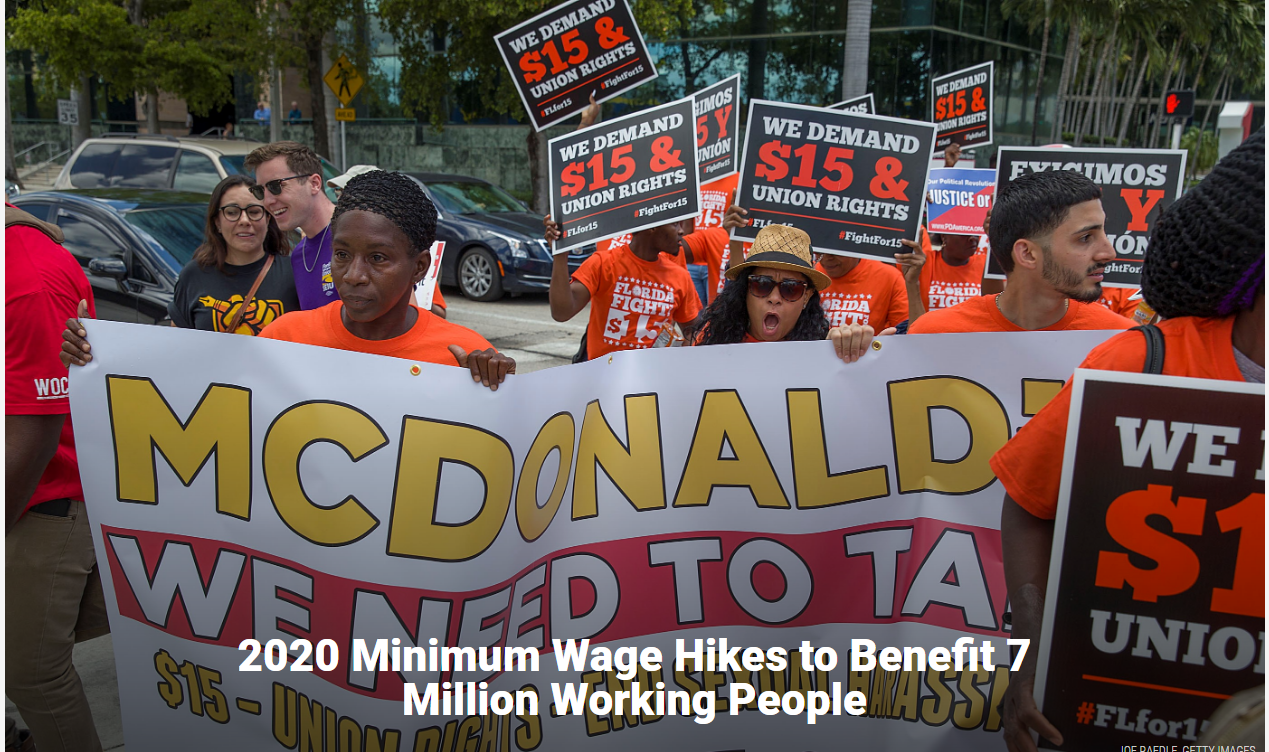 2020 brings good news for millions of Working Americans: Nearly seven million of them are in line to get pay raises this year thanks to state and local Minimum Wage hikes.

A total of 47 jurisdictions - 21 states and 26 cities and counties - raised their minimum wages as of January 1st and in 17 of these jurisdictions, the Minimum Wage will reach or exceed $15 an hour.

This underscores that states and localities - not Uncle Sam - are taking the lead in helping reduce Income Inequality.

Low-Wage Workers aren’t seeing the biggest pay bumps in a decade just because of rising demand for their services.

“They are getting paid more because laws now require employers to pay them more,” according to The Washington Post.

The hourly minimum went up by as little as 10 cents an hour in Florida to $1.50 in Washington State, according to the Economic Policy Institute (EPI).

States from Alaska to Alabama and from California to Maine recognize that Working People need a wage boost to survive in an economy that’s rigged in favor of the wealthy and corporations.

The American Federation of State, County & Municipal Employees (AFSCME), a strong advocate of the Fight for $15 Movement, has long called for raising the Federal Minimum Wage to that amount.

Though there was significant momentum toward that goal in 2019 - the House of Representatives, led by a Pro-Worker majority, passed the Raise the Wage Act last July - the measure has stalled in the Senate, which is controlled by Anti-Worker politicians.

The Senate hasn’t taken up the House Bill or acted on identical Senate legislation.

“The Federal Minimum Wage has stayed flat for the last decade, while corporate profits and CEO compensation have skyrocketed,” AFSCME President Lee Saunders said back in July, after the House passed its bill.

“A $15 Minimum Wage will reduce inequality and strengthen our communities, lifting families out of poverty and putting upward pressure on wages for everyone,” he said.

To Directly Access This Labor News Story, Go To: www.afscme.org/now/2020-minimum-wage-hikes-to-benefit-7-million-working-people