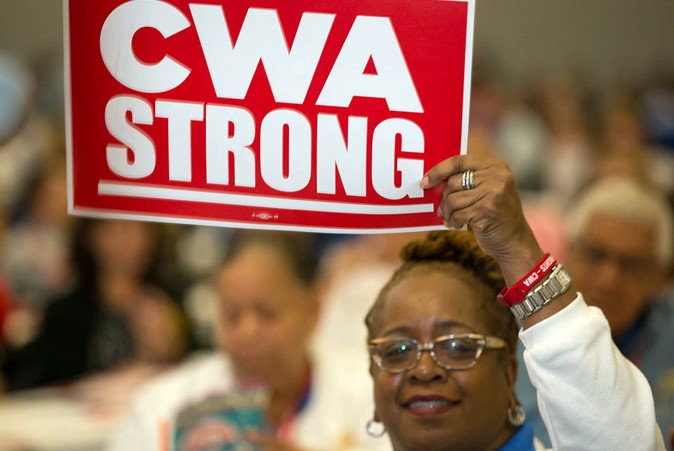 Following years of being stalled in Albany, the Bill passed the Assembly 130-to-18 on June 19th and the State Senate on March 12th in a bipartisan 58-to-3 vote.

Any call center company that has taken loans, grants or tax breaks from New York State will forfeit those benefits if they move 30% of their jobs overseas.

In addition, the New York State Commissioner of Labor will establish and publicize a list of companies that engage in this behavior, and these companies will be negatively affected in any bid for future State Call Center Work.

“We ‘applaud’ the Governor ‘for taking action today to protect’ New York’s Call Center Workers,” CWA District 1Vice President Dennis Trainor said. “And we also want to give a ‘special thanks ‘to Senate Majority Leader Andrea Stuart Cousins, Assembly Speaker Carl Heastie, and to our ‘committed ‘sponsors ‘who fought for this bill’ – Assembly Member Linda B. Rosenthal and Senator Tim Kennedy ‘for coming together to protect’ Working Families and communities across New York.  Since 2006, New York has lost over (40,000) call center jobs.  ‘It is long past time New York stopped rewarding companies that send call center jobs overseas with taxpayer dollars.’”

Said Governor Cuomo.: “As technology advances, ‘more and more call centers are sending jobs overseas, leaving Employees scrambling to find work to support themselves and their families.’  This legislation ‘will protect’ New York’s Call Center Workers ‘by putting in place serious financial disincentives for employers who move jobs out of New York.’”

"With final agreement on the New York Call Center Jobs Act, New York State ‘is making it clear that we expect results when expending state dollars on economic benefits,’" said Senator Tim Kennedy (Democrat/Working Families-Buffalo). "As the lead sponsor of this bill for years, ‘I've been proud to stand with CWA Leadership and our Brothers and Sisters in (Organized) Labor to ensure New York taxpayers are not left footing the bill when corporations outsource jobs overseas after exploiting state contracts and incentives.’  I want to ‘thank’ my colleagues in government for their diligent work to secure this agreement ‘and I am pleased to see this legislation signed into law.’"

“New York call center employers ‘have been sending good, Middle Class jobs out of our country, but that ends today,’” Assembly Member B. Linda Rosenthal (Democrat/Working Families-Manhattan) said. “As the ‘proud sponsor’ of this legislation since 2013, I am ‘elated that this new law will keep jobs local and repair communities all over the state.’  ‘It’s time we help hard-working New Yorkers who have been hurt by these corporate incentives that encourage companies to ship jobs out of our country.’  Finally, Call Center Workers ‘will be protected in New York.’  ‘Working with CWA to protect New Yorkers' jobs has been a pleasure.’"

“Today is a ‘great’ day,” said Brittni Everett, a Call Center Worker from Albany. “Call Center Employees like me ‘will no longer live in fear of our jobs being shipped overseas.’  ‘The voices of New York Workers drowned out those of the big corporations who have prioritized profits over people.’  ‘I am so proud of our elected officials for standing up for Call Center Workers who just want to be able to rely on their good, Middle Class jobs.’  As a ‘single’ mother, ‘I know the importance of this legislation first hand and I know how it will personally affect me and my child.’  ‘Finally, I know my job is safe and stable.’  This is a ‘huge’ victory.”

To Directly Access This Labor News Story, Go To: https://district1.cwa-union.org/news/releases/gov-cuomo-signs-historic-legislation-stop-call-center-companies-shipping-jobs-overseas?fbclid=IwAR2leL1Yqs4eA4mGDr9jux5Ks5D_DZtdLHgTjP5x1WV35wp9TOLnUy9KkKA#.Xg5ZnjUxgQo.facebook