Why Do Working People Continue To Vote For Republicans In Red States Where Worker Pay Has Been Cut By More Than $1 Billion? 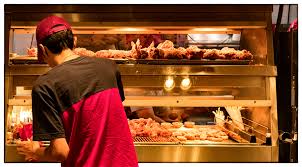 (WASHINGTON, D.C.) - Over the Summer, the House voted to incrementally raise the Minimum Wage to $15 an hour.  If the Senate had passed the bill, it would have been the first Federal Minimum Wage increase in more than a decade - far too long for residents of the 21 states that don’t have their own higher Minimum Wage.

And here’s another sad truth: Plenty of cities in those states have tried to raise their Minimum Wage, only to be stymied by state lawmakers.

That’s thanks to state preemption laws that keep localities from adopting all kinds of policies, from Paid Sick Leave to local fracking bans to wage increases.

Preemption Laws have exploded in recent years as predominantly Republican State Legislatures, bolstered by Right Wing Corporate Groups like the American Legislative Exchange Council (ALEC), look to curb anything progressive that comes out of city governments.

One particularly notorious example took place in St. Louis, which, after years of organizing, passed an ordinance in 2015 to gradually raise the city’s Minimum Wage to a modest $11 an hour.

Business interests had spent months tying the wage increase up in courts, but Workers finally won.

Then, just weeks after the first wage raise went into effect in 2017, Missouri’s Republican Legislature passed a preemption law that nullified any Minimum Wage that exceeded state laws.

Workers in St. Louis who’d been bumped up to $10 an hour saw their pay cut almost immediately.

A ballot initiative to raise Missouri’s Statewide Minimum Wage overwhelmingly passed in 2018, finally winning Workers a raise, but the troubling preemption law is still on the books, which means cities and counties still can’t set their own wage floors.

Missourians aren’t the only ones whose lawmakers are trying to deny them a raise.

Nearly 346,000 Workers have been affected by preempted minimum wages in 12 cities and counties.

More than half of the Workers affected by preemption in those localities are women.

And in Birmingham, Miami Beach, and St. Louis, which were all preempted, Workers of Color are the overwhelming majority.

Most of these localities also have poverty rates far higher than the U.S. average.

To Continue Reading This Labor News Story, Go To: https://coloradotimesrecorder.com/2020/01/red-states-cut-worker-pay-by-over-1-billion/20381/?fbclid=IwAR2hAXcsFXcPyOY9J0lXMyNN2s91b4ZQJhl0Ttp9IhZNOE1KbkFFfFZoQek